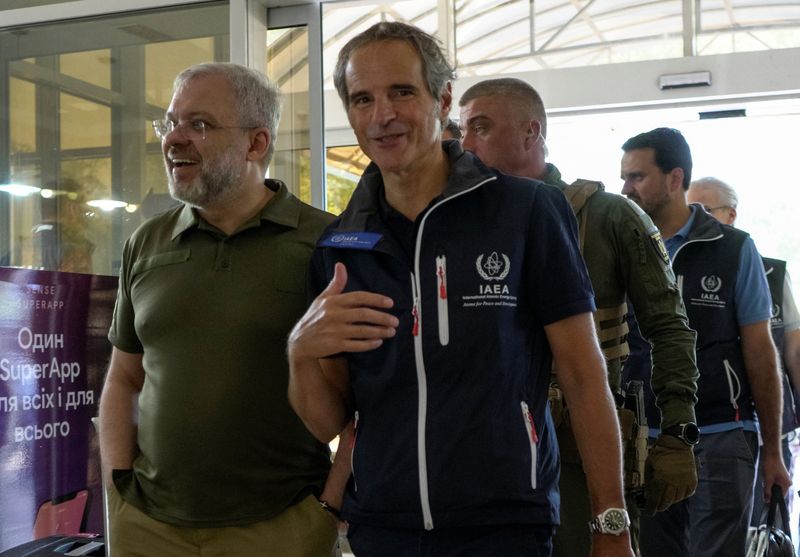 ZAPORIZHZHIA, Ukraine (Reuters) – The U.N. nuclear agency chief said his experts were “not going anywhere” on Thursday, after they crossed the front to Russian-held territory in Ukraine to reach Europe’s biggest atomic power plant, where both sides warn of potential catastrophe.

An IAEA inspection team braved intense shelling to reach the Zaporizhzhia nuclear power plant, arriving after a delay of several hours in a large convoy with a heavy presence of Russian soldiers nearby.

“We are not going anywhere. The IAEA is now there, it is at the plant and it is not moving – it’s going to stay there,” IAEA head Rafael Grossi, who personally led the mission, told reporters after returning to Ukrainian-held territory.

He said a group of IAEA experts had stayed behind at the plant and would provide an impartial, neutral and technically sound assessment of the situation.

“I worried, I worry and I will continue to be worried about the plant until we have a situation which is more stable, which is more predictable.”

Ukraine and Russia accuse each other of creating a risk of atomic catastrophe by shelling the plant, where the situation has been unravelling in recent weeks.

Kyiv also accuses Russia, which seized the plant early in the war, of using it to shield its forces, and of planning to steal its output by hooking it up to the Russian power grid. Moscow denies this but has so far rejected international calls to withdraw its troops from the plant.

Video footage released by Russia’s state news agency RIA showed IAEA inspectors, including Grossi, wearing safety helmets and being shown around the site by Russian energy officials, who pointed out what were described as damaged water pipes.

Russia and Ukraine have accused each other of trying to sabotage the IAEA mission to the plant, which sits on the south bank of a huge reservoir on the Dnipro River that divides Russian and Ukrainian forces in central southern Ukraine. Since the early days of the conflict, the plant has been controlled by Russian troops but operated by Ukrainian staff.

Russia’s Foreign Minister Sergei Lavrov said Moscow was doing everything to ensure that the plant could operate safely, and for the IAEA inspectors to be able to complete their tasks.

Earlier, Ukraine’s state nuclear company Energoatom said Russian shelling had forced the shutdown of one of the two reactors still operating at the site.

As the inspectors arrived at the frontline, Russian and Russian-installed local officials accused Kyiv of sending troops on boats near dawn to try to capture the plant on Thursday, and of shelling the nearby Russian-held city of Enerhodar.

Kyiv accused the Russians of staging those incidents to blame Ukraine and block the visit.

A Reuters reporter in Enerhodar said a residential building was struck by shelling there, forcing people to take cover in a basement. It was not possible to establish who had fired. Reuters reporters in Ukrainian-held Zaporizhzhia city saw flashes in the sky of explosions in the morning.

“This morning the situation was pretty difficult but as I said, having come this far, I was not going to stop, and with my courageous team we moved in,” Grossi said.

“There were moments where fire was obvious, heavy machine gun, artillery mortars,” he said, describing the firing as “really very concerning I would say for all of us”.

The head of Ukraine’s state nuclear company said the IAEA visit would be successful if it led to the “demilitarisation” of the facility.

Energoatom chief Petro Kotin told Reuters at a Ukrainian-controlled checkpoint on the road to the plant that Ukrainian authorities were making “all efforts” to switch back on the plant’s fifth reactor after it shut down due to shelling early on Thursday.

The nuclear plant supplied more than a fifth of Ukraine’s electricity before the war, and is a vital asset for Ukraine as it braces for a brutal winter of energy shortages.

In recent days, Ukraine has launched a major counter-offensive to recapture territory in southern Ukraine, mainly further down the Dnipro in neighbouring Kherson province.

Ukrainian officials have welcomed the IAEA visit, expressing hope that it will lead to the demilitarisation of the plant.

Russian-installed officials have suggested that the team from the U.N. nuclear watchdog would have only a day to inspect the plant, while the mission had prepared for longer.

Both sides have claimed battlefield successes in the new Ukrainian push to recapture territory in the south, although details have been scarce so far, with Ukrainian officials releasing little information about their advance.

“It is a very slow process, because we value people,” said Oleksiy Arestovych, an adviser to Zelenskiy, referring to the Ukrainian offensive. Moscow has denied reports of Ukrainian progress and said its troops had routed Ukrainian forces.

Millions of people have fled Ukraine, thousands have been killed and cities have been reduced to rubble in what Kyiv and the West call Russia’s unprovoked war of agression. Moscow calls its actions a “special military operation” to rid Ukraine of nationalists and protect Russian-speaking communities.

Schoolchildren returned to desks in some areas for the start of the Ukrainian school year. Ukrainian children who fled the country also started new schools across central Europe for the first time on Thursday.

But in Mykolaiv near the frontline in southern Ukraine, children went to their bombed-out school only to take their books home. Most schools in the area will stay shut.

“My heart is broken because I love this school,” said Viktoria Poliakova, deputy head teacher, as she looked at the damage.

Designing my life, part one: Building a compass