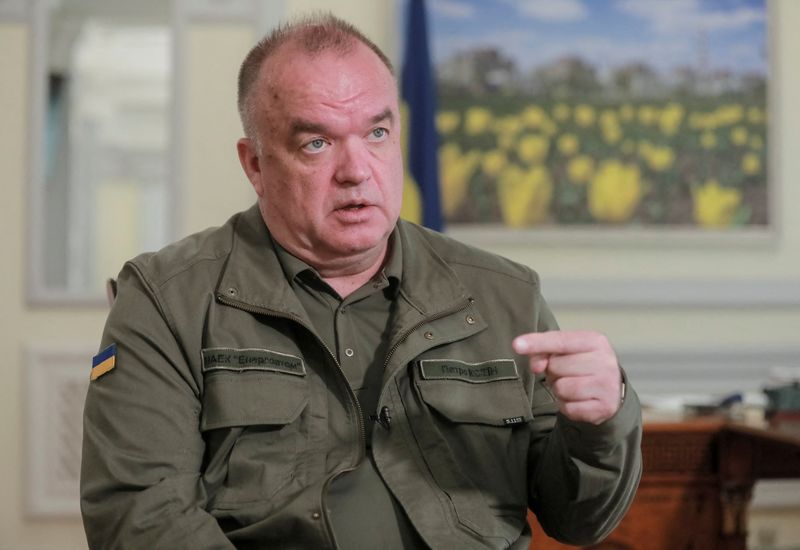 KYIV (Reuters) – Ukraine’s state nuclear chief said on Monday it was vital that a mission by UN inspectors to the Zaporizhzhia nuclear plant led to the end of Russia’s occupation of the facility and called for new missions to the site, including by UN peacekeepers.

The International Atomic Energy Agency is drawing up a report after its inspectors crossed the front line last week to reach the imperilled facility that Ukraine and Russia have accused each other of shelling, risking a nuclear disaster.

Two IAEA experts are now set to stay on indefinitely at the facility in southern Ukraine – Europe’s largest nuclear plant – which was captured by Russian troops at the beginning of March shortly after their invasion.

In an interview, Petro Kotin, head of Ukraine’s state nuclear company Energoatom, told Reuters that the establishment of a permanent mission was a “good” step but that the “root of the problem” remained as Russian troops controlled the site.

“We need results from this mission actually. These results should (resolve) the whole situation: de-occupation. If not, then we must have some kind of viable results,” he said.

He called the situation at the plant “very dangerous” and unprecedented because of the deterioration of the power lines linking the facility to the Ukrainian grid, and said Kyiv expected to hear more than expressions of concern from the IAEA.

“This is a peculiar situation. All the experts and (IAEA chief Rafael) Grossi himself understand that … what is needed to be done is the de-occupation. Still they can’t directly propose this because of the limitation of the mandate,” he said.

The IAEA has described its mission as technical in nature.

A few hours after Kotin spoke in his office in Kyiv, Energoatom said the plant’s sixth and last functioning reactor had been disconnected from its grid due to what it said was Russian shelling. There was no immediate response from Russia.

Kotin said it would be fraught for Ukraine if it has to get through this winter without the facility, which supplied more than a fifth of Ukraine’s electricity needs before the war.

“If you don’t have the Zaporizhzhia nuclear power plant, this will be a dangerous winter. We need (it),” he said.

Kotin, who was dressed in military fatigues like all Ukraine’s wartime officials, proposed increasing the number of IAEA inspectors at the nuclear plant.