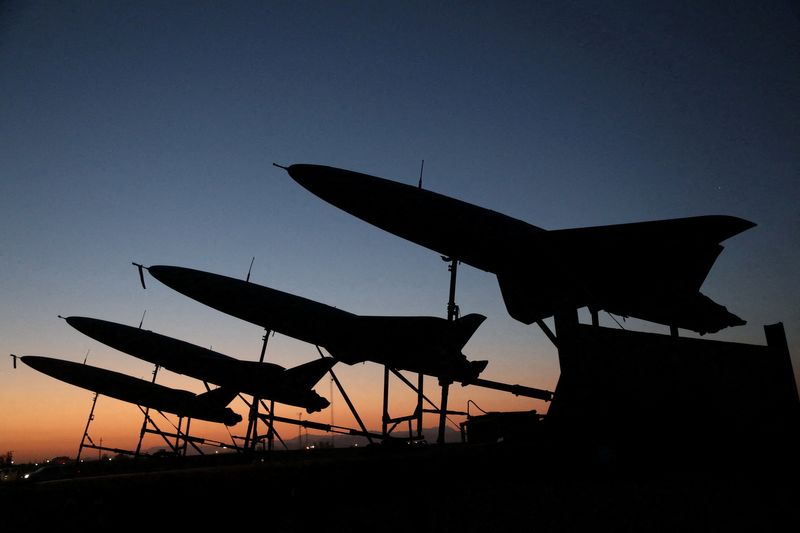 © Reuters. FILE PHOTO: A view of drones during a military exercise in an undisclosed location in Iran, in this handout image obtained on August 24, 2022. Iranian Army/WANA (West Asia News Agency)/Handout via REUTERS

(Reuters) – Iran acknowledged for the first time on Saturday that it had supplied Moscow with drones but said they were sent before the war in Ukraine, where Russia has used drones to target power stations and civilian infrastructure.

Iranian Foreign Minister Hossein Amirabdollahian said a “small number” of drones had been supplied to Russia a few months before Moscow’s forces invaded Ukraine on Feb. 24.

In Iran’s most detailed response to date on the drones, Amirabdollahian denied Tehran was continuing to supply drones to Moscow.

“This fuss made by some Western countries that Iran has provided missiles and drones to Russia to help the war in Ukraine – the missile part is completely wrong,” the official IRNA news agency quoted him as saying.

“The drone part is true and we provided Russia a small number of drones months before the Ukraine war,” he said.

The official IRNA news agency quoted Amirabdollahian as saying Tehran and Kyiv had agreed to discuss allegations about the use of Iranian drones in Ukraine two weeks ago but the Ukrainians did not show up at the agreed meeting.

“We agreed with the foreign minister of Ukraine to provide us with documents they have that Russia used Iranian drones in Ukraine,” Amirabdollahian said, but the Ukrainian delegation pulled out of the planned meeting at the last minute.

The Ukrainian Foreign Ministry did not immediately reply to a written request for comment.

The Iranian foreign minister repeated that Tehran would “not remain indifferent” if it were proven that Russia had used Iranian drones in the war against Ukraine.

The European Union last month agreed new sanctions on Iran over its drone deliveries to Russia, and Britain imposed sanctions on three Iranian military figures and a defence manufacturer for supplying Russia with drones to attack civilian and infrastructure targets in Ukraine.