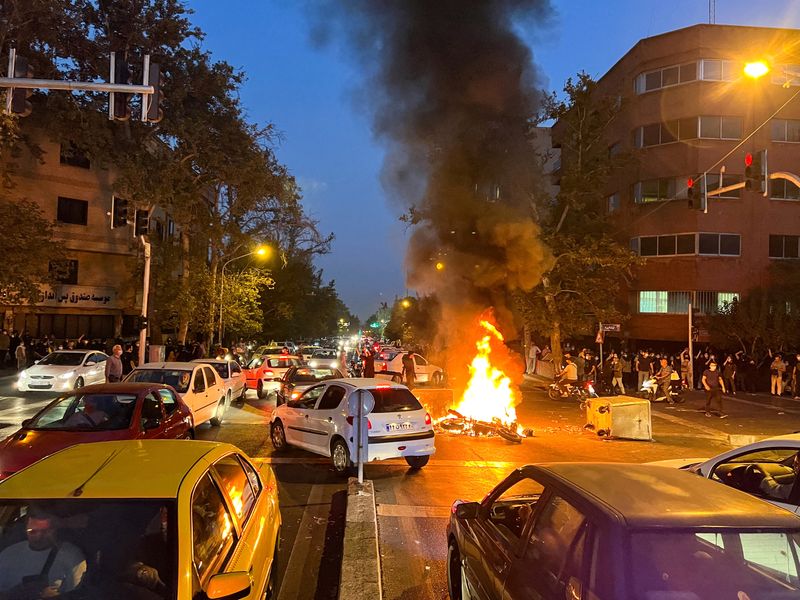 © Reuters. FILE PHOTO: A police motorcycle burns during a protest over the death of Mahsa Amini, a woman who died after being arrested by the Islamic republic’s “morality police”, in Tehran, Iran September 19, 2022. WANA (West Asia News Agency) via REUTERS

DUBAI (Reuters) – Protesters across Iran defied a nearly month-long crackdown on Saturday, activists said, chanting in the streets and in universities against the country’s clerical leaders in a sustained wave of anger at the death of Mahsa Amini.

The protests sweeping Iran since Amini – a 22-year-old woman from the country’s Kurdish region – died on Sept. 16 while being held for “inappropriate attire” pose one of the most serious challenges to the Islamic Republic since the 1979 revolution.

Although the unrest does not appear close to toppling the system, the protests have widened into strikes that have closed shops and businesses, touched the vital energy sector and inspired brazen acts of dissent against Iran’s religious rule.

A video posted by the Norway-based organisation Iran Human Rights purported to show protests in the northeastern city of Mashhad, Iran’s second most populous city, with demonstrators chanting “Clerics get lost” and drivers honking their horns.

Videos posted by the group showed a strike by shopkeepers in the northwestern Kurdish city of Saqez – Amini’s home town – and female high school students chanting “Woman, Life, Freedom” on the streets of Sanandaj, the capital of Kurdistan province.

Protests were also reported in Isfahan, in central Iran, and in the southeast of the country.

Reuters could not independently verify the videos. Phone and internet services in Iran have been frequently disrupted over the last month and internet watchdog NetBlocks reported “a new major disruption” shortly before Saturday’s protests began.

Amini died in custody after she was detained by morality police for violating strict religious regulations requiring women to be modestly dressed.

Human rights groups say more than 200 people have been killed in the crackdown nationwide, including teenage girls whose deaths have become a rallying cry for more demonstrations demanding the downfall of the Islamic Republic.

Protesters called on Saturday for demonstrations in the northwestern city of Ardabil over the death of Asra Panahi, a teenage girl from the Azeri ethnic minority who activists say was beaten to death by security forces.

Officials denied the report and news agencies close to the Revolutionary Guards quoted her uncle as saying the high school student had died of a heart problem.

Iran has blamed the violence on enemies at home and abroad, including armed separatists and Western powers, accusing them of conspiring against the Islamic Republic and denying that security forces have killed protesters.

In his toughest warning yet to protesters, Supreme Leader Ayatollah Ali Khamenei – whose downfall many demonstrators have demanded – said on Friday that no one should dare think they can uproot the Islamic Republic.

State TV has reported at least 26 members of the security forces have been killed. The Tehran commander of the Basij militia forces that have deployed against protesters said in Tehran that three Basij had been killed and 850 more injured.

In Tehran’s Shariaty technical college, female students chanted slogans against the four decade-long clerical rule. “So many years of crimes, death to this religious leadership”, they chanted, according to a video posted on social media.

Iran’s foreign minister spoke on Friday with the European Union’s top diplomat Josep Borrell, who urged Tehran to stop the repression of protesters.

In a phone call, Hossein Amirabdollahian told Borrell Iran allowed peaceful protests and its government enjoyed popular support, state media said. “Therefore, we recommend that Europeans look at the issue with a realistic approach,” he said.

New EU sanctions on some 15 Iranians are expected to be approved on Monday, diplomats said. Asset freezes and travel bans will have little concrete impact on the individuals, but diplomats said it sent a political message and showed growing international concern about the crackdown.

As UK’s Truss fights for job, new finance minister says she made mistakes By Reuters

18 Amazing January Bulletin Boards To Welcome in the New Year