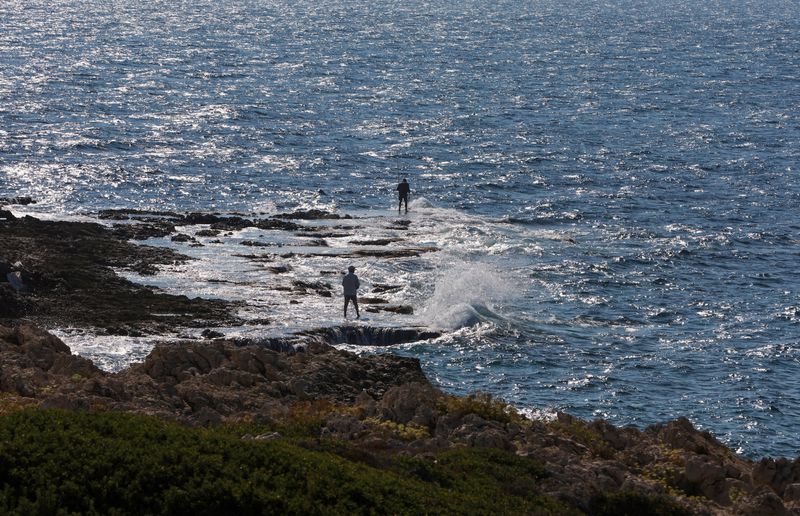 By Maya Gebeily and Maayan Lubell

BAABDA/JERUSALEM (Reuters) -Israeli and Lebanese leaders signed a landmark U.S-brokered agreement on their maritime boundary on Thursday, marking a diplomatic departure from decades of hostility and opening the way to offshore energy exploration.

Lebanese President Michel Aoun signed a letter approving the deal in Baada, followed by Prime Minister Yair Lapid’s signature in Jerusalem, with a handover ceremony of less-senior delegations set to take place at the UN peacekeeping base in Naqoura along the border.

Lapid hailed the deal as a “tremendous achievement” and Lebanese negotiator Elias Bou Saab said it marked the beginning of “a new era” between the two sides, which nevertheless remain technically at war.

The accord removes one source of potential conflict between Israel and Iranian-backed Lebanese group Hezbollah and could help alleviate Lebanon’s economic crisis.

After meeting Lebanon’s speaker of parliament Nabih Berri, Amos Hochstein, the U.S. envoy who mediated the negotiation, told reporters he expects the agreement to hold even amid changes in leadership in both countries.

Hochstein referred to both upcoming elections in Israel on Nov. 1 and the end of Aoun’s term on Oct. 31, saying the accord should be kept up “regardless of who is elected very soon as next president of Lebanon”.

An offshore energy discovery – while not enough on its own to resolve Lebanon’s deep economic problems – would be a major boon, providing badly needed hard currency and possibly one day easing crippling blackouts.

While Lebanon and Israel have both voiced satisfaction with having settled a dispute peacefully, prospects for a wider diplomatic breakthrough appear remote.

“We have heard about the Abraham Accords. Today there is a new era. It could be the Amos Hochstein accord,” Saab said, referring to the 2020 U.S.-brokered normalisation of ties between Israel and the United Arab Emirates and Bahrain.

Lapid said: “It is not every day that an enemy country recognises the state of Israel, in a written agreement, in view of the international community,” Lapid told his cabinet in broadcast remarks.

Aoun however has insisted that a deal will lead to a normalisation of ties between the two states.

Amazon workers protest at some German, French sites on Black Friday By Reuters