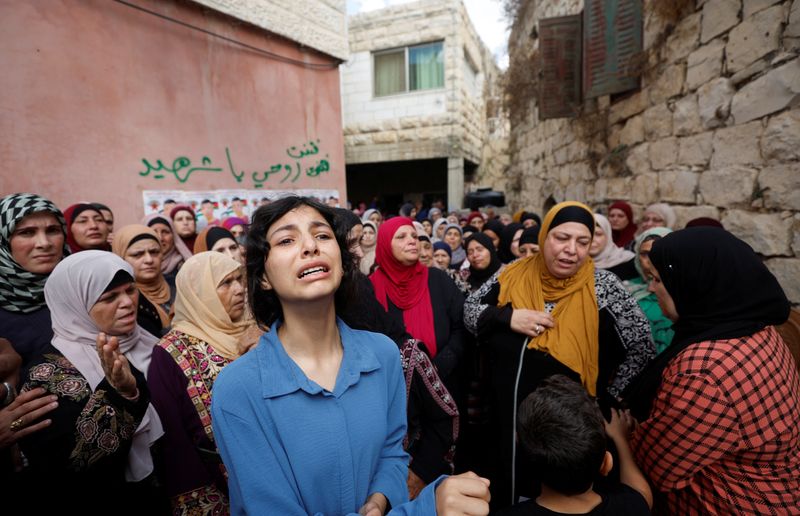 © Reuters. Mourners attend the funeral of Palestinian Mahdi Ladado, 17, who was killed by Israeli forces during clashes, near Ramallah in the Israeli-occupied West Bank, October 8, 2022. REUTERS/Mohamad Torokman

JENIN, West Bank (Reuters) -Israeli forces killed two Palestinian teens on Saturday in clashes that erupted during an arrest raid in the occupied West Bank, Palestinian officials said, the latest incident in recent months around the flashpoint city of Jenin.

The Israeli military said security forces on an operation to arrest a wanted gunman from the Islamic Jihad militant group came under Palestinian fire.

“Dozens of Palestinians threw explosives and Molotov cocktails at the forces and fired at them. The forces fired at armed suspects. Hits were identified,” the military said on Twitter.

The latest in near-daily incursions into Jenin, a militant stronghold, underlined the volatile security climate in the West Bank as Israel heads towards elections on Nov. 1.

Around 80 Palestinians have been killed in the West Bank since Israel launched its Operation Breakwater against militants on March 31 in response to a string of fatal Palestinian street attacks in Israel. The toll includes militants and civilians.

The surge in violence in the West Bank, where Palestinians have limited self-rule, has been one of the worst in years.

U.S.-brokered peace talks aimed at establishing a Palestinian state in the West Bank, Gaza and East Jerusalem, collapsed in 2014 and show no sign of revival.

Israeli security officials have called on Abbas’s Palestinian Authority (PA) to do more to rein in violence.

The PA, increasingly unpopular in the West Bank, says its ability to exert its rule has been systematically undermined by Israel’s incursions.

Abbas’s spokesman Nabil Abu Rudeineh said in a statement that Israel’s government was “delusional” in thinking such actions would promote peace and stability. “Our steadfast people will remain committed to their rights and national principles, defending their land and holy places at all costs.”