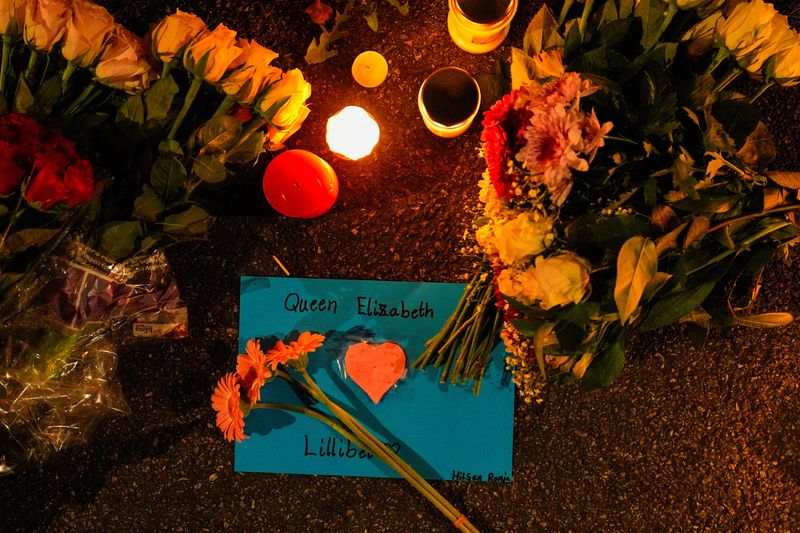 © Reuters. Candles and flowers are placed outside the British embassy following the news of Queen Elizabeth’s death, in Oslo, Norway, September 8, 2022. NTB/Beate Oma Dahle via REUTERS

By Michael Holden and Andrew MacAskill

BALMORAL, Scotland (Reuters) -Britain’s King Charles will on Friday address a grieving nation following the death of his mother Queen Elizabeth after seven decades on the throne, as a period of national mourning began for the only monarch most Britons ever knew.

Charles https://www.reuters.com/world/uk/charles-britains-conflicted-new-monarch-2022-09-08, who raced to be by the side of the queen at her Scottish home on Thursday, was heading back to London with his wife Camilla https://www.reuters.com/world/uk/rottweiler-queen-consort-camillas-rise-shadow-diana-2022-09-08, now Queen Consort, before meeting the prime minister and making a televised statement at about 1700 GMT.

Waking up to their first day without a woman once described by her grandson Harry as “the nation’s grandmother”, thousands gathered again outside Buckingham Palace and Windsor Castle to lay flowers and take photos of the growing memorials.

Billboards across the city displayed messages of condolence and newspapers ran front-page photo tributes to the queen.

Buckingham Palace said there would a period of mourning to be observed by members of the family and the royal household until a week after the funeral, the date of which has not yet been confirmed but is expected in about 10 days time.

Charles will officially be proclaimed king on Saturday at a meeting of the Accession Council held at St James’s Palace followed by proclamations across the nation.

The government has declared a period of national mourning which would continue until the state funeral, and an online book of condolence https://www.royal.uk/send-message-condolence was opened.

At the remote Balmoral Castle in Scotland where she died on Thursday and where her family gathered, people also arrived to pay their respects.

“She was amazing. She was like everyone’s granny. She always managed to capture the mood with her words,” said Kay McClement, 55, who came with a friend to leave flowers at the castle.

Some shed tears as they laid flowers outside the black railings of Buckingham Palace, the queen’s home in central London.

“I brought my young daughter here, because even though she won’t remember it, we can tell her she was here as history was happening,” said railway worker Liam Fitzjohn, 27. “She’s all we ever knew, we will never have a queen like that again.”

The government said it expected large crowds to mass at royal residences and warned of possible delays on some public transport.

Elizabeth was head of state of the United Kingdom and 14 other realms including Australia, Canada, Jamaica, New Zealand and Papua New Guinea.

Charles, who automatically succeeded her as king, said the death was a moment of great sadness for himself and his family.

“I know her loss will be deeply felt throughout the country, the Realms and the Commonwealth, and by countless people around the world,” the 73-year-old said in a statement.

He will meet Prime Minister Liz Truss on Friday afternoon before later addressing the country.

There were gun salutes at London’s Hyde Park and at the Tower of London, and the bells at Westminster Abbey and St Paul’s as well as the Sebastopol Bell at Windsor Castle, captured during the 19th Century Crimean War, tolled.

Regular business in parliament was replaced with a special session for lawmakers to pay tribute to the queen. Parliament will also convene on Saturday, something it rarely does, to approve a message of condolence to the king.

“Since last night’s shocking news, we have witnessed the most heartfelt outpouring of grief at the loss of her late majesty, the queen,” Truss told lawmakers, who held a minute’s silence at the start of proceedings.

“Her late majesty, Queen Elizabeth II, was one of the greatest leaders the world has ever known. She was the rock on which modern Britain was built,” said Truss, who Elizabeth only appointed on Tuesday in her last public duty – the 15th premier of her long reign.

Bereft of its symbol of continuity and resilience, Britain begins its new era with a new king and new prime minister in grave economic crisis and following years of political division.

Long-running industrial action sparked by surging inflation was cancelled during the period of mourning. The BBC national broadcaster said that “as a mark of respect” it had called off its remaining ‘Proms’ concerts – whose patriotic, flag-waving finale was due to take place on Saturday.

The Bank of England said it would delay its monthly meeting to set interest rates by one week due to the death.

News that the queen’s health was deteriorating emerged shortly after midday on Thursday when a palace statement said she had been put under medical supervision, prompting her family to rush to Scotland.

The queen had been suffering from what Buckingham Palace had called “episodic mobility problems” since the end of last year, forcing her to withdraw from nearly all her public engagements. Her husband of 73 years, Prince Philip, died in April last year.

Condolences poured in from leaders around the world. From the Sydney Harbour Bridge to the European Commission in Brussels flags were flown at half-mast. Ferdinand Marcos Jr of the Philippines and French President Emmanuel Macron were among those to sign books of condolence.

“To you, she was your queen. To us, she was the queen. To us all she (will) be with us forever,” Macron said in a heartfelt message to the British people.

Elizabeth, who was also the world’s oldest and longest-serving head of state, came to the throne following the death of her father King George VI on Feb. 6, 1952, when she was just 25 and oversaw a seismic change in the social, political and economic structure of her nation.

She won praise for guiding the monarchy into the 21st Century and modernising it in the process, despite intense media scrutiny and the often highly public travails of her family. Charles, who polls indicate is less popular than his mother, now has the task of securing the institution’s future.

“His Majesty, King Charles III, bears an awesome responsibility that he now carries for all of us,” Truss told parliament.

“He has already made a profound contribution through his work on conservation, education, and his tireless diplomacy. We owe him our loyalty and devotion.”

How To Incorporate Literacy Into Your Science Instruction