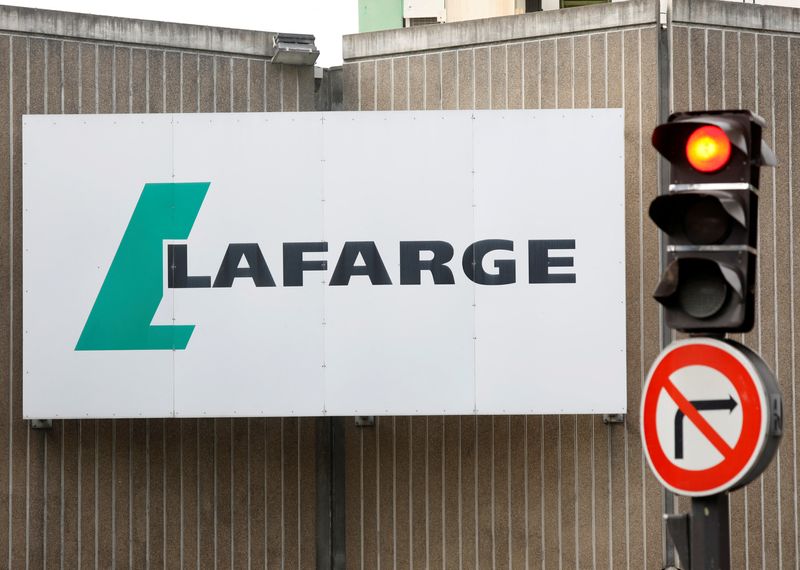 © Reuters. FILE PHOTO: The logo of French concrete maker Lafarge is seen on the plant of Bercy on the banks of the river Seine in Paris, France, September 3, 2020. REUTERS/Charles Platiau

By Luc Cohen and Karen Freifeld

NEW YORK (Reuters) -French cement maker Lafarge pleaded guilty on Tuesday to a U.S. charge that it made payments to groups designated as terrorists by the United States, including Islamic State.

The admission in Brooklyn federal court marked the first time a company has pleaded guilty in the United States to charges of providing material support to a terrorist organization. Lafarge, which became part of Swiss-listed Holcim (SIX:) in 2015, agreed to pay $778 million in forfeiture and fines as part of the plea agreement.

Lafarge is also facing charges of complicity in crimes against humanity in Paris for keeping a factory running in Syria after a conflict broke out in 2011.

Lafarge eventually evacuated the cement plant in September 2014, U.S. prosecutors said. At that point, Islamic State took possession of the remaining cement and sold it for the equivalent of $3.21 million, prosecutors said.

U.S. Deputy Attorney General Lisa Monaco said on Tuesday during a news conference that the company’s actions “reflect corporate crime that has reached a new low and a very dark place.”

“Business with terrorists cannot be business as usual,” Monaco added.

The cement maker previously admitted after an internal investigation that its Syrian subsidiary paid armed groups to help protect staff at the plant. But it had denied charges that it was complicit in crimes against humanity.

Lafarge Chair Magali Anderson said in court on Tuesday that from August 2013 until November 2014 former executives of the company “knowingly and willfully agreed to participate in a conspiracy to make and authorize payments intended for the benefit of various armed groups in Syria.”

“The individuals responsible for this conduct have been separated from the company since at least 2017,” she said.

Monaco said that French authorities have arrested some of the executives involved but did not provide names. Court records refer to six unnamed Lafarge executives.

In a statement, Holcim noted that none of the conduct involved Holcim, “which has never operated in Syria, or any Lafarge operations or employees in the United States, and it is in stark contrast with everything that Holcim stands for.”

Holcim said that former Lafarge executives involved in the conduct concealed it from Holcim, as well as from external auditors.

The SIX Swiss Exchange suspended trading in Holcim shares before the news.

What is Subitizing in Math? Plus, Fun Ways to Teach and Practice It

U.S., Canadian warships sail through Taiwan Strait for 2nd time in a year By Reuters