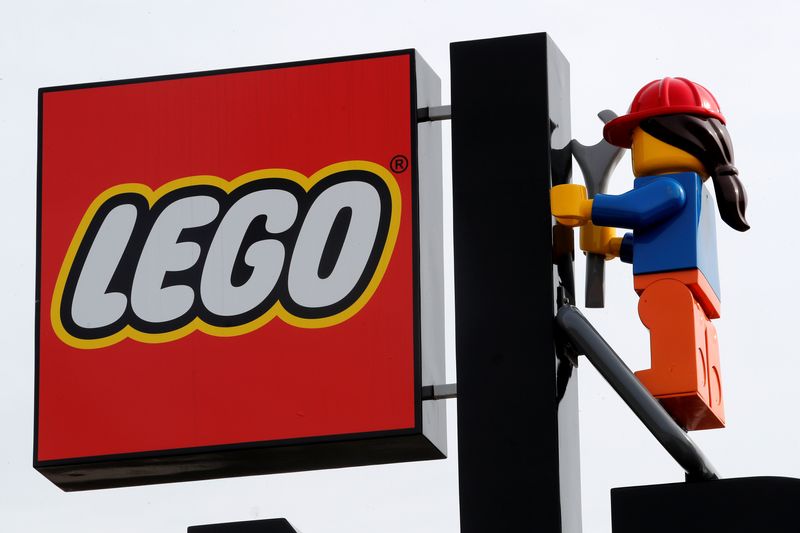 © Reuters. FILE PHOTO: The Lego logo is pictured above the main gate of the new Legoland New York Resort theme park during a press preview of the park, which is currently under construction, with plans to open to the public in the summer of 2021 in Goshen, New York,

COPENHAGEN (Reuters) – Toymaker Lego said on Wednesday it will invest more than $1 billion in its first factory in the United States, which will be carbon-neutral, to shorten supply chains and keep up with growing demand for its coloured plastic bricks in one of its biggest markets.

The factory in Chesterfield County, Virginia, will be the Danish company’s second in North America and seventh worldwide, after it announced a new factory in Vietnam last year.

The investment is in line with a decade-old strategy of placing production close to its key markets, which the company says has been beneficial as the global retail industry faces pandemic-related supply chain issues. The plant will also be carbon neutral.

“Our factories are located close to our biggest markets, which shortens the distance our products have to travel,” Chief Operations Officer Carsten Rasmussen said in a statement.

“This allows us to rapidly respond to changing consumer demand and helps manage our carbon footprint,” he said.

The factory will be powered by renewable energy produced at an onsite solar park, the company said.

Lego has pledged to replace oil-based plastic bricks with ones made from sustainable materials by the end of the decade.

The 160,000-square-meter factory is scheduled to be operational in the second half of 2025 and will employ more than 1,760 people. The U.S. market is currently supplied from a factory in Mexico.

The company now employs around 2,600 people in the United States, where it operates 100 stores.

Supporting Ukraine for the Long War

Match Group Has the Potential for Further Misses into 2023