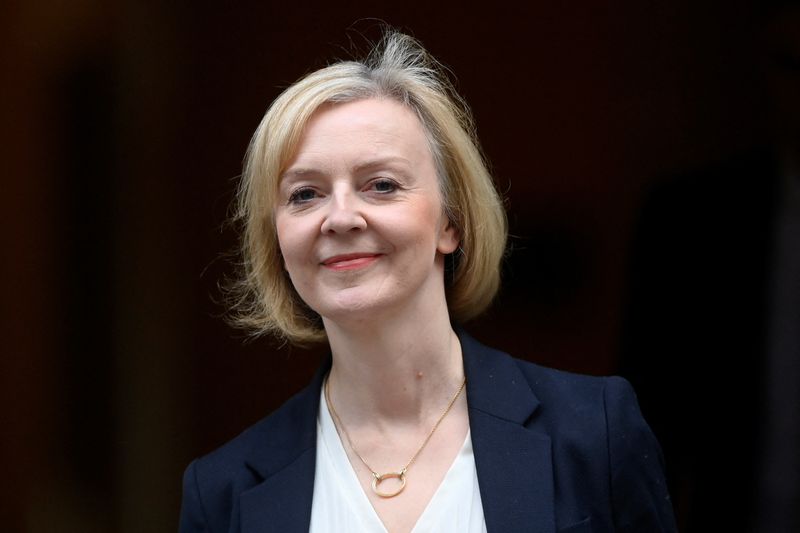 LONDON (Reuters) -Liz Truss said on Thursday she would resign as British prime minister, brought down just six weeks into the job by an economic programme that shattered investor confidence and enraged much of her Conservative Party.

Speaking outside the door of her Number 10 Downing Street office, Truss accepted that she had lost the faith of her party and said she would step down next week, becoming the shortest-serving prime minister in British history.

Truss, who had said on Wednesday she was a “fighter and not a quitter”, told the mass of journalists gathered in Downing Street that she realised she could no longer deliver on the promises that won her the Conservative leadership.

“I have therefore spoken to His Majesty the King to notify him that I am resigning as leader of the Conservative Party,” said Truss, who was supported only by her husband with her aides and loyal ministers noticeably absent.

A new leadership election will be completed by next Friday, Oct. 28. Those expected to run include former finance minister Rishi Sunak and Penny Mordaunt, a former defence minister.

Jeremy Hunt, the man brought in to rescue the public finances, has ruled himself out.

Party members and Conservative lawmakers are expected to be given a say in the vote. A poll earlier this week showed that most members wanted former prime minister Boris Johnson – who was ousted from Downing Street in July – to return.

Britain is not scheduled to hold a national election for another two years.

Betting odds put Sunak as the favourite, ahead of Mordaunt and Johnson.

Appointed on Sept. 6, Truss was forced to sack her finance minister and closest political ally, Kwasi Kwarteng, and abandon almost all her economic programme after their plans for vast unfunded tax cuts crashed the pound and British bonds. Approval ratings for her and the Conservative Party collapsed.

On Wednesday she lost the second of the government’s four most senior ministers, faced laughter as she tried to defend her record to parliament and saw her lawmakers openly quarrel over policy, deepening the sense of chaos at Westminster.

New finance minister Hunt is now racing to find tens of billions of pounds of spending cuts to try to reassure investors and rebuild Britain’s fiscal reputation as the economy heads into recession and inflation runs at a 40-year high.

He is due to deliver a new budget on Oct. 31. The new prime minister will be selected on Friday, Oct. 28.

In a very short speech, Truss – whose brief term as premier beat the record of George Canning, who had held the role for 119 days when he died in 1827 – said she had come into office as the country faced great uncertainty.

“I recognise though, given the situation, I cannot deliver the mandate on which I was elected by the Conservative Party,” Truss said.

Google Messages gets replies and stars on Android, as the RCS fight comes to iPhones

How to use Alexa, Hue, and Nest to set up a spooky smart home this Halloween

Biden comments on coal-fired plants slammed by Manchin ahead of U.S. midterms By Reuters