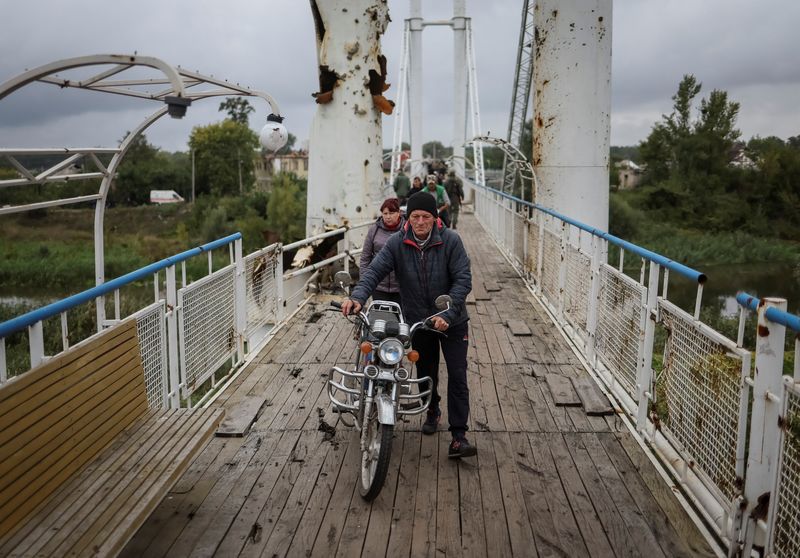 KYIV (Reuters) – Some 87% of Ukrainians oppose any territorial concessions to Russia, according to a poll released on Thursday by a top Ukrainian pollster, an increase on earlier surveys.

The survey conducted by the Kyiv International Institute of Sociology showed an absolute majority of Ukrainians in every region were opposed to their country giving away territory under any circumstances, even if this meant prolonging the war.

The figure marks an increase in the number of people opposed to territorial concessions recorded in previous KIIS surveys, from 84% in July and 82% in May.

The latest survey, which canvassed the views of 2,000 people on Sept. 7-13, coincided with a Ukrainian counter-offensive that has recaptured swathes of land in the northeast Kharkiv region, lifting national morale and raising hopes of further territorial gains before the winter sets in.

Despite the recent gains, however, Russian forces still hold around 20% of Ukrainian territory.

The poll showed that 57% of Ukraine’s ethnic Russians and 85% of Russian-speaking ethnic Ukrainians opposed making territorial concessions to Moscow. Only 24% of ethnic Russians supported giving up land to achieve peace, it showed.

These figures contradict one of Moscow’s stated reasons for launching what it calls its “special military operation” in Ukraine on Feb. 24. Russian President Vladimir Putin said the action was needed in part to protect Russian speakers threatened by what he said were dangerous nationalists in Ukraine.

Kyiv and its allies reject this claim, arguing instead that Russia is waging a baseless war of conquest.

Anyone can use this AI art generator — that’s the risk

Russia says it shot down Ukrainian drone near bomber air base, three killed By Reuters