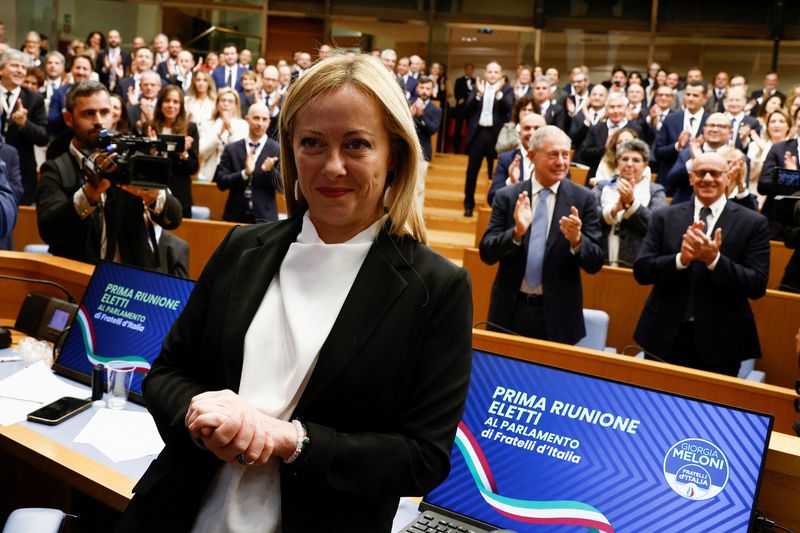 By Angelo Amante and Crispian Balmer

ROME (Reuters) -Giorgia Meloni, who is expected to be Italy’s next prime minister, threw down the gauntlet to her right-wing coalition partners on Wednesday, saying her new government would be pro-NATO and fully a part of Europe.

In a sharply worded declaration, Meloni said any party that disagreed with her foreign policy line should not join the government, which is set to take office next week.

“Italy with us in government will never be the weak link in the West,” she said.

Meloni has staunchly defended Ukraine since Russia launched its invasion in February, and has supported Western sanctions against Moscow.

“On one thing I have been, am, and will always be clear. I intend to lead a government with a clear and unequivocal foreign policy line,” she said. “Anyone who does not agree with this cornerstone cannot be part of the government.”

Berlusconi, 86, is a long-time friend of Putin and in a first leaked audio file released on Tuesday, he revealed to parliamentarians from his Forza Italia party that he was back in touch with the Russian president and had exchanged “sweet letters” and gifts.

In a second file, released by news agency LaPresse on Wednesday, Berlusconi said Ukraine had sunk a 2014 peace deal that was designed to end a separatist war by Russian speakers in the eastern Ukraine regions of Donetsk and Luhansk.

Repeating accusations made by Putin that have been denied by Ukraine, Berlusconi said Zelenskiy made the situation much worse when he came to power in 2019.

Berlusconi also repeated an assertion that Putin had bowed to internal pressure and only invaded Ukraine to set up a new government “of decent people with common sense”.

On Tuesday, after the first recording was released, Forza Italia said Berlusconi’s view of the war was “in line with the position of Europe and the United States.”

However, opponents have leapt on the twin recordings to accuse Berlusconi of undermining Meloni’s credibility.

“Berlusconi’s comments are very grave and incompatible with Italian and European positions,” said Enrico Letta, the leader of the centre-left Democratic Party.

Marvel Snap is 5D chess in six minutes or less