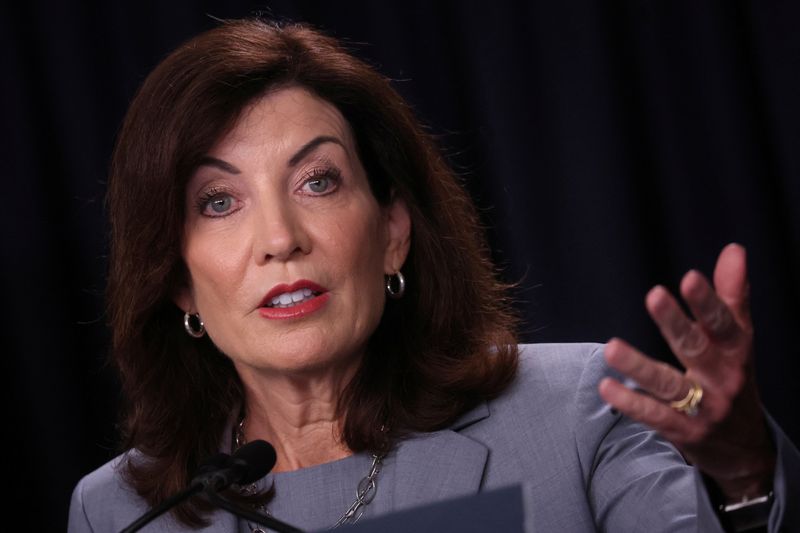 NEW YORK (Reuters) -New York Governor Kathy Hochul declared a disaster emergency on Friday in a bid to accelerate efforts to vaccinate residents against polio after the virus was detected in wastewater samples taken in four counties.

Hochul’s executive order followed the discovery of the virus last month in samples from Long Island’s Nassau County, bordering the New York City borough of Queens. Earlier this year the virus was found in samples from Rockland, Orange and Sullivan counties, all north of the city.

In July, the first confirmed case of polio in the United States in nearly a decade turned up in an adult in Rockland County, according to the state health department.

“On polio, we simply cannot roll the dice,” State Health Commissioner Mary Bassett said in a statement. “If you or your child are unvaccinated or not up to date with vaccinations, the risk of paralytic disease is real.”

Polio can cause irreversible paralysis in some cases, but it can be prevented by a vaccine first made available in 1955. While there is no known cure, three injections of the vaccine provide nearly 100% immunity.

People of all ages are under threat, though the virus primarily affects children aged three and younger.

Officials urged unvaccinated adults and minors as young as two months old to get inoculated against the virus, and advised that vaccinated people receive a lifetime booster dose.

Hochul’s declaration authorizes paramedics, midwives and pharmacists to administer polio vaccinations, among other steps, to accelerate inoculation rates. The order also directs health-care providers to update the state with data on immunizations.

The state of emergency will stay in effect until Oct. 9. Health official set a goal of getting 90% of residents vaccinated.

Orange County has the lowest vaccination rate of the counties of concern with less than 59% being immunized, according to the state health department.

How To Incorporate Literacy Into Your Science Instruction