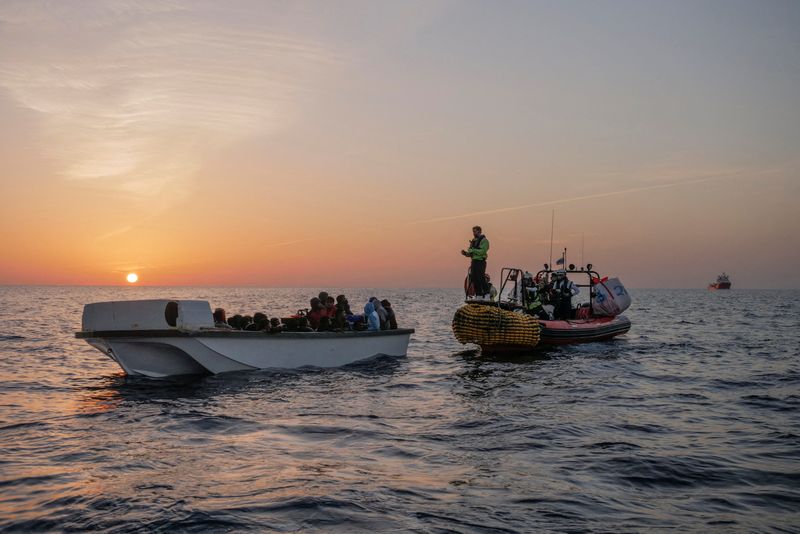 By Angelo Amante and Alvise Armellini

ROME (Reuters) – Norway has no responsibility for people aboard charity boats flying its national flag, its ambassador to Rome said on Friday, after Italy urged Oslo and Berlin to take charge of almost 1,000 migrants stranded in the Mediterranean.

Three charity vessels, including the Norwegian flag-bearing Ocean Viking and Geo Barents, have been at sea off Italy for more than a week waiting for permission from the new rightist government in Rome to dock. All their requests have so far been rejected, they say.

“Norway has no responsibility under human rights conventions or the law of the sea for persons taken on board private Norwegian-flagged vessels in the Mediterranean,” Ambassador Johan Vibe said in an email statement to Reuters.

The response came after Italy sent letters last week to the embassies of Germany and Norway, saying non-governmental organisation (NGO) ships flying their flags were not following European security rules and were undermining the fight against illegal immigration.

The German embassy on Wednesday urged Italy to provide help swiftly, saying the NGO ships made an important contribution to saving lives at sea.

In its response, Norway said “the primary responsibility for coordinating the work to ensure a safe port for those in distress at sea lies with the state responsible for the search and rescue area where such assistance has been rendered”.

“Neighbouring coastal states also have a responsibility in such matters,” the ambassador’s statement added.

The two Norwegian-flagged vessels have more than 800 people onboard and are sailing off Sicily, while the German-flagged Humanity 1 has 179 people, including more than 100 unaccompanied minors and a seven-month-old baby with her mother.

Petra Krischok, a press officer at the German NGO who is aboard the vessel, said the migrants were sleeping on the deck and could soon face rough seas after days of good weather.

More than a quarter of the group had been sick with flu-like symptoms, she said in emailed comments.

On Thursday, charity SOS Mediterranee which operates the Ocean Viking said it had asked Greece, Spain and France to help as Italy and Malta had not responded to its docking requests.

French Interior Minister Gerald Darmanin told RMC-BFMTV that international law said Italy should take in the migrants, but added that Paris and Berlin were ready to offer assistance.

“We have told our Italian friends, together with our German friends, that we are ready to take in, clearly as we have done in previous cases, some of the women and children so that Italy is not alone in receiving them,” he said.

Migrant numbers have surged in Italy over the last week, with more than 6,200 people arriving since Oct. 27 compared to 1,400 in the same period in 2021, government data shows.

What to know about COP27, the UN climate conference

Factbox-Voters in five U.S. states to decide on legalizing marijuana in November midterms By Reuters