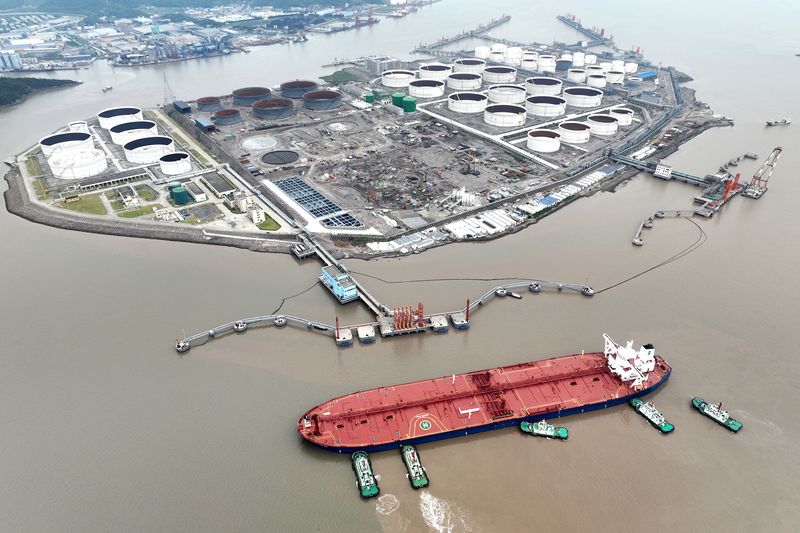 NEW YORK (Reuters) -Oil prices rose on Friday on expectations that OPEC+ will discuss output cuts at a meeting on Sept. 5, though concern over China’s COVID-19 curbs and weakness in the global economy loomed over the market.

Both benchmarks slid 3% to two-week lows in the previous session. Brent posted a weekly drop of 7.9%, and WTI of 6.7%.

A weekly chart shows that futures surpassed last week’s high and have since retreated, and closed below last week’s closing level. That is a bearish signal, according to Eli Tesfaye, senior market strategist at RJO Futures in Chicago.

“When you take out the week’s high and week’s low and then close lower, that’s a reversal down – it’s a signal that there’s weakness, and that’s telling you it’s a weak market,” he said.

The Organization of the Petroleum Exporting Countries and allies led by Russia – a group known as OPEC+ – are due to meet on Sept. 5 against a backdrop of expected demand declines, though top producer Saudi Arabia says supply remains tight.

OPEC+ is likely to keep oil output quotas unchanged for October at Monday’s meeting, three OPEC+ sources said, although some sources would not rule out a production cut to bolster prices that have slid from sky-high levels hit earlier this year.

OPEC+ this week revised market balances for this year and now sees demand lagging supply by 400,000 barrels per day (bpd), against 900,000 bpd forecast previously. The producer group expects a market deficit of 300,000 bpd in its base case for 2023.

The news made some investors skeptical that a deal was imminent, which supported oil prices, said Phil Flynn, an analyst at Price Futures group in Chicago.

“There’s less confidence that we’re going to get a deal with Iran and that’s leading to some short-covering,” Flynn said.

G7 finance ministers agreed on Friday to impose a price cap on Russian oil, but provided few new details to the plan aimed at curbing revenue for Moscow’s war in Ukraine while keeping crude flowing to avoid price spikes.

In the United States, employers hired more workers than expected in August, but moderate wage growth and a rise in the unemployment rate to 3.7% could ease pressure on the Federal Reserve to deliver a third 75 basis-point interest rate hike this month.

U.S. energy firms this week cut the number of oil and rigs operating for the fourth time in five weeks. The U.S. oil and gas rig count, an early indicator of future output, fell by 5 to 760 in the week to Sept. 2, Baker Hughes Co said on Friday.

Russia’s Gazprom (MCX:) said on Friday that natural gas supplies via the Nord Stream 1 pipeline would remain shut off after the main gas turbine at Portovaya compressor station near St Petersburg was found to have an oil leak.

Investors remain worried about the impact of the latest COVID-19 restrictions in China. The city of Chengdu on Thursday ordered a lockdown that has hit manufacturers such as Volvo.

Data showed Chinese factory activity in August contracted for the first time in three months in the face of weakening demand, while power shortages and COVID-19 outbreaks also disrupted output.

Best Dinosaur Videos for Kids To Share in the Classroom

I’m Punished for Being Good at Teaching!

Hurricane Ian rips into Cuba, with Florida in its sights By Reuters