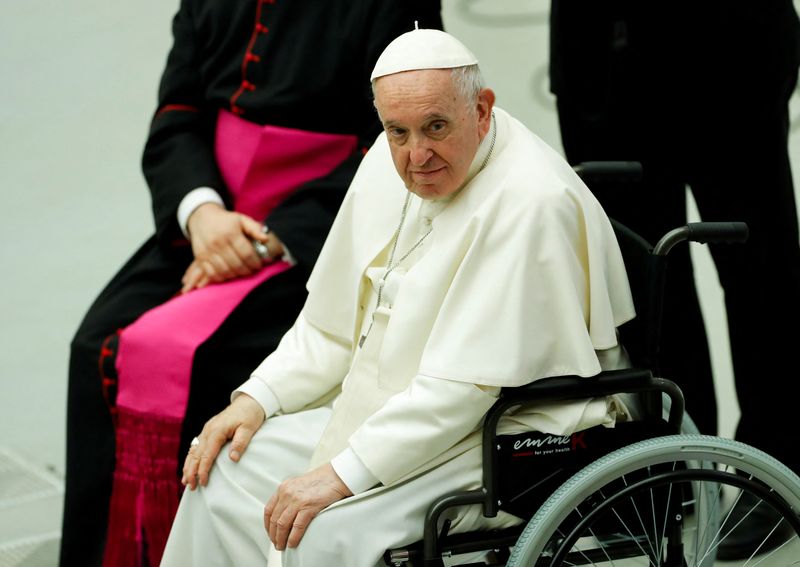 VATICAN CITY (Reuters) – Pope Francis apologised to the people of Democratic Republic of Congo and South Sudan on Sunday for having to cancel his visit because of walking problems, and said he was hopeful his condition would improve.

The Vatican announced on Thursday that the July 2-7 trip had been postponed indefinitely because of the 85-year-old pontiff’s knee ailment, which has forced him to use a wheelchair for more than a month.

“I feel great regret that I had to postpone this trip, which I am still very keen to make,” he said at his Sunday address before thousands of people in St. Peter’s Square.

“I ask you to pardon me for this. Let us pray together that with the help of God and with medical treatment, I can come to you as soon as possible. We are hopeful,” he said, directly addressing the people and authorities of both countries.

The Vatican said on Thursday that the trip was postponed “in order not to jeopardize the results of the therapy that he is undergoing for his knee”.

On Sunday, he referred to his ailment, which is believed to be a torn ligament, as “problems with my leg”. Francis also suffers from sciatica, which caused him to limp even before the flare-up of the knee problem.

Vatican sources have said the pope has been receiving several injections a week for the ailment, as well as physical therapy, and that he had hoped to be able to regain at least a partial ability to walk before the trip was due to start.

They have said the pope is against surgery because of problems with general anaesthesia following an operation to remove part of his intestine a year ago.

The pope is still scheduled to visit Canada from July 24-30.

He also urged his listeners not to become accustomed to the war in Ukraine. “Let us not allow the passing of time to dull our pain and our concern for those martyred people,” he said

Ether holds its breath for the lean, mean ‘merge’ By Reuters