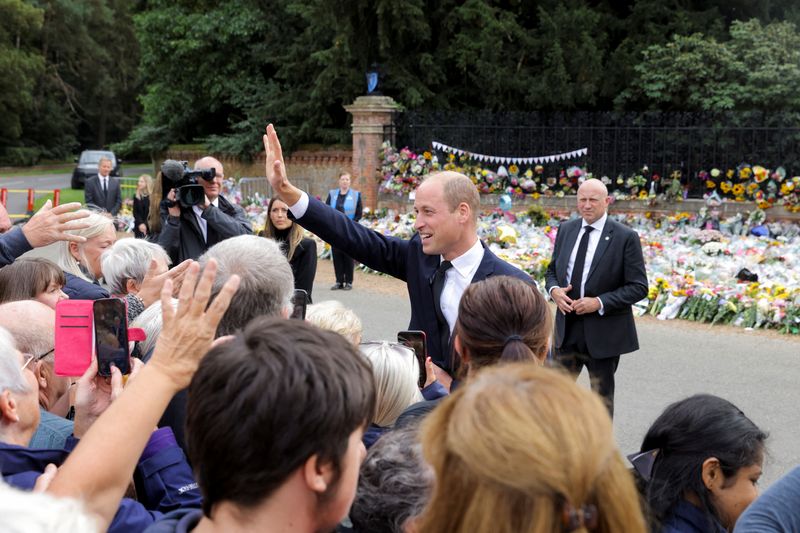 LONDON (Reuters) – Prince William has told well-wishers that walking behind his grandmother’s coffin had been challenging and had brought back memories, alluding to the day 25 years earlier when, as a boy, he followed his mother’s casket on the way to her funeral.

William, the heir to the throne, walked behind his father King Charles and side by side with his younger brother Prince Harry during Wednesday’s solemn procession taking the late Queen Elizabeth from Buckingham Palace to Westminster Hall.

“The walk yesterday was challenging,” William told members of the public who were sympathising with him over his loss while he viewed flowers laid outside the royal Sandringham Estate in eastern England to honour the queen.

“Brought back a few memories,” he could be heard saying in video footage of the exchange on Thursday.

William and Harry, then aged 15 and 12, followed their mother Princess Diana’s coffin through central London in the glare of the world’s media after she was killed in a car crash in Paris aged 36 in 1997, a defining image of their lives.

The brothers, whose relationship has become strained in recent years, have spoken in the past of the lasting trauma they endured after their mother’s death and that walk, during which they maintained a stoical facade despite their grief.

While the circumstances were different this time, the queen having died peacefully aged 96 at her Scottish home, there were similarities – the emotion, the solemn pageantry, and the sense of a momentous event unfolding in front of crowds and cameras.

Brazil raises about $6 billion in Eletrobras shares in world’s No.2 offering of the year By Reuters