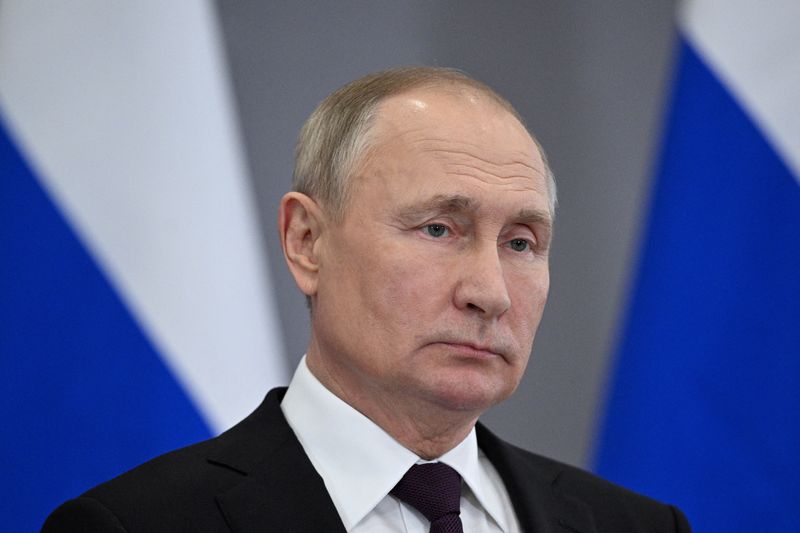 LONDON (Reuters) – Russian President Vladimir Putin said on Wednesday he was introducing martial law in four Russian-occupied regions of Ukraine that Moscow last month claimed as its own territory but is struggling to defend from Ukrainian advances.

In televised remarks to members of his Security Council, Putin also instructed the government to set up a special coordinating council under Prime Minister Mikhail Mishustin to work with Russia’s regions to boost Moscow’s war effort.

The package of moves, nearly eight months into the war, marked the latest escalation by Putin to counter a series of major defeats at the hands of Ukrainian forces since the start of September.

By extending to regions beyond Ukraine, they ensured that more of Russia’s population, already chastened by a partial mobilisation announced last month, would feel the consequences of the war in their own lives.

The published Kremlin decree ordered an “economic mobilisation” in eight regions adjoining Ukraine, including Crimea, which Russia invaded and annexed in 2014, and said movement in and out of the regions would be restricted.

Putin said he was conferring additional powers on the leaders of all Russia’s 80-plus regions to protect critical facilities, maintain public order and increase production in support of Moscow’s “special military operation”.

The measures came on the same day that Russian-installed officials in Kherson, one of the four occupied regions, told civilians to leave some areas as soon as possible in anticipation of an imminent Ukrainian attack.

Putin said the steps he was ordering would increase the stability of the economy and industry and boost production in support of the military effort.

“We are working on solving very complex, large-scale tasks to ensure a reliable future for Russia, the future of our people,” he said.

Russia, mired in war, faces economic pain and attempts to isolate it By Reuters

Waze gets built-in car app for the...