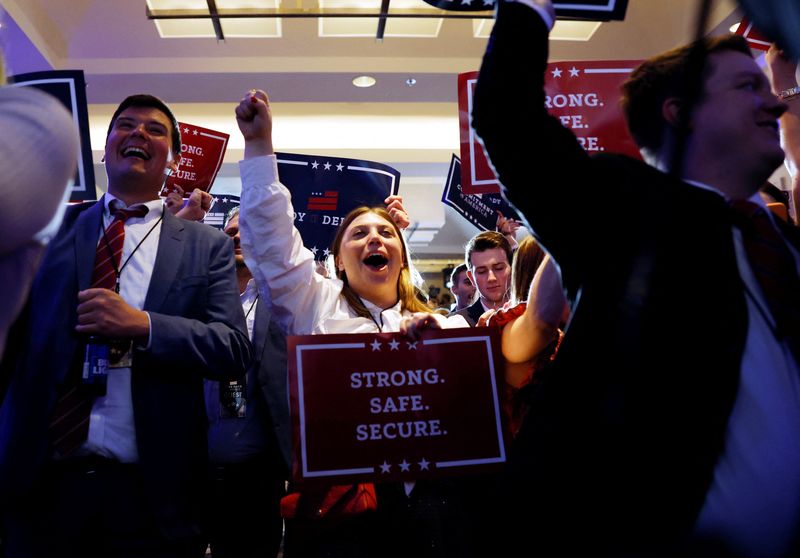 By Tim Reid and Nathan Layne

PHOENIX, Ariz. (Reuters) -Republicans made modest gains in U.S. midterm elections but Democrats did better than expected, leaving control of Congress and the future of President Joe Biden’s agenda unclear on Wednesday morning.

Many of the most competitive races were too close to call and Republicans acknowledged that the election was not producing the sweeping “red wave” victory they had sought.

The results appeared to show voters punishing Biden for presiding over an economy hit by steep inflation, while also lashing out against Republican moves to ban abortion.

And poor performances by some candidates allied to Donald Trump indicated exhaustion with the kind of electoral and governing chaos fomented by the former Republican president.

In the House of Representatives, Republicans were favored to win a narrow majority that would allow them to block Biden’s legislative priorities and launch investigations into his administration and family.

By early Wednesday, Republicans had flipped a net six Democratic House seats, Edison Research projected, one more than the minimum they need to take over the chamber.

But Democrats were doing much better than many had expected.

The mood at the White House improved as the night wore on, with once-nervous aides celebrating Fetterman’s victory and saying they still hoped to hold the Senate.

Biden posted a photo of himself on Twitter happily congratulating some of the Democratic winners by phone.

Control of the Senate depended on tight races in Arizona, Georgia and Nevada, where ballots were still being counted.

The Georgia race appeared to be headed for a runoff vote on Dec. 6 because both the Democratic and Republican candidates were falling short of the 50 percent needed for victory.

If the Republicans do take control of Congress, they will have the power to cripple Biden’s agenda and could also block aid to Ukraine, although analysts say they are more likely to slow or pare back the flow of defense and economic assistance.

With a House majority, Republicans would try to use the federal debt ceiling as leverage to demand deep spending cuts. They would also seek to make Trump’s 2017 individual tax cuts permanent and protect corporate tax cuts.

House Republican Leader Kevin McCarthy had hoped to celebrate a resounding victory that would propel him into the top job of speaker.

Instead, he had to settle for a promise to his supporters: “When you wake up tomorrow, we will be in the majority and (Democratic Speaker) Nancy Pelosi will be in the minority,” he said on Tuesday night.

Only 13 of the 53 most competitive races, based on a Reuters analysis of the leading nonpartisan forecasters, had been decided, raising the prospect that the final outcome may not be known for some time.

U.S. stock index futures ticked lower on Wednesday as investors kept a close eye on the results in expectation of a divided Congress that would make it harder for the passage of drastic policy changes.

“Having a balanced ticket in terms of Republicans, if they get the House and Senate, or just the House, will help slow some of the government spending which many have seen as one of the major contributors to inflation,” said JJ Kinahan CEO, of IG North America in Chicago.

The party that occupies the White House almost always loses seats in elections midway through a president’s first four-year term, and Biden has struggled with low public approval.

But Republican hopes for a “red wave” of victories faded as Democrats showed surprising resilience in several key races. Democrats were projected as the winners in 11 of the 13 close contests that had been decided.

“Definitely not a Republican wave, that’s for darn sure,” Republican U.S. Senator Lindsey Graham told NBC in an interview.

Trump, who took an active role in recruiting Republican candidates for Congress and is strongly hinting at a third run for the presidency in 2024, had mixed results.

He notched a victory in Ohio, where author J.D. Vance won a Senate seat to keep it in Republican hands. But television host and heart surgeon Mehmet Oz failed to win his Pennsylvania Senate race, and Doug Mastriano, another Trump ally, was handily defeated in the Pennsylvania governor’s race.

Trump allies also were struggling in Arizona, Georgia and Nevada Senate races, where ballots were still being counted.

The Senate was still a toss-up, with the pivotal battles in Arizona, Georgia and Nevada still in play. The Georgia Senate race could end up in a runoff, possibly with Senate control at stake.

Thirty-five Senate seats, all 435 House seats and three dozen governors’ races were on the ballot.

More than 46 million Americans voted ahead of Election Day, either by mail or in person and state election officials caution that counting those ballots will take time.

(Live election results from around the country are here.)

In a possibly embarrassing defeat for House Democrats, Representative Sean Maloney narrowly trailed a Republican challenger in his bid for a sixth term.

Maloney chairs the Democratic campaign committee charged with electing more Democrats to the House. His was one of a couple of races in New York state where Republicans were performing better than expected.

Local officials reported isolated problems across the country, including a paper shortage in a Pennsylvania county. In Maricopa County, Arizona – a key battleground – a judge rejected a Republican request to extend voting hours after some tabulation machines malfunctioned.

The problems stoked evidence-free claims among Trump and his supporters that the failures were deliberate.

Scores of Republican candidates have echoed Trump’s false claims that his 2020 loss to Biden was due to widespread fraud, raising fears among Democrats that they could interfere with the 2024 presidential race.

The primary issue weighing on Democrats was stubbornly high annual inflation, which at 8.2% stands at the highest rate in 40 years.

Voters in California, Michigan and Vermont approved referendums enshrining abortion rights in their state constitutions. Deeply conservative Kentucky looked poised to reject a constitutional amendment that would have declared there was no right to abortion.