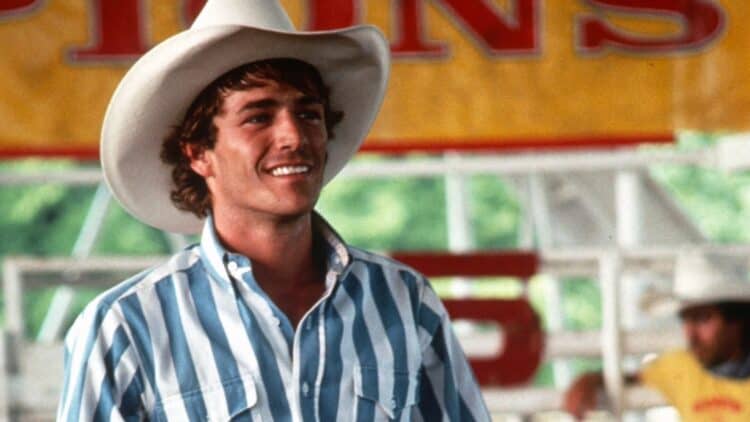 8 Seconds is a Western drama film released in 1994. The title “8 Seconds” is the amount of time a bull rider needs to complete to get a score. The storyline revolves around a bull rider, Lane Frost, who learns the ropes of bull riding at a young age through his father, Clyde. He ends up being the youngest national champion in rodeo history. This movie’s soundtrack album comprises 12 songs from various artists, including Bill Conti, McBride, Morris Chesnutt, John Anderson, and many more. We’ll be ranking all of them, from the worst to the best.

“Pull Your Hat Down Tight” is among the songs featuring on 8 Seconds album soundtracks. Pamela Yvonne Tillis, whose stage name is Pam Tillis, released the album the same year.

“Once in a While” is a song by Billy Dean released in 1994, from the 8 Seconds album soundtrack. It describes meeting someone you share your vibes with once in a while. Dean emphasizes the song title to describe how he misses a special loved one once in a while.

“Lane’s Theme” is an instrumental song composed and conducted by Bill Conti. The American composer has been nominated three times for Academy Awards. He won the Best Original Score category and three Golden Globe nominations in the Best Original Song category. In 2008, he got inducted into the Louisiana Music Hall of Fame at the Louisiana State University. According to Wikipedia, Conti released “Lane’s Theme” for 8 Seconds album in 1994, helping its peak at three on the Billboard Top Country Albums chart.

When someone says, “you hung to the moon,” they hold you in high regard and think of you as a wonderful person. Patty Smyth used the idiomatic expression to release a song bearing the same title. She opens the first verse by saying, “someone keeps calling, you pick it up, and you’re talking really low/I watch the rain falling/ just like I’m watching you go/ Why you have to sound so happy, baby?” The message is to let your lover know how much they mean to you.

“Texas is Bigger Than It Used to Be” is a song by American country music Mark Chesnutt, released in 1993. It was during this year that most of his albums received successful results. The singer is known for his neotraditional country influences, with some critics comparing him to George Jones. As a Beaumont native, his style of music has helped him endear himself to country music lovers. He released this song for 8 Seconds the following year after its release.

We’ve all gone through “I wish I knew moments,” making it imperative to learn from our mistakes. One of those songs supporting this school of thought is “If I Had Known” by Reba McEntire. She recorded and performed it in 1991 but released it for the movie two years later. The singer regrets the moments she treated an unknown character better. It’s a piece of excellent country music that made her famous in the 1990s and to date.

“When Will I Be Loved” is a song released specifically for the 8 Seconds movie in 1994. Vince Gill and Karla Bonoff sang it the same year, while Phil Everly wrote it. The first recording was on February 18, 1960, by the Everest Brothers. Even so, the end of the film drew mixed reactions. However, the film critic argues that this distracts viewers and only makes us feel sympathy for the characters. This song also has a regretful message, making viewers sympathize with the actors.

According to Chicago Times’ film critic, Roger Ebert, Lane Frost always had a growing need to be famous more than his father, despite the latter holding his hand to become the youngest national champion in rodeo history. The song “Just Once,” released in 1994, shares certain beliefs about a man’s thoughts. David Lee Murphy opens the song by saying, “A man can’t look at a woman too long.” It’s unclear what he meant by that, but it does make sense about men who like ogling women.

“Standing Right Next to Me” is a song by Karla Bonoff released for the 8 Seconds album in 1994. The singer is known for the songs she wrote for others. She also plays the piano and guitar, making this song one of her best performances. The lyrical interpretation is still unknown, but you can guess it’s about someone standing close to her. She feels emotionally attached to this person and can’t think of anyone else besides him.

“Ride ’em High, Ride ’em Low” is a song by Brooks & Dunn, released in 1994. The two artists released it for the 8 Seconds album the same year. Though the duo split up in the 1990s, they reunited to perform together for the first time in 2010. Reba McEntire also joined them while they performed at the Colosseum in Vegas for the opening night of a residency.

“Burnin’ Up the Road” is a song by John Anderson, released in 1994. Unfortunately, he died of a heart attack in 1992 at 69 years old. He was also an actor by then who appeared on Broadway and television. Before his demise, he planned for the New York production of “In the Sweet, By and By.”

Have you ever been in a relationship that makes you doubt your sanity? Crying now and again is the order of the day, so you don’t remember the last time you felt happy. While some people won’t mind enduring emotional distress, too much crying doesn’t make you any better. “No More Cryin” is one such song describing a man tired of crying for an ungrateful woman.