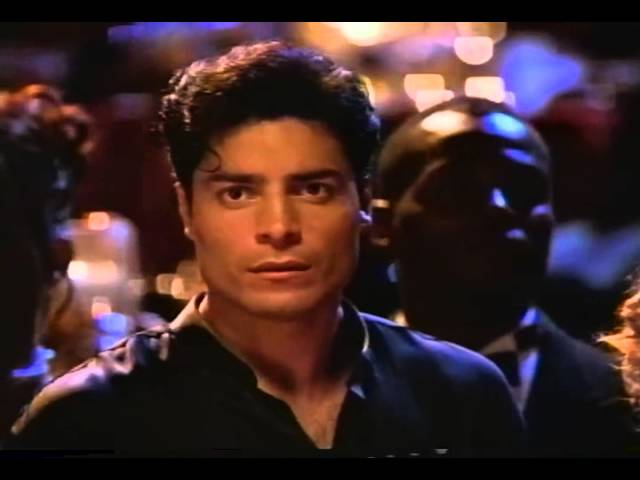 The 1998 romantic dance drama, Dance with Me starred Puerto Rican actor Chayanne as Rafael Infante, a grieving son who just buried his mother in Cuba and sought to start a new life in Houston, Texas, starting off as a handyman for John Burnett (played by Kris Kristofferson), who happens to own a dance studio. As it turns out, Burnett was the father of Rafael he didn’t know existed until it was revealed later in the movie. In the meantime, Rafael met a dancer named Ruby Sinclair (played by Vanessa Williams), and the chemistry between the two flourishes as they prepare for an upcoming dance competition in Las Vegas, Nevada. As a movie, Dance With Me was met with mixed reviews. As a soundtrack, it did very well, especially among the Latino audience, thanks to the hit single (Refugio de Amor). There are fifteen tracks on the soundtrack in total, starting with (Magalenha) and ending with (Suavemente). Sung in English and Spanish, the songs featured witnessed performances by both actors, as well as Gloria Estefan, Jon Secada, and Georgio Mendes.

Dark Latin Groove, or DLG for short, is the salsa band behind the dance-favorite song, (Atrevete (No Puedes Conmigo), which was featured on their 1997 album, Swing On. For Dance With Me, it earned its place as an energetic number, as well as on a vibrant soundtrack that literally went from one awesome song to another as a well-organized, easy-to-love layout.

Monica Naranjo’s (Pantera en Libertad) beautifully illustrated just how beautiful this woman’s powerful singing voice really is. In 1997, this single became a number seven hit in Spain as one of four hit singles from her album, Palabra De Mujer. This speedy piano number matched perfectly with Naranjo’s vocals, as well as with Dance With Me’s movie and soundtrack.

(Jazz Machine) was performed exactly as an energetic jazzy number should be, thanks to the stellar performance by Black Machine. This self-promoting number also served as a throwback to the Roaring Twenties, which makes this one of those rare musical gems worth listening to as a genuine kicker with swing.

Performed by Albita Rodriguez, (Fiesta Pa’Los Rumberos) was a catchy dance number that still serves as ideal party music, which was the idea behind this song to begin with. In English, “fiesta” means “party” while Pa’Los Rumberos was the name of the place this festive number was about.

On the soundtrack, (Jibaro) is a Dance With Me ’98 remix that was composed and performed by the electronic music group, Electra. As a dance number, this song does exactly what it has been designed to do as an energetic number that also makes good material for a Latino-style aerobic workout.

(Echa Pa’ Lante (Spanish Cha-Cha Mix)) was a performance by Thalia, originally recorded as a promotional single for her album, Amore a la Mexicana, which was released in 1997. Highly energetic, this fun number is guaranteed to bring out the salsa dancer that’s lurking underneath the surface somewhere.

Ruben Blades is a Panamanian musical icon that has contributed heavily to both the jazz and salsa music scene ever since he began to perform in 1974. This Latino legend has won a multitude of music awards that date as far back as 1987 and even as recently as 2022, making him one of the most successful recording artists of all time, regardless of nationality. It stands to reason that (Patria) would be no slouch as it served an instrumental role as one of Dance With Me’s best songs in the movie and on the soundtrack, as well as serving an instrumental role in his 1988 album, Antecedente, earning the 1989 Grammy Award win for Best Tropical Latin Performance.

8. Want You, Miss You, Love You (performed by Jon Secada)

Jon Secada, as a recording artist, has a vocal talent that is truly amazing. Although (Want You, Miss You, Love You) may not have registered as a chart-hitting phenom on any official music charts, this romantic number is nothing short of amazing. This remarkable ballad is one of the tracks featured on the 1997 album, Secada.

7. You Are My Home (performed by Chayanne and Vanessa Williams)

(You Are My Home) is the English version to (Refugio de Amor). Both of these songs were performed by Chayanne and Vanessa Williams for the movie, Dance With Me, which was released in 1998. Unlike the Spanish version, this one did not make an official chart appearance but has become a fan-favorite among the English-speaking audience that prefers it over the Spanish version. Smoky and romantic, this fabulous duet is the perfect slow dance for a couple to sizzle up the dance floor, whether it be at a club or at home.

The 1996 hit, (Tres Deseos (Three Wishes)) was recorded and released by Gloria Estefan in 1996 from her second Spanish-speaking album, Abriendo Puertas. This upbeat Latino dance song topped the US Billboard Hot Dance Club Chart and peaked as high as number twelve on the US Billboard Top Latin Songs chart. Since its release, it has remained a salsa dance song favorite and is often performed in competitions, perhaps inspired by the footage shared in the movie, Dance With Me. The version in the movie and the soundtrack was a remix 12″ remix.

As a samba, (Magalenha) remains a big favorite among dancers, and rightfully so. Festive and electric, this masterpiece performed by Georgia Mendes is nothing short of fantastic. It suited both the movie and the soundtrack very well. This song originally came from his album, Brasileiro, which was released in 1992.

4. Heaven’s What I Feel (performed by Gloria Estefan)

(Eres Todo en Mí (You’re My Everything)) was a song performed by the Mexican legendary singer-songwriter, Ana Gabriel. This incredible love song is nothing short of beautiful, regardless if it is heard in Spanish or English. The passion of this song was highlighted beautifully in the movie, as well as on the Dance With Me soundtrack.

(Refugio de Amor) was the song that promoted both the movie, Dance With Me and its soundtrack in 1998. On the US Billboard Latin Pop Songs chart, it became a number four hit. It was also instrumental in the soundtrack becoming a number one seller on the US Billboard Top Latin Albums chart for six straight weeks.

(Suavamente), which is Spanish for “smoothly,” was a song recorded by Elvis Crespo for his debut album, also titled Suavemente. It became a number one hit in 1998 on the US Billboard Hot Latin Tracks chart and it was a number eighty-four hit on the US Billboard Hot 100. Since its original release, it has been covered many times over by a variety of artists. Sung in Spanglish, it was also awarded 1998’s Tropical Song of the Year by Premios Lo Nuestro. The cultural impact of Suavamente, as an album and a single, has been credited for its revolutionary approach in the popular subgenre of Latin music known as merengue. Crespo earned himself international fame not simply as a fan favorite in the merengue music market but also in pop music.

Binance to Hand Out 45,000 SHIB Via E-Learning Program By DailyCoin

Sanctions and Satellites: The Space Industry After the Russo-Ukrainian War