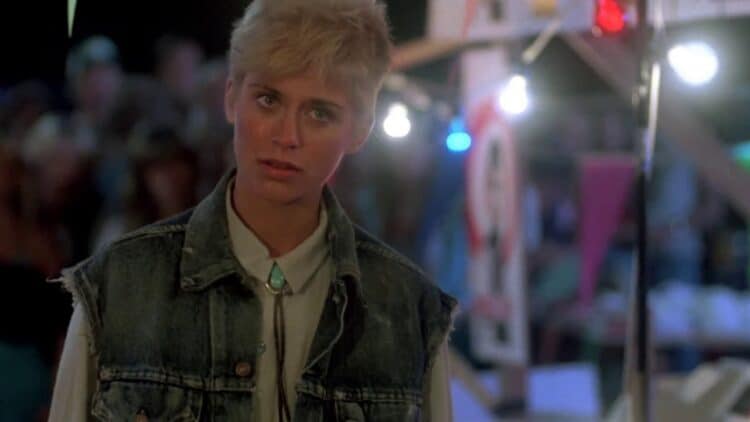 Despite receiving negative reviews upon its release, The Legend of Billie Jean has gained a cult following over the years. The drama film was released in 1985 and featured the likes of Helen Slater and Christian Slater, who rock their roles to perfection. The Legend of Billie Jean has a great storyline for a 1985 movie with a classic theme of the underdog fighting back.

Helen Slater, who stars in the movie as Billie Jean Davy, encounters a rowdy local lad with his friends while hanging out with her little brother Binx. Binx then humiliates the lad who goes by the name Hubie by throwing a milkshake on his face. Hubie then retaliates by stealing Binx’s scooter. Despite the authorities being aware of the incident, they fail to take any action; hence Billie Jean takes it up with Huie’s father, Mr. Hyatt.

In the process, Mr. Hyatt coerces Billy Jean with a promise of monetary compensation and, in the process, ends up attempting to rape her. Luckily, Binx and his friends show up just in time to help Billie Jean, but in the altercation, Mr. Hyatt gets shot in the shoulder.

The incident resulted in the group of four friends going on the run, fearing arrest after the media covered the story. The group of friends becomes folk heroes in the area, with Billie Jean revamping her dressing style to one inspired by Joan of Arc from the 195 films Saint Joan. In this article, we try to rank all the songs in the entire movie soundtrack. Read on and find out which song came out on top.

“Rebell Yell” is the first song on Billy Idol’s 1983 album that goes by the same name. “Rebell Yell” is a rock song that heavily borrows from new wave music. The song’s title was inspired by a brand of bourbon whiskey, which amazed Billy Idol after he had found Mick Jagger and Keith Richards drinking it. The track was written by billy Idol and Steve Stevens, who doubled up as Billy Idol’s guitarist. The track’s guitar tunes stand out, and you can tell how talented Steve Stevens was with his combination of electric guitar and electronic keyboard. Despite the song charting outside the Top 40 in the UK, it was voted #79 on VH1’s ranking of best hard rock songs of all time.

The Legend of Billie Jean soundtrack was had some great soundtracks, but this song spoke to me personally, and we are grateful that Chas Sanford gave us this incredible track. Chas Sanford has played alongside some greats such as Tina Turner and there is no disputing his talent. This song opens with a fast beat, later accompanied by some great guitaring. Chas Sanford’s voice is magical throughout the whole truck, which brings out the movie’s theme quite well.

Although Mark Safan is not as popular in the music circles as his brother, one of his most significant accomplishments will go down as his contribution of this song to the Legend of Billie jean soundtrack. The song plays in a scene in the movie after Billy Jean and his younger brother shoot Mr. Hyatt. The song plays while the duo is in the car before word spreads in the local media that they have shot Mr. Hyatt. Although the song was never fully released, you can tell that it is pretty catchy and sets up the movie scene perfectly.

“It’s My Life” was initially written by Paul Stanley and Gene Simmons and is contained in Kiss’s 1982 album, Creatures of the Night. Although the two have a dispute over who wrote the chorus or who came up with the melodies and the entire lyrics, listening to Wendy O. Williams version was refreshing. The song is contained in his 1984 Grammy-award nominated album, WOW. The song has some great beats, and the entire production was too good for a 1984 song.

Next up is a song by Australian outfit Divinyls. The song “Boys In Town” is from 1981 and is in the band’s debut album, Desperate. Apart from The Legend of Billie Jean soundtrack, this song is in the 1982 movie Monkey Grip. Christina Amphlett’s vocals stand out throughout the song. The beats are too good for a 1980s song. “Boys In Town” is nominated for the best song at the 1981 Countdown Music Awards. It is #83 on Triple M’s “Ozzest 100,” which ranks the most Australian songs of all time.

Narrowly missing out on the top spot is another Divinyls single from their 1985 album, What a Life! Although not as popular as previous hits, “Sleeping Beauty” and “Pleasure and Pain,” is my favorite. Christina Amphlett and Mark McEntee complement each other well throughout the song. They have great vocals and guitar tunes, showing Mark’s talent.

The top song on our ranking of all songs from The Legend of Billie Jean soundtrack is a Grammy-nominated song from Pat Benatar’s sixth studio album, Seven the Hard Way. According to Helen Slater, “Invincible” always reminds her of the scene in the film where Lisa Sipson gets her period. This track is a hit reaching #10 on the US Billboard Hot 100. It’s a soundtrack for the 2002 movie, Hysterical Blindness.

The best Bluetooth speakers to buy in 2022

The 10 Best Chingy Songs of All-Time