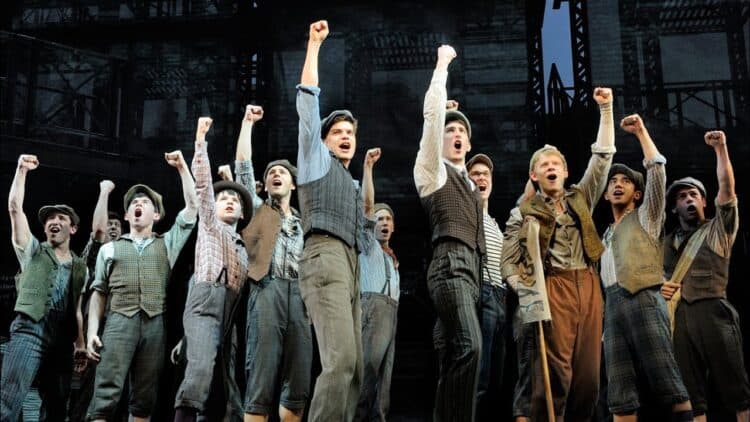 In North America, the 1992 American historical comedy-drama, Newsies, was a Walt Disney Pictures production that featured Kenny Ortega in his film directing debut. In the UK, it was titled The News Boys. The movie was inspired by the 1899 Newsboys Strike that took place in New York City and featured seven original songs that were composed by Alan Menken and J.A.C. Redford. From those seven songs, there were five alterations that were either composition adjustments, chorales, or reprisals. The star cast of Newsies was Christian Bale, Robert Duvall, Ann-Margaret, and Bill Pullman. At the box office, this movie did not do well but was far more successful after it was released on home video. It eventually became a Broadway production that received Tony Award nominations, as well as a win for Best Original Score and a win for Best Choreography.

Newsies was released in theaters on April 10, 1992, and failed to rake in enough to recover from the fifteen million dollars that went into it. When Walt Disney Home Video released it shortly afterward, the fan base began to grow, making Newsies successful enough to warrant a DVD release in 2002, then a 2012 release as a Blue-ray twentieth-anniversary edition. Newsies was not intentionally filmed to be a musical but the young cast featured in it were all trained in dance each time the twelve songs in the movie played as part of this theatrical production. However, between the songs and the dance routines, it was enough to inspire Broadway to give this box office failure a revamp that turned it into a cult favorite with a loyal fan following. Again, even as this movie failed to make a noteworthy impression in theaters, it did fair out better as a home video purchase or rental. As a musical, the songs performed on Broadway earned far more respect than they ever did in the movie and on the soundtrack.

(High Times, Hard Times) won a 1993 Golden Raspberry Award for Worst Original Song. Normally, when songs are ranked on a list, award-winning songs are ranked the highest. In this case, this questionable excuse for a song has managed to pull off the polar opposite. Considering as a stage production Newsies earned a Tony Award for Best Original Score, “High Times, Hard Times’ seems to be a misfit compared to the rest of the musical roster. Unfortunately for Ann-Margaret, (High Times, Hard Times) was not considered a good enough song that should appear as a career highlight on her resume. In the movie, she certainly lived up to the stage icon persona, but as a credible actress, not so much.

6. Carrying the Banner (by Alan Menken and Jack Feldman)

(Carrying the Banner) was the first song featured on the Newsies soundtrack. In the lyrics, this playful number, composed by Alan Menken and performed by Jack Feldman, revolved around a working man’s ups and downs in an industry that may not seem perfect but it was enough to keep him happy with what he was doing. Not only was this the first song in the movie and soundtrack, but it also served as the finale.

5. The World Will Know (by Alan Menken, Jack Feldman, and Christian Bale)

In the movie, the main character, Jack Kelly (played by Christian Bale), rallied his coworkers to go on strike against the newspaper industry. This was done so as a means to stand up for their rights and fight for what they believe has been an injustice served against them by a publishing giant that favored corporate greed over professional ethics. With Christian Bale taking the lead to fire up what was now the Newsies Union, this musical rally cry served the purpose of a motivational tune for the movie and soundtrack. It first did its part as the third song, as well as near the end, just before the finale of (Carrying the Banner). As part of the Broadway musical, however, Jeremy Jordan’s performance as Jack Kelly turned it into quite a gem.

4. King of New York (by Alan Menken and Jack Feldman)

(King of New York) was a song of response by the Newsies Union once they learned a story about them was printed. Sung as a song of pride, this playful musical glorified the enjoyment each striking member of the newspaper delivery team experienced, even if it was for simply one minute’s worth of fame.

3. Once and For All (by Alan Menken and Jack Feldman)

Performed by the cast ensemble of Newsies, (Once and For All) was a song about standing up against corporate greed on behalf of the blue-collar working class who became fed up with what they felt was mistreatment. The entire movie was about remembering the events of 1899 and the newspaper delivery strike that took place in New York City. As far as the strikers were concerned, the fight for freedom and respect was a war worth waging against a social class that allowed pride and arrogance to get in the way of understanding a newspaper publishing company needs to do more than simply print the news for the masses to read. It needs to be held responsible for every little thing they do and how they treat the people, regardless if they happen to work for them or not. As far as the Newsies were concerned, win or fail, they were standing up for their rights in an effort to put an end to this injustice once and for all.

In the movie and soundtrack, (Sante Fe) was the second song featured on the tracklist. In this song, the desire to leave New York City in favor of Sante Fe was the musical narrator’s focus as he sought to live a more relaxed life as opposed to the hectic rat race that seemed a bit too inhuman for his tastes. It played again in the movie mid-way and on the soundtrack as a reprise.

(Seize the Day) was played twice as a song in the movie and on the soundtrack. It played for the first time as the fourth song, then again as a chorale three songs later. This inspirational musical focused on everyone getting up on their feet and standing for what they believe in as they seize the moment and the day. On Broadway, this song became a classic favorite, thanks to the performances carried out by Ben Fankhauser and Jeremy Jordan.

Is Artificial Intelligence Made in Humanity’s Image? Lessons for an AI Military Education