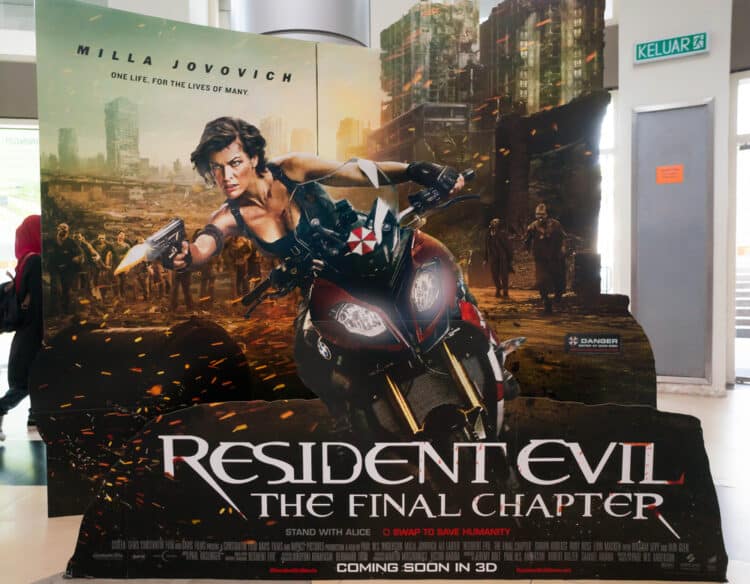 If video games are your thing, I believe you will enjoy this film. Resident Evil is the most successful video game-based feature film series. This particular movie is the first film in the Resident Evil franchise. Initially, Resident Evil was a 1996 survival horror PlayStation video game developed by Capcom Productions. This particular film was released in 2002 for the GameCube video game console and is characterized as a fictional horror and action movie. It was both composed and directed by Paul W. S. Anderson. If you have watched this movie, I am sure you agree that it features the best actors and actresses in the industry. These stars include James Purefoy, Colin Salmon, Milla Jovovich, Eric Mabius, Michelle Rodriguez, and Martin Crewes. One amazing fact that you might not be aware of as a Resident Evil fan is that the movie was initially known as Resident Evil: Ground Zero. The plot of this film follows amnesiac heroine Alice and a group of Umbrella Corporation commandos as they struggle to contain the T-virus breakout, which turns the staff into man-eating zombies at a secret underground facility that turns into chaos. To prevent further virus infection, the complicated computer shuts down the base area. The Resident Evil franchise comprises six movies, including this first release. The other movies are the 2004 Apocalypse, the 2007 Extinction, the 2010 Afterlife, the 2012 Retribution, and The Final Chapter, released in 2016. Resident Evil consists of a playlist of 9 credited songs by various artists, including Nine Inch Nails, Slipknot, and Coal Chamber. The original score was composed by Marco Beltrami. This article lists all the Resident Evil (2002) soundtrack songs.

“Supplementary Soundscapes” is one of the tracks that made this soundtrack a hit. This music sounds when Alice and the team crawl through the pipes under which the crowds of zombies await. “Supplementary Soundscapes” was composed and performed by Junkie XL, also known as Tom Holkenborg. Junkie XL is well known as a soundtrack composer and performer. He has been featured on several film soundtracks, including Spider-Man: No Way Home, Lethal Weapon, Teenage Mutant Ninja Turtles: Out of the Shadows, and Good Girls.

This track features a legendary chorus that stands out. “Invisible Wounds” appears as the third and final song playing during the end credits. Burton C. Bell, Dino Cazares, Christian Olde Wolbers, and Raymond Herrera composed this song. The many positive reviews the score received is evidence enough that the fans greatly loved this track.

Coal Chamber was an excellent and very talented rock band from Los Angeles, California. “Fiend” is one of the famous tracks that put them in the limelight. “Something Told Me” was written by Miguel Rascon, Rayna Foss-Rose, Dez Fafara, and Mike Cox. The Coal Chamber performed this track as the second song playing during the end credits. If you want to experience some great music, this soundtrack with scores like these is perfect.

This would be a good song for a racing game soundtrack. There are many different versions of this track, which were all received differently by different audiences. This particular version performed by Slipknot was fairly received and loved. The song’s original version was composed by Shawn Crahan and Joey Jordison. “My Plague” was performed as the first song during the end credits of the soundtrack. EMI April Music Inc./Music That Music published the track.

One word that will perfectly describe this score is amazing. This version of the song was released on Front Line Assembly’s album, Implode, in 2009. This classic will definitely get you dancing and humming along to the tune. “Torched” original version was composed by Bill Leeb and Christopher Peterson. This song goes from a silent verse to a fantastic chorus in a manner that you’ll never hear in another electro-industrial song.

Apollo 440 is a renowned electronic music group who have composed, produced, and recorded a total of five studio albums. They are well-known for doing what they do best, which is evident in their performance on this particular single. “Wall Of Death” was composed by Trevor Gray, Paul Colbourne, Noko, and Howard Gray and published by Reverb Music Ltd. “Wall Of Death” plays during Spence’s lengthy flashback, which reveals his role in the T-virus outbreak.

This track propelled Spineshark to the limelight. Many versions of this track have been released by different musicians, including the instrumental version. This track features the soundtrack’s best fusion of industrial metal, drums, and bass. “Cyanide” plays during Spence’s lengthy flashback, which reveals his role in the outbreak. The track was written by Rob Garcia, Tom Decker, Soren Sarkisyan, and Jonny Santos, while Roadrunner Records recorded and released it.

Aside from being contained in the Resident Evil (2002) soundtrack, this track was also released on Nine Inch Nails’ album of the same name. The track features Alternative/Indie, pop, Korean rock, alt, and rock styles, which are pretty great. It was initially released in 1992, and it briefly plays when Alice kicks the attacking infected dog in mid-air.

The very beginning of the song plays briefly when Alice and the infected dog face each other for the first time, and both stand still, waiting for the other one to make the first move. The track is the original work of Bill Leeb and Christopher Peterson. Without a doubt, the Resident Evil (2002) soundtrack features excellent scores. I would suggest you listen to it.

Counter-Attacks and Can-Kicking in the Russo-Ukrainian War

The 10 Best The Cowsills Songs of All-Time