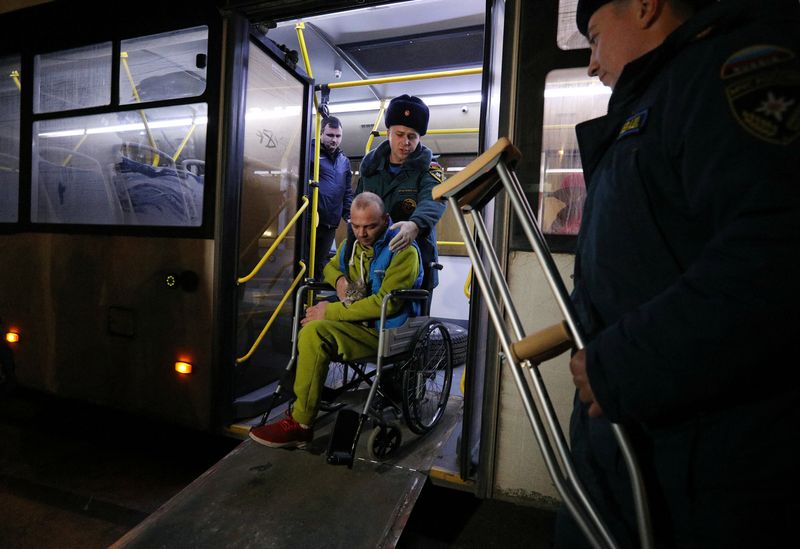 © Reuters. Members of the Russian Emergencies Ministry help a wheelchair user, who was evacuated from the Russian-controlled part of Kherson region of Ukraine, to leave a bus upon arrival at a local railway station in the town of Dzhankoi, Crimea November 10, 2022.

POSAD POKROVSKIY, Ukraine/KYIV (Reuters) -Moscow announced on Friday that its forces had completed their withdrawal from the strategic Ukrainian city of Kherson after Ukraine said it had reclaimed dozens of landmine-littered settlements abandoned by the Russians in the south.

The Russian defence ministry said it had finished the pullout of troops from the western bank of the Dnipro river, Russia’s state TASS news agency reported, two days after Moscow announced the surprise retreat.

There was no immediate comment from Ukraine, but the announcement would appear to contradict Ukrainian reports that thousands of Russian troops were still on the west side of the river.

Ukraine’s Defence Minister Oleksii Reznikov told Reuters on Thursday it would take at least a week for Russia to pull out of Kherson. He estimated Russia still had 40,000 troops in the region, and said intelligence showed its forces remained in and around the city.

President Volodymyr Zelenskiy said in an overnight address that Ukrainian forces had liberated 41 settlements as they advanced through the south, indicating one of the swiftest and most dramatic shifts of control in almost nine months of war.

Ukraine’s general staff said it was keeping its latest movements under wraps but listed 12 settlements it said had been freed as of Wednesday: one of them, Blagodatne, lies around 30 km (20 miles) from the centre of Kherson, a port at the mouth of the Dnipro river.

“Offensive actions in the specified direction continue,” it said in a Friday update. “Due to the safety of the operation, the official announcement of the results will be made later.”

Wrecked buildings and a destroyed truck sitting on a highway leading to Kherson marked the former front line in Posad Pokrovskiy, 12 km (seven miles) back up the highway. A Ukrainian flag fluttered above a bus stop pitted by bullet holes.

Homes and buildings on both sides of the road were gutted by shellfire and shattered branches hung from the trunks of trees lining the highway. Ukrainian soldiers manned checkpoints waving at passing Ukrainian military vehicles.