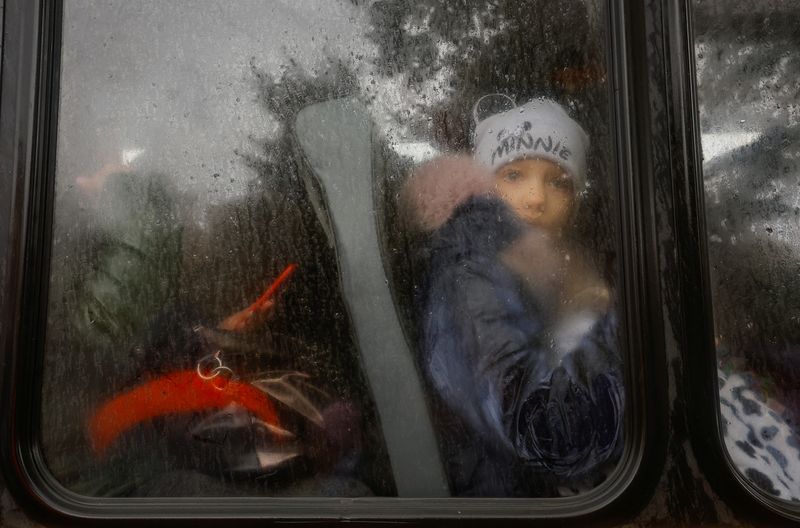 By Jonathan Landay and Pavel Polityuk

MYKOLAIV, Ukraine (Reuters) – Under pressure in the south of Ukraine, Russia fired missiles and drones into Ukrainian-held Mykolaiv on Sunday, destroying an apartment block in the ship-building city near the front and warning the war was trending toward “uncontrolled escalation”.

Mykolaiv lies roughly 35 km (22 miles) northwest of the front line to occupied Kherson, the southern region that is the target of a major offensive by Ukrainian forces to retake territory Russia captured soon after the Feb. 24 invasion.

Russian Defence Minister Sergei Shoigu, who Russian nationalists have blamed for Moscow’s setbacks in the war, discussed the “rapidly deteriorating situation” in calls with his French and Turkish counterparts, the ministry said.

Shoigu said Ukraine could escalate with a “dirty bomb,” conventional explosives laced with radioactive material, without providing evidence. Ukraine does not possess nuclear weapons, while Russia has said it could protect Russian territory with its nuclear arsenal.

In one conventional Russian attack on Sunday, a missile strike wiped out the top floor of an apartment block in Mykolaiv, propelling shrapnel and debris across a plaza and into neighbouring buildings where windows buckled and walls cracked. Cars were crushed under the rubble, Reuters witnessed. No fatalities were reported.

“After the first blast, I tried to get out, but the door was stuck. After a minute or two, there was a second loud blast. Our door was blown into the corridor,” said Oleksandr Mezinov, 50, who was awoken from his bed by the blasts.

Ukraine shot down 14 Russian “kamikaze” drones over Mykolaiv overnight, regional governor Vitaliy Kim said on Telegram. The drones are designed to explode on impact and have hammered Ukraine’s energy infrastructure this month.

Kim said Russia also attacked with S-300 missiles, one of which hit the five-storey apartment building.

Russian troops have withdrawn from parts of the front in recent weeks and occupation authorities are evacuating civilians deeper into Russian-held territory before an expected battle for Kherson, the regional capital on the west bank of the Dnipro river. Kherson is a gateway to Crimea, which Russia annexed in 2014.

Russian-installed authorities in Kherson said one man was killed and three injured after a blast in the city, a Russian state news agency said. Emergency services said an improvised explosive device was detonated near a car in the city.

Reuters could not verify the attack in Kherson, or Kim’s report on missiles and drones.

Ukraine’s advances in recent weeks around Kherson and in the country’s northeast have been met with intensifying Russian missile and drone attacks on civilian infrastructure, which have destroyed about 40% of Ukraine’s power system ahead of winter.

Russia and Ukraine have accused each other of planning to blow up the Nova Kakhovka dam, which holds roughly as much water as the Great Salt Lake in the U.S. state of Utah. Breaching it could flood a swathe of southern Ukraine, including Kherson.

Neither side has produced evidence to back up their claims about the dam, which supplies water to Crimea and the Russian-held Zaporizhzhia nuclear power plant.

In Kherson the occupation authorities instructed civilians to get out, in the latest sign of the problems Russia is facing in what Moscow calls a “special military operation” in Ukraine.

“Due to the tense situation at the front, the increased danger of massive shelling of the city and the threat of terrorist attacks, all civilians must immediately leave the city and cross to the (east) bank of the Dnipro!” occupation authorities posted on Telegram.

‘WE WANTED TO STAY’

Thousands of civilians have left Kherson after warnings of a Ukrainian offensive to recapture the city.

At Oleshky on the east bank, Reuters saw people arriving by boat from Kherson, loaded with boxes, bags and pets. One woman carried a toddler under one arm and a dog under the other.

“I really didn’t want to (leave), I’m still in work,” one resident said. “We wanted to stay here in the region, but now we don’t know.”

Ukraine’s military said it was making gains in the south, taking over at least two villages it said Russia had abandoned.

Reuters could not independently verify the accounts.

Ukrainian President Volodymyr Zelenskiy said the Russian attacks on energy infrastructure had struck on a “very wide” scale. He pledged his military would improve on an already good record of downing missiles with help from its partners.

With the war about to start its ninth month and winter approaching, the potential for freezing misery loomed.

More than a million people were without power, presidential adviser Kyrylo Tymoshenko said. A city official said strikes could leave Kyiv without power and heat for days or weeks.

PopGrip JumpStart review: what if a battery bank were also a PopSocket?

What directional liquidity pooling brings to DeFi By Cointelegraph