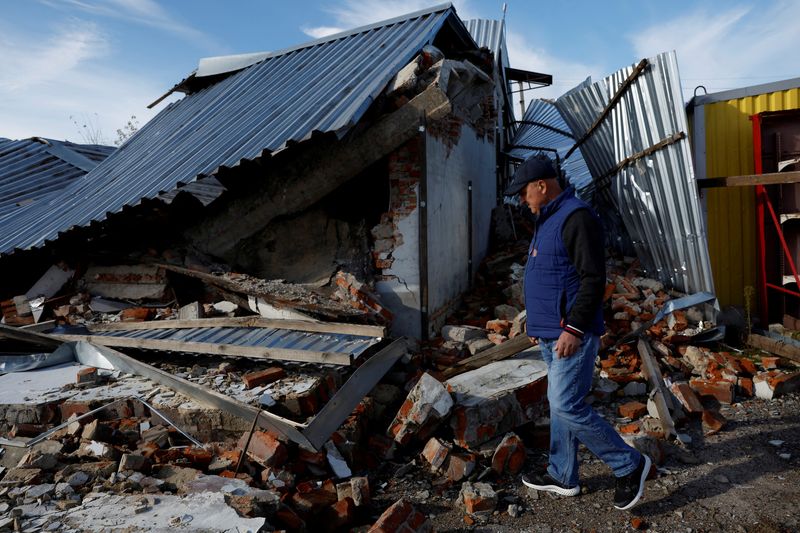 © Reuters. Victor walks across the forecourt of his garage which was completely destroyed during Russian strikes, amid Russia’s attack on Ukraine, in Balakliia, Ukraine, October 22, 2022. REUTERS/Clodagh Kilcoyne

NEAR KHERSON FRONTLINE, Ukraine (Reuters) -Russia was expected to press its case at the U.N. Security Council on Tuesday that Ukraine is preparing to use a “dirty bomb” on its own territory, an assertion dismissed by Western and Ukrainian officials as a pretext for escalating the war.

Moscow sent a letter detailing the allegations to the United Nations late on Monday, and diplomats said Russia planned to raise the issue at a closed meeting with the Security Council on Tuesday.

“We will regard the use of the dirty bomb by the Kyiv regime as an act of nuclear terrorism,” Russia’s U.N. Ambassador Vassily Nebenzia told U.N. Secretary-General Antonio Guterres and the Security Council in the letter, seen by Reuters.

Kremlin spokesman Dmitry Peskov on Tuesday repeated Russia’s allegations and said the West was foolish to dismiss them.

They follow hints from Moscow that it might be forced to use a tactical nuclear weapon against Ukraine, whose president, Volodymyr Zelenskiy, said the “dirty bomb” allegation showed Moscow was planning such an attack and seeking to blame Kyiv.

With Ukrainian forces advancing into Russian-occupied Kherson province, threatening a major defeat for Moscow, top Russian officials phoned their Western counterparts on Sunday and Monday to air their suspicions.

Russia has alleged that Kyiv has ordered two organisations to create a dirty bomb – an explosive device laced with radioactive material, without giving any evidence.

France, Britain and the United States said the allegations were “transparently false” and Washington warned Russia there would be “severe consequences” for any nuclear use, while saying there were no signs of that yet.

Russia’s defence ministry said the aim of a “dirty bomb” attack by Ukraine would be to blame Moscow for the resulting radioactive contamination, which it said Russia had begun preparing for.

In an apparent response to Moscow’s allegation, the U.N. nuclear watchdog said it was preparing to send inspectors to two unidentified Ukrainian sites at Kyiv’s request, both already subject to its inspections.

Russia’s state news agency RIA has identified what it said were the two sites involved – the Eastern Mineral Enrichment Plant in the central Dnipropetrovsk region and the Institute for Nuclear Research in Kyiv.

Russian President Vladimir Putin has not spoken publicly about the “dirty bomb” allegations but on Tuesday said the country needed to speed up decision-making in relation to what it calls its “special operation” to demilitarise Ukraine.

Speaking at the first meeting of a new coordination council to manage the government’s work on the home front, Putin said increased coordination of government structures and regions was necessary.

German President Frank-Walter Steinmeier arrived in Ukraine on Tuesday on his first visit since Russia invaded on Feb. 24 and was due to meet Zelenskiy, as Berlin hosted what it said was a conference on a “Marshall Plan” to rebuild Ukraine.

Steinmeier said Berlin was working to help Ukraine with air defence equipment and would focus on helping to repair destroyed infrastructure, such as power grids, as fast as possible before winter arrives.

Zelenskiy told the Berlin conference via video link that Russian rockets and Iranian-made drones had destroyed more than a third of his country’s energy sector, but that Kyiv had yet to receive “a single cent” for a recovery plan worth $17 billion.

In southern Ukraine, Russia has ordered civilians in Kherson to evacuate territory it controls on the western bank of the Dnipro River, where Ukrainian forces have been advancing this month after Russia claimed to have annexed the area.

A defeat for Russia there would be one of its biggest setbacks since its invasion.

A Reuters reporter in a remote hamlet near part of the Kherson frontline heard neither artillery nor shooting.

Residents in the village, which cannot be identified under Ukrainian military regulations, said they hoped Russian forces who had shelled them in the past would soon withdraw from Kherson.

“My old teacher was killed. There was a humanitarian distribution (effort) and the Russians shelled it,” said Mikola Nizinets, 39.

“You fall asleep at night and you don’t know if you will wake up,” he said, as dozens of villagers waited to collect water, food packets and simple wood-burning stoves delivered by aid volunteers.

With no power or gas and little food or potable water in the area, many residents have fled, leaving abandoned cattle to roam wild in the surrounding fields alongside the tails of expended munitions poking from the soil.

Russia’s defence ministry said on Tuesday its forces had repelled Ukrainian attacks in the Kherson region.

Reuters could not verify the reports.

Since Russia’s forces suffered major defeats in September, Putin has escalated the war, calling up hundreds of thousands of reservists, announcing the annexation of occupied territory and repeatedly threatening to use nuclear weapons to defend Russian land.