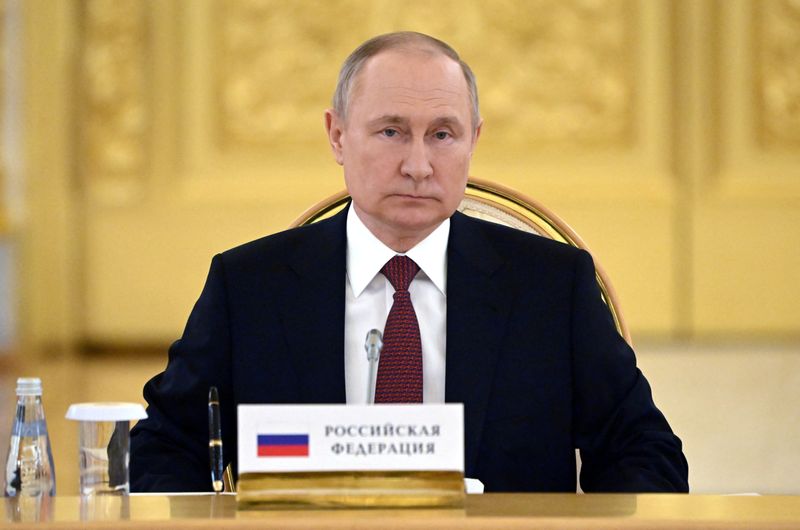 (Reuters) – A group of St Petersburg local politicians who called for President Vladimir Putin to be sacked over the war in Ukraine faces the likely dissolution of their district council following a judge’s ruling on Tuesday, one of the deputies said.

Nikita Yuferev said the judge decided that a series of past council meetings had been invalid, paving the way for it to be broken up by the regional governor.

Another council member, Dmitry Palyuga, said the same court then fined him 47,000 roubles ($780) for “discrediting” the authorities by calling for Putin’s removal. Court officials could not be reached by telephone for comment.

Four more members of the Smolninskoye local council are due to appear in court in the next two days.

Last week, a group of deputies from the council appealed to the State Duma to bring charges of state treason against Putin and strip him of power, citing a series of reasons including Russia’s military losses in Ukraine and the damage to its economy from Western sanctions.

Another local deputy said 65 municipal representatives from St Petersburg, Moscow and several other regions had signed a petition she published on Monday calling for Putin’s resignation.

While posing no current threat to Putin’s grip on power, the moves mark rare expressions of dissent by elected representatives at a time when Russians risk heavy prison sentences for “discrediting” the armed forces or spreading “deliberately false information” about them.

Palyuga told Reuters before Tuesday’s hearing that the group’s appeals were aimed not only at liberal Russians but also at “people loyal to the authorities who are starting to have doubts when they see the lack of success of the Russian army”.

He said he expected the numbers of such people to increase after last week’s lightning counter-offensive in which Ukraine drove Russian forces out of dozens of towns and recaptured a large swathe of territory in its northeast Kharkiv region.

“Of course, what is happening now has successfully coincided with our agenda. Many people who liked Putin are starting to feel betrayed. I think the more successfully the Ukrainian army operates, the more such people will become,” he said.

Russian political analyst Tatiana Stanovaya said the greater risk to the Kremlin lay not in the councillors’ protest itself but in the danger of responding too harshly to it.

“The reaction, or overreaction, may cause more political damage to the regime than this petition. But I have no doubts that all those who signed the petition will (come) under political pressure,” said Stanovaya, founder of the independent analysis project R.Politik.

Thousands of legal cases have been launched against people accused of discrediting the army, usually leading to fines for first-time offences, but a Moscow district councillor was jailed for seven years in July after being convicted of spreading false information. Several other journalists and opposition figures have been charged and face potential prison terms.

Kremlin spokesman Dmitry Peskov said on Tuesday that critical points of view were tolerated, within the limits of the law. “As long as they remain within the law, this is pluralism, but the line is very, very thin, one must be very careful here,” he said.

Ksenia Thorstrom, a St Petersburg local councillor who published Monday’s petition calling for Putin’s resignation, said it was too early to say how the campaign would turn out.

“To call for a politician to resign is absolutely normal. There can be nothing criminal about it,” she told Reuters.

“Of course there is a certain risk, but to show solidarity with our colleagues – independent politicians who still remain in Russia – is much more important.”

7 Simple Ways To Give Students More Control in the Classroom