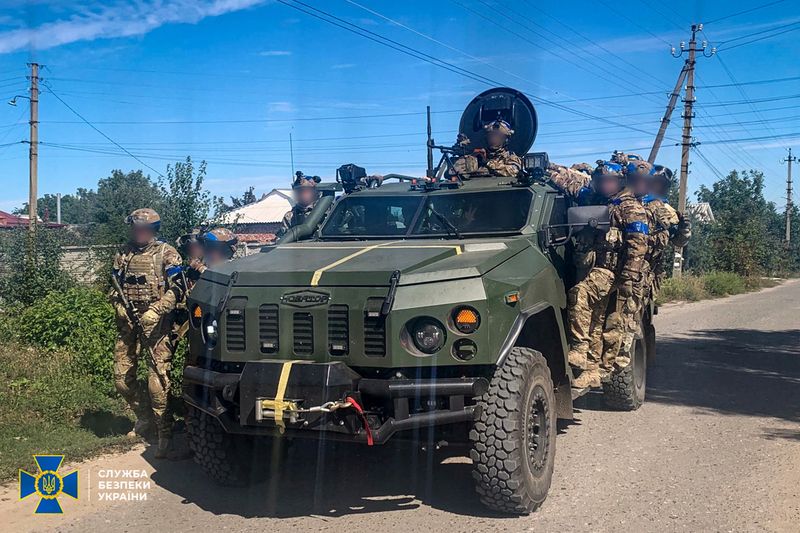 © Reuters. Service members of the State Security Service of Ukraine patrol of an area of the recently liberated town of Kupiansk, amid Russia’s attack on Ukraine, in Kharkiv region, Ukraine in this handout picture released September 10, 2022. Press Service of the St

By Max Hunder and Vitalii Hnidyi

KYIV/HRAKOVE, Ukraine (Reuters) -Moscow abandoned its main bastion in northeastern Ukraine on Saturday, in a sudden collapse of one of the war’s principal front lines after surging Ukrainian forces threatened to encircle the area in a shock advance.

The swift fall of Izium in Kharkiv province was Moscow’s worst defeat since its troops were forced back from the capital Kyiv in March, and could prove a decisive turning point in the six-month-old war, with thousands of Russian soldiers abandoning ammunition stockpiles and equipment as they fled.

The state-run TASS news agency quoted Russia’s defence ministry as saying it had ordered troops to leave the vicinity to reinforce operations elsewhere in neighbouring Donetsk.

The head of Russia’s administration in areas in Kharkiv it controls told all residents to evacuate the province and flee to Russia to “save lives”, TASS reported. Witnesses described traffic jams of cars with people departing Russian-held territory.

Ukrainian officials stopped short of confirming they had recaptured Izium, but President Volodymyr Zelenskiy’s chief of staff, Andriy Yermak, posted a photo of troops on its outskirts. Earlier, he tweeted an emoji of grapes. The city’s name means “raisin”.

The Russian withdrawal announcement came hours after Ukrainian troops captured the city of Kupiansk farther north, the sole railway hub supplying Russia’s entire frontline across northeastern Ukraine. That left thousands of Russian troops abruptly cut off from supplies across a stretch of front that has seen some of the most intense battles of the war.

There were signs of trouble for Russia elsewhere along its remaining positions at the eastern front, with pro-Russian officials acknowledging difficulties at other locations and Ukrainians hinting at more advances to come.

Days ago, Kyiv’s forces burst through the frontline and have since recaptured dozens of towns and villages in a swift mechanised assault, surging forward dozens of kilometres a day.

Early on Saturday, Ukrainian officials posted photos of their troops raising the country’s blue and yellow flag in front of city hall in Kupiansk, dealing a blow that appeared to prove decisive for Russian garrisons supplied by the city’s railways.

“To achieve the stated goals of the Special Military Operation for the liberation of Donbas, it was decided to regroup the Russian troops located in the districts of Balakliia and Izium for the purpose of increasing efforts in the Donetsk direction,” TASS quoted Russia’s defence ministry as saying.

In Hrakove, one of dozens of villages recaptured in the Ukrainian advance, Reuters saw burnt-out vehicles bearing the “Z” symbol of Russia’s invasion. Boxes still full of ammunition were scattered with strewn rubbish in positions the Russians had abandoned in evident haste.

“Hello everyone, we are from Russia,” was spraypainted on a wall. Three bodies lay in white body bags in a yard.

The regional chief of police, Volodymyr Tymoshenko, said Ukrainian police moved in the previous day, and checked the identities of local residents who had lived under Russian occupation since the invasion’s second day.

“The first function is to provide help that they need. The next job is to document the crimes committed by Russian invaders on the territories which they temporarily occupied.”

A witness in Valuyki, a town in Russia’s Belgorod region near the border with Ukraine, told Reuters she saw scores of people from Kupiansk, with families eating and sleeping in their cars along roads.

“I was at the market today and saw a lot of people from Kupiansk. They say half of the city was taken by the Ukrainian army and Russia is retreating… the fighting is getting closer,” the witness said.

Belgorod governor Vyacheslav Gladkov said officials were giving food and medical aid to people queuing at a crossing into Russia. Senator Andrey Turchak, from the pro-Kremlin United Russia party, reported more than 400 vehicles at the frontier.

Reuters could not confirm the battlefield accounts independently.

The abrupt abandonment of Russia’s front line south of Kharkiv city brought a swift and sudden end to a period during which the war had been fought as a relentless grind on a static front, favouring Moscow’s advantage in raw firepower.

Russian forces had fought hard to capture Izium early in the war, and then used the city as the logistics base for one of their main campaigns – a months-long assault from the north on the adjacent Donbas region.

There were signs that Ukraine could capitalise on the disarray with assaults along other areas of the eastern front. Denis Pushilin, head of the Russian-installed separatist administration in Donetsk province, said the situation in Liman, east of Izium, “remains quite difficult – as in a series of settlements in the north of the republic”.

A bit further east, Ukrainian officials hinted at a possible attempt to recapture Lysychansk, which Moscow seized in July after weeks of fighting in one of the war’s bloodiest battles.

Ukrainian regional governor Serhiy Gaidai was quoted in Ukrainian media as saying Ukrainian troops had been spotted on the city’s outskirts. The city’s name means “fox”, and after his tweet of grapes, Yermak tweeted a fox emoji.

ECB rate rises will be more gradual than Fed’s, says Draghi By Reuters