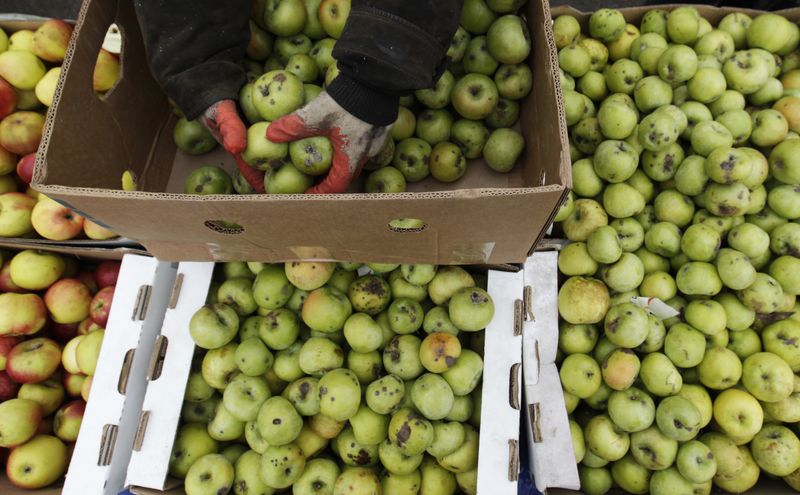 © Reuters. FILE PHOTO: An employee sorts apples at a food market, which operates once a week on Saturday, in the Russian southern city of Stavropol, March 7, 2015. REUTERS/Eduard Korniyenko/File Photo

MOSCOW (Reuters) – Consumer prices in Russia rose slightly for the eighth consecutive week in mid-November, data published on Wednesday showed, driven by goods including eggs and tea and domestic flights.

That was up from a 0.01% rise in prices recorded a week earlier and which, should price rises continue, could pose a challenge for the Russian central bank that last month raised expectations it would end its rate-cutting cycle, as it held its key rate at 7.5%.

Last week, Central Bank Governor Elvira Nabiullina said Russia’s inflationary and disinflationary risks were balanced in the short term, with the implication the central bank was unlikely to change its key interest rate next month.

In a separate set of data, Russia’s economy ministry said inflation was running at an annualised rate of 12.40% as of Nov. 14, down from 12.52% a week earlier.

The central bank targets inflation at 4%, which it aims to achieve by 2024. It has forecast inflation to fall to 5%-7% next year.

On Wednesday, Rosstat said that price increases were recorded in eggs, tea and vegetables, as well as in some meat and fish products, while the cost of an economy class flight ticket was up by 3.2% compared to a week earlier.

Nostalgia is at the core of Pokémon, even as it moves into the future