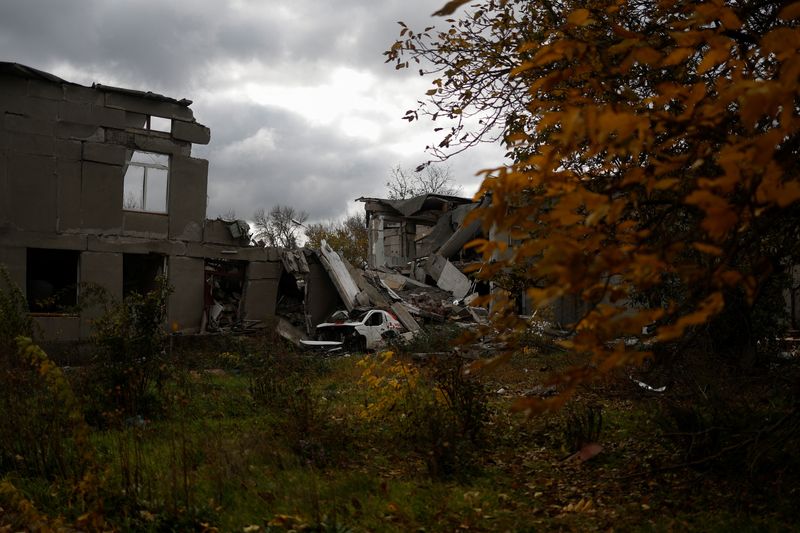 © Reuters. A view shows a school building destroyed by a Russian air strike in a village near a frontline in Mykolaiv region, Ukraine October 26, 2022. REUTERS/Valentyn Ogirenko

FRONTLINE NORTH OF KHERSON, Ukraine (Reuters) – Squatting in a weed-choked irrigation canal, concealed from prowling enemy drones by overhanging trees, the Ukrainian soldier dismissed media reports that reclaiming the Russian-held port city of Kherson would be a cakewalk.

“They have good defensive lines with deep trenches, and they are sitting deep underground,” said Vitalii, gripping an assault rifle and nodding at the tree line where his foes were bunkered. “Ukrainian armored forces need to destroy those defensive lines.”

He and others in the unit holding positions north of Kherson told a visiting Reuters reporter on Wednesday that they have watched Russian troops bolstering their lines, helped by newly mobilized conscripts.

“They are reinforcing their positions, especially on the flanks,” Angel, nom de guerre of a bearded Ukrainian officer, said outside his unit’s command post in a semi-destroyed village, most of whose residents fled months ago.

“They believe the deeper they dig themselves in, the safer they will be.”

The location cannot be identified under Ukrainian military regulations.

Russian forces have been under pressure from long-range artillery and rocket fire from advancing Ukrainian troops who began moving in mid-August to reclaim Kherson, which sits on the west bank of the sprawling Dnipro River, and its district.

The city’s loss would be another in a string of defeats for Russian President Vladimir Putin, who last month proclaimed Kherson province and three other partially occupied regions part of Russia even as Ukrainian forces reclaims swathes of territory.

Kherson’s capture could leave thousands of Russian troops trapped on the Dnipro’s western bank unable to cross easily to the east. Military experts said it also could bring Russian bases in the annexed Crimea peninsula within range of heavy artillery.

Expectations rose last week that Russian forces were girding to relinquish Kherson, when Moscow-appointed occupation authorities began evacuating tens of thousands of residents by ferries to the Dnipro’s east bank. Kherson is the only regional capital Russian forces have taken in the “special military operation” Putin launched in February.

The newly appointed commander of Moscow’s occupation forces has said the situation in the region was “very difficult” and that “difficult decisions cannot be ruled out.”

But the commander of the Ukrainian unit visited by Reuters on Wednesday saw no sign of Russians leaving.

“In the press they say that the Russians are afraid and will withdraw,” said the commander, whose nickname is Nikifor. “It’s not true.”

Sporadic exchanges of artillery fire resounded over vast stretches of fields and hedgerows dividing Nikifor’s men and the Russians south of the Ukrainian-held city of Mykolaiv.

In places, abandoned cows nosed through the undergrowth as pigeons took flight into a near-cloudless sky. Rusting hulks of Russian armored vehicles marked confrontations with Ukrainian troops who advanced last month some 20 km (12.4 miles) in two days to their current lines.

At one point, a Ukrainian helicopter swept low over the horizon, unleashed a fusillade of rockets toward the Russian trenches and banked away, ejecting flares to divert any heat-seeking anti-aircraft missiles launched in its direction.

Nikifor said there had been a recent uptick in Russian shellfire after weeks in which it was significantly diminished.

“In our area, they are quite active,” said the commander. “They shell every day, and they are digging trenches and are preparing for defence. We can see it.”

He said the Russians would be forced out of Kherson eventually, even if they were bolstering their positions now, noting that Putin planned to subdue the entire country in three days when he launched his full-scale invasion in February.

“They didn’t have plans to retreat,” Angel added. “It never occurred to them that they would have to retreat.”

Build Student Innovators With the Solve for Tomorrow Contest