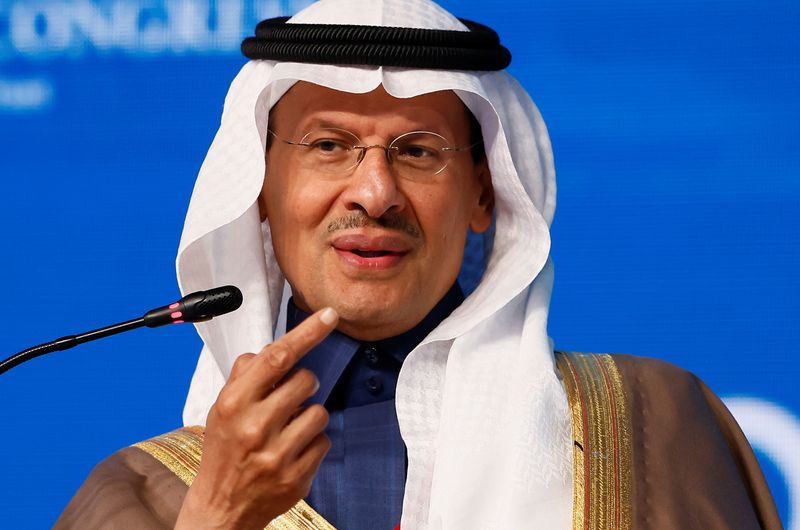 Investing.com — There are another two weeks to go for the OPEC+ meeting, but the Saudis and Russians have decided not to sit back and let the market collapse continue.

In an urgent response to a Wall Street Journal story on Monday, Saudi Energy Minister Abdulaziz bin Salman denied that the 23-nation oil producing alliance under his charge was working on a production hike of 500,000 barrels per day to announce at OPEC+’s Dec. 4 meeting.

If the WSJ report had been true, it would have been a pivot to the 2-million-barrel per day cut that OPEC+ had announced for November. It would have been a hike small in barrels, yet huge in goodwill, doing wonders for Saudi-U.S. relations but, unfortunately, further hammering already free-falling crude prices.

Both New York-traded , or WTI, the benchmark for U.S. crude, and London’s , the global gauge for oil, hit their lowest since the beginning of the year in Monday’s early trading, partly based on the WSJ story.

“It is well-known that OPEC+ does not discuss any decisions ahead of the meeting,” Abdulaziz said, referring to the Dec. 4 meeting.

He added: “The current cut of 2M barrels per day by OPEC+ continues until the end of 2023 and if there is a need to take further measures by reducing production to balance supply and demand we always remain ready to intervene.”

And just like on cue, Russian Deputy Prime Minister Alexander Novak, Abdulaziz’s closest non-Gulf ally in OPEC+, came in with his own responses to the upcoming Dec. 5 decision by Western nations on a prospective import ban and price cap on Russian oil.

Novak reiterated Russia’s stand of not selling its oil to nations that would participate in the price-cap, a plan devised by the West to limit the funding that Moscow could put in its war against Ukraine. The Russian deputy premier also said something else that helped crude prices go back into the positive for the day: in the event of an oil price cap, Russia may also reduce oil production.

“Lower supply will be the result from a price cap on Russian oil,” Novak added.

WTI, which hit a session low of $75.30 on Monday, marking a bottom since January, recovered most of their losses by midday, responding to the remarks by Abdulaziz and Novak. The U.S. crude benchmark settled at $79.73 a barrel, down 35 cents, 0.4%.

Sunil Kumar Dixit, chief technical strategist at SKCharting.com, said oversold conditions could push WTI back towards the 100-week Simple Moving Average of $81.30. “But it has to get to and close above $80. Otherwise, there’s always the danger if it moving towards lows of $72.50 and $71.”

“It’s interesting the coordinated response we’ve got from the Saudis and the Russians in denying the WSJ report and putting a floor under the oil selloff,” said John Kilduff, founding partner at New York energy hedge fund Again Capital. “There’s another two weeks to the OPEC+ meeting and they’ve decided there’s too much at risk on the price front if they keep mum till then.”

Crude prices also entered briefly on Friday into a “contango” mode — a market structure that defines weakness — for the first time since 2021. Under this dynamic, the front-month oil contract in the futures market trades at a discount to the nearby month. While the difference itself might be small, it forces buyers wishing to hold a position in oil at the time of contract expiry to pay more to switch to a new front-month contract.

With such negativity in crude now, all eyes are on what the OPEC+ alliance of oil producers will do when it meets on Dec. 4.

OPEC+ — the alliance that bands OPEC, or the 13-member Saudi-led Organization of the Petroleum Exporting Countries, with 10 other oil producers steered by Russia — agreed at its prior meeting to slash production by 2M barrels per day in order to boost Brent and U.S. crude prices that had fallen sharply from March highs.

Right after that OPEC+ decision, Brent went from a low of around $82 a barrel to almost $100 within days (it had hit almost $140 earlier in March). WTI rose from $76 to $96 (WTI was at just over $130 in March). Both benchmarks have lost all those gains in the past two weeks, raising questions on whether OPEC+ will go for even more cuts to prop the market up again.

Abdulaziz’s remarks on Monday signaled the likelihood of further cuts, especially when he said the alliance will be “ready to intervene” if there’s a need to “take further measures by reducing production to balance supply and demand”.

OPEC+’s 2M-barrel cut itself has not sat well with the United States.

Saudi-U.S. relations have hit a low point over oil-production disagreements this year, though WSJ reported on Monday that U.S. officials had been looking to the Dec. 4 OPEC+ meeting with some hope.

Talk of a production increase emerged after the Biden administration told a federal court judge that Saudi Crown Prince Mohammed bin Salman should have sovereign immunity from a U.S. federal lawsuit related to the brutal killing of Saudi journalist Jamal Khashoggi. The immunity decision amounted to a concession to Mohammed, bolstering his standing as the kingdom’s de facto ruler after the Biden administration tried for months to isolate him.

The WSJ acknowledged in its report that it would be an unusual time for OPEC+ to consider a production increase, with global oil prices falling more than 10% since the first week of November itself on a rash of Covid headlines out of China.

Rising coronavirus cases in China invited new lockdown measures in some of the country’s biggest cities, drumming up concerns over slowing crude demand in the world’s largest oil importer. The country is currently struggling with its worst COVID outbreak since April, which had seen several cities placed under lockdown. A report earlier this month said that several Chinese refiners asked Saudi Aramco (TADAWUL:) to supply lower amounts of oil in December, which could point to slowing oil shipments to the country. China has also ramped up its refined fuel export quotas, potentially indicating a surplus in crude stockpiles due to waning demand.

Even so, some delegates to the OPEC+ apparently told WSJ that a production increase could take place in December in response to expectations that oil consumption typically rises in the winter. Oil demand is expected to increase by 1.69M barrels a day to 101.3M barrels a day by the first quarter next year, compared with the average level in 2022.

Saudi energy minister Abdulaziz has also said in the past the kingdom would supply oil to ‘all who need it.’

Boeing Shares Rise on News a 737 MAX Flight Lands in China By Investing.com