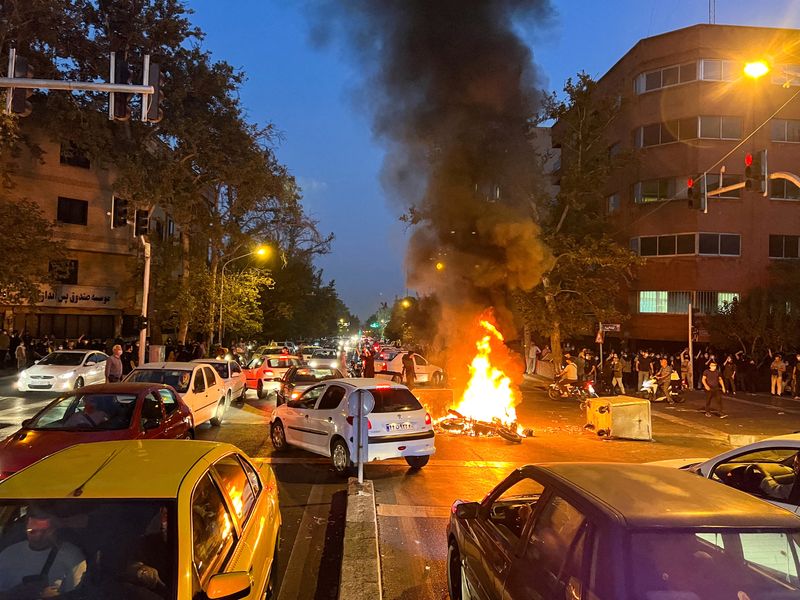 © Reuters. FILE PHOTO: A police motorcycle burns during a protest over the death of Mahsa Amini, a woman who died after being arrested by the Islamic republic’s “morality police”, in Tehran, Iran September 19, 2022. WANA (West Asia News Agency) via REUTERS

DUBAI (Reuters) -Protests in Iran entered a more violent phase on Sunday as students, who defied an ultimatum by the Revolutionary Guards and a warning from the president, were met with tear gas and gunfire from security forces, social media videos showed.

The confrontations at dozens of universities prompted the threat of a tougher crackdown in a seventh week of demonstrations sparked by the death of 22-year-old Mahsa Amini after she was arrested by the morality police for attire deemed inappropriate.

“Security is the red line of the Islamic Republic, and we will not allow the enemy to implement in any way its plans to undermine this valuable national asset,” hardline President Ebrahim Raisi said, according to state media.

Iranians from all walks of life have taken to the streets since Amini’s death in protests that the clerical rulers said were endangering the Islamic Republic’s security.

Authorities have accused Islamic Iran’s arch-enemies the United States and Israel and their local agents of being behind the unrest to destabilise the country.

What began as outrage over Amini’s death on Sept. 16 has evolved into one of the toughest challenges to clerical rulers since the 1979 revolution, with some protesters calling for the death of Supreme Leader Ayatollah Ali Khamenei.

The top commander of Iran’s Revolutionary Guards told protesters that Saturday would be their last day of taking to the streets, the harshest warning yet by Iranian authorities.

Nevertheless, videos on social media, unverifiable by Reuters, showed confrontations between students and riot police and Basij forces on Sunday at universities all over Iran.

One video showed a member of Basij forces firing a gun at close range at students protesting at a branch of Azad University in Tehran. Gunshots were also heard in a video shared by rights group HENGAW from protests at the University of Kurdistan in Sanandaj.

Videos from universities in some other cities also showed Basij forces opening fire at students.

Across the country, security forces tried to block students inside university buildings, firing tear gas and beating protesters with sticks. The students, who appeared to be unarmed, pushed back, with some chanting “dishonoured Basij get lost” and “Death to Khamenei”.

Social media reported arrests of at least a dozen doctors, journalists and artists since Saturday. The activist HRANA news agency said 283 protesters had been killed in the unrest as of Saturday including 44 minors. Some 34 members of the security forces were also killed.

The Guards and its affiliated Basij force have crushed dissent in the past. They said on Sunday, “seditionists” were insulting them at universities and in the streets, and warned they may use more force if the anti-government unrest continued.

“So far, Basijis have shown restraint and they have been patient,” the head of the Revolutionary Guards in the Khorasan Junubi province, Brigadier General Mohammadreza Mahdavi, was quoted as saying by state news agency IRNA.

“But it will get out of our control if the situation continues.”

More than 300 Iranian journalists demanded the release of two colleagues jailed for their coverage of Amini in a statement published by the Iranian Etemad and other newspapers on Sunday.

Niloofar Hamedi took a photo of Amini’s parents hugging each other in a Tehran hospital where their daughter was lying in a coma.

The image, which Hamedi posted on Twitter, was the first signal to the world that all was not well with Amini, who had been detained three days earlier by Iran’s morality police for what they deemed inappropriate dress.

Elaheh Mohammadi covered Amini’s funeral in her Kurdish hometown Saqez, where the protests began. A joint statement released by Iran’s intelligence ministry and the intelligence organisation of the Revolutionary Guards on Friday had accused Hamedi and Mohammadi of being CIA foreign agents.

Students and women have played a prominent role in the unrest, burning their veils as crowds call for the fall of the Islamic Republic, which came to power in 1979.

An official said on Sunday the establishment had no plan to retreat from compulsory veiling but should be “wise” about enforcement.

“Removing the veil is against our law and this headquarters will not retreat from its position,” Ali Khanmohammadi, the spokesman of Iran’s headquarters for Promoting Virtue and Preventing Vice told the Khabaronline website.

“However, our actions should be wise to avoid giving enemies a pretext to use it against us.”

In a further apparent effort to defuse the situation, Parliament Speaker Mohammad Baqer Qalibaf said people were right to call for reform and their demands would be met if they distanced themselves from the “criminals” taking to the streets.

“We consider the protests to be not only correct and the cause of progress, but we also believe that these social movements will change policies and decisions, provided that they are separated from violent people, criminals and separatists,” he said, using terms officials typically use for the protesters.

Stablecoin HUSD Continues to Trade Below $1 Parity as Token Taps an All-Time Low at $0.72 – Bitcoin News