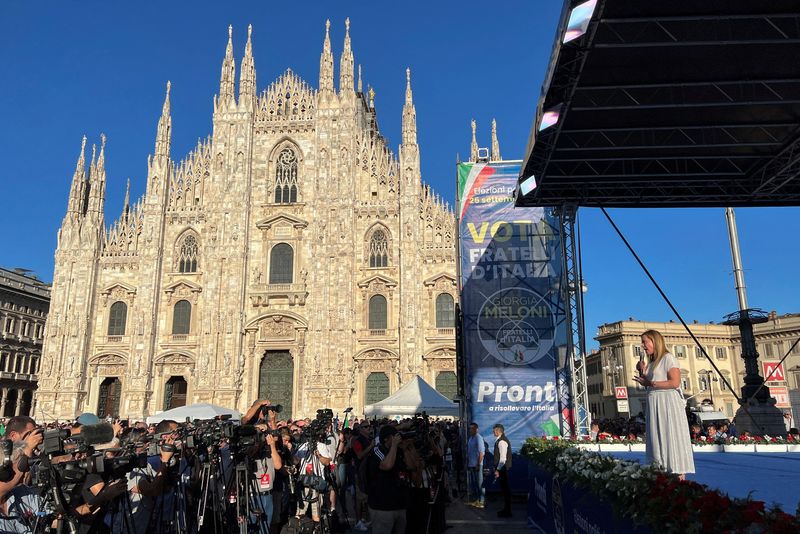 ROME (Reuters) – A senior economic adviser to Giorgia Meloni, the front runner to become Italy’s next prime minister, called for the Treasury to be split into two in order to create a separate ministry managing tax policies and fiscal reform.

Maurizio Leo, in charge of economics and fiscal policies in Meloni’s nationalist Brothers of Italy party, told Reuters “the time was ripe for unbundling” the Treasury.

The ministry currently manages public expenditure, revenue and borrowing policies. It also plays a key role in strategic choices of state-controlled groups including energy companies Eni and Enel (BIT:). Some critics say this concentrates too much power in a single structure.

“Fiscal reform is a key goal in Meloni’s programme and it requires political leadership,” Leo said, arguing for a separate body to oversee tax and revenues.

“It makes sense to keep spending and borrowing policies together,” he added cautioning that party leaders in the rightist alliance that is on course for victory in the Sept. 25 election would make a final decision.

Advocates of a unified Treasury argue that it is better to keep revenue and spending under one roof to maintain a single economic planning centre.

The functions remained separate in Italy until early 2001. A centre-right government headed by Silvio Berlusconi won the election that year and the unified ministry was assigned to Giulio Tremonti, who currently is running for a parliamentary seat with Brothers of Italy.

Meloni’s party plans to announce a first multi-billion euro tax-cutting scheme by the end of the year, if, as expected, the rightist bloc wins the election.

The same tax rate would be extended to all taxpayers for any increase in income compared with the previous three years.

With Meloni saying debt-laden Italy should use extra borrowing only as a last resort, the package would be funded by compensatory measures to avoid it weighing on the public deficit.

Leo said his party planned to fund the measures through revenues stemming from tax amnesties aimed at settling ongoing disputes and by cutting up to 50% of almost 9 billion euros earmarked in 2023 for a “citizens’ wage” poverty relief scheme.

“We think that the total resources for such a measure can be reduced by one third or halved,” Leo said.

In the future, Brothers of Italy plans to gradually simplify the income tax system by reducing the current rates from four to two and to achieve a single rate by 2027.

“As the tax reform goes into full swing, we will work on structural compensatory measures. We will selectively intervene on existing tax breaks which are currently worth around 70 billion euros,” he said.

Walmart now lets you virtually model clothing on your own body