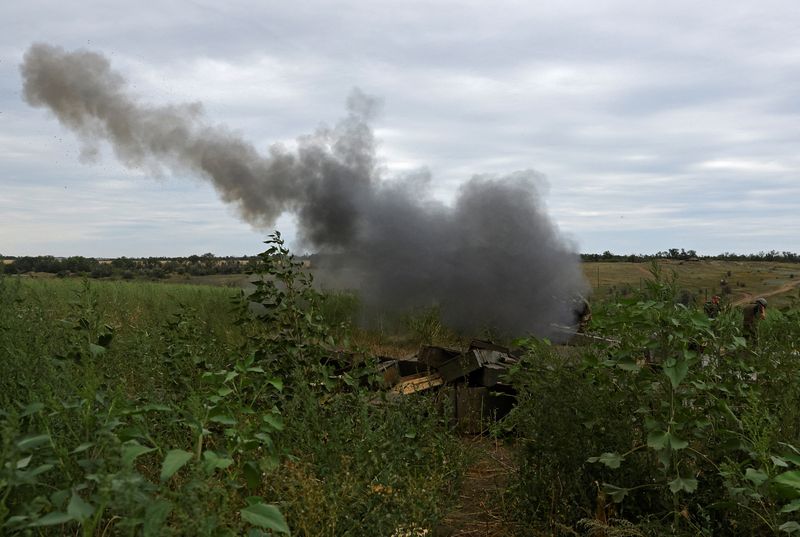 © Reuters. FILE PHOTO: Service members of the self-proclaimed Luhansk People’s Republic fire a 2A65 Msta-B howitzer in the direction of Soledar during Ukraine-Russia conflict in the Luhansk Region, Ukraine August 13, 2022. REUTERS/Alexander Ermochenko

LONDON (Reuters) – At least seven people were killed and more than a dozen wounded on Friday, separatist officials said, in attacks on three different areas of Ukraine occupied by Russian forces.

Separatists blamed Kyiv for the spate of killings – an alleged bomb blast, missile strike and double murder – and said Ukraine was waging a campaign of terrorism and “bloody crimes” behind the frontlines in territory controlled by Russian and Russian-backed forces.

In the city of Luhansk, a bomb killed the prosecutor-general of the Russian-backed self-proclaimed Luhansk People’s Republic (LPR), Sergei Gorenko, and his deputy, Ekaterina Steglenko, at their offices, Russian-appointed LPR administrator Leonid Pasechnik said on the Telegram messaging app.

He blamed Kyiv for the attack and called Ukraine a “terrorist state” under its current leadership.

Mykhailo Podolyak, a senior adviser to Ukrainian President Volodymyr Zelenskiy, tweeted that the deaths of Gorenko and Steglenko were either the result of organised crime or a Russian purge of witnesses to “war crimes” in the area.

Ukraine has previously said it will target “collaborators” who work for or with Russian-installed administrations in towns and regions seized by Russian forces either before or since Moscow’s large-scale invasion in February.

In southern Ukraine, Russian-installed officials said two local officials had been killed overnight in a “double murder”, which they also blamed on Ukraine.

Oleg Boyko, deputy head of the administration of the port town of Berdiansk, and his wife, Lyudmilla, who headed a commission preparing a referendum on the Zaporizhzhia province joining Russia, were killed in their garage overnight on Friday, the city administration said.

There were no details on the circumstances of the deaths and Reuters was unable to verify the reports.

Yevgeny Balitsky, head of the Russian-installed administration in the occupied parts of Zaporizhzia province, said in a statement addressed to Kyiv that the perpetrators were “vile cowards with the blood of innocent people on your hands”.

A third attack – a missile strike on the local government headquarters in Russian-occupied Kherson in southern Ukraine – destroyed a wing of the building, killing three people and wounding 13, the Russian state-owned news agency RIA reported, citing the local Russian-installed administration.

There was no immediate comment from Kyiv on the Kherson attack or the Berdiansk killings.

Moscow says that what it calls a “special military operation” was necessary to prevent Ukraine being used as a platform for Western aggression, and to defend Russian-speakers. Kyiv and its Western allies dismiss these arguments as baseless pretexts for an imperial-style war of aggression.

Hollow Knight: Silksong is coming to PlayStation, too