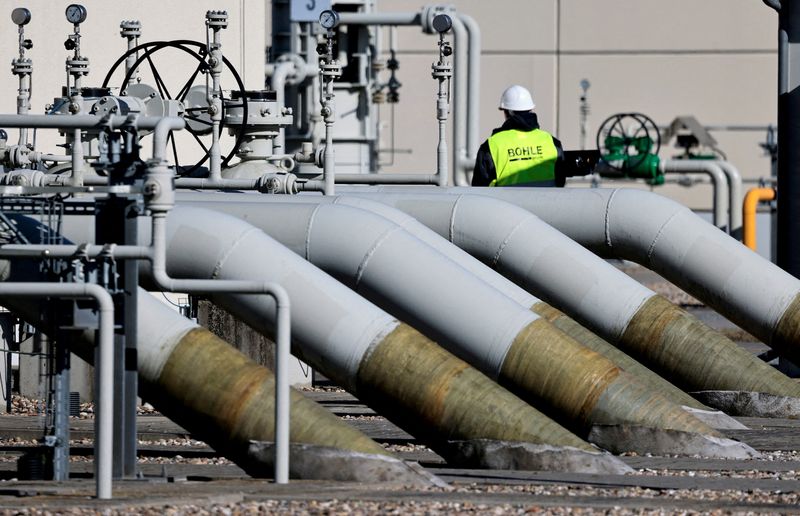 MOSCOW (Reuters) -Russia’s Gazprom (MCX:) said on Saturday that Siemens Energy is ready to help repair broken equipment for the Nord Stream 1 gas pipeline, but there was nowhere available for them to carry out the work.

In a statement, Gazprom said Siemens Energy was taking part in repair work in accordance with an existing contract between the two companies and was ready to fix faults which Gazprom said had forced it to halt gas supply to Germany through the pipeline.

On Friday evening Gazprom said it had detected an oil leak in a turbine and would not resume gas supply to Germany via Nord Stream 1 until it had been fixed. It said the repairs can only be carried out at a specially fitted workshop.

“Siemens is taking part in repair work in accordance with the current contract, is detecting malfunctions … and is ready to fix the oil leaks. Only there is nowhere to do the repair,” Gazprom said in a statement on its Telegram channel.

Flows through Nord Stream 1 were due to resume early on Saturday morning. But hours before it was set to start pumping gas, Gazprom published a photo on Friday of what it said was an oil leak on a piece of Nord Stream 1 equipment.

Siemens Energy, which supplies and maintains equipment at Nord Stream 1’s Portovaya compressor station said on Friday the leak did not constitute a technical reason to stop gas flows, adding it could be sealed on site and was “within the scope of routine maintenance work.”

Europe has accused Russia of using gas supplies as a weapon in what Moscow has called an “economic war” with the West over the fallout from Russia’s military campaign in Ukraine.

The Kremlin has blamed Western sanctions for disrupting Nord Stream 1 and putting barriers in the way of routine maintenance work. Western officials have rejected this claim and Siemens Energy said sanctions do not prohibit maintenance.

Before the latest round of maintenance, Gazprom had already cut flows to just 20% of the pipeline’s capacity.