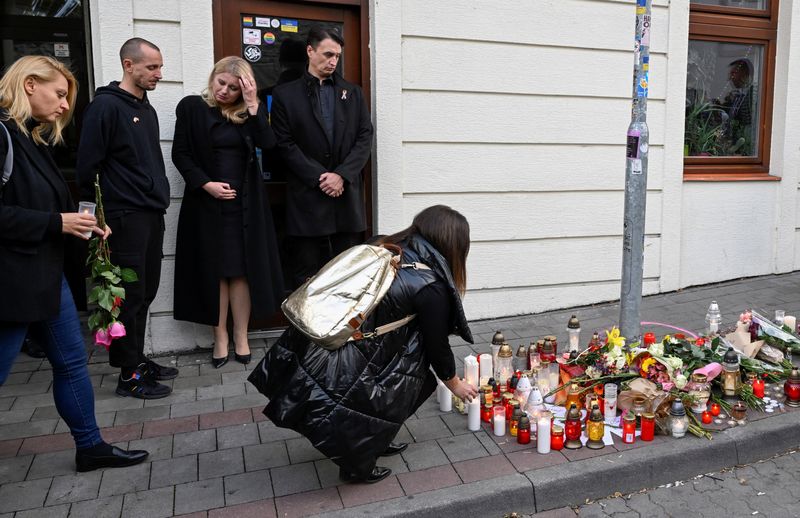 © Reuters. Slovakia’s President Zuzana Caputova stands next to her partner Juraj Rizman and the owner of a gay bar as a person lays a tribute at the site of a shooting in Bratislava, Slovakia October 13, 2022. REUTERS/Radovan Stoklasa

By Robert Muller and Jason Hovet

(Reuters) -Slovakia could treat the killing of two people outside a well-known gay bar in the capital Bratislava as an act of terrorism, a top prosecutor said on Friday, as investigators looked deeper into the shooting which has rattled the central European state.

The killings, investigated as a possible hate crime although police have yet to determine its motives, have sparked outrage from politicians and rights groups, and prompted the president to call for reflection on the political climate in the country.

Thousands gathered in downtown Bratislava later on Friday to show solidarity with the LGBT community, many waving the rainbow flags symbolising the movement for gay rights or carrying banners like “Stop the violence!”.

Police found the suspected killer dead on Thursday morning, after he shot his victims outside the Teplaren bar in the city centre on Wednesday evening. Police said they suspected the shooter then killed himself.

Prime Minister Eduard Heger has called the shooter a “radicalised teenager”, while President Zuzana Caputova said in a Facebook (NASDAQ:) post the shooting was a hate crime.

On Friday, police and judicial officials said investigations so far showed no indications the killer knew his victims.

Police on Friday identified those killed as 23-year-old Matus H. and 26-year-old Juraj V. A third victim, Radoslava T., 28, was wounded in her leg.

Police said the suspected killer was 19-year-old Juraj K. who had used a gun with a laser sight, registered to a relative.

Slovak media reported the suspect had posted messages with the phrases “hate crime” and “gay bar” hashtagged on Twitter, and he had posted a manifesto against the LGBT and Jewish communities before the killings.

Special Prosecutor Daniel Lipsic said the manifesto and more evidence were being examined.

“The suspicion is that the motive of this act was to destabilise society,” he told a televised briefing. “These points lead us to the possible consideration that we could classify this criminal offence as an act of terrorism.”

Several officials, including Heger and Caputova, joined the solidarity march in Bratislava.

“A couple days ago, hatred deliberately hit straight at our hearts, it hit us all, because it hit very important values,” Caputova told the gathering.

Shortly after the shooting, Caputova accused unspecified politicians of “filling the space with hate”. Her critique comes as far-right parties have made gains in recent years.

The finance minister relied on lawmakers from a far-right opposition party in June to push through a bill aimed at helping people hit by high energy prices. That vote sparked a row in the ruling coalition that led a junior party to quit last month, leaving the government with a minority in parliament.