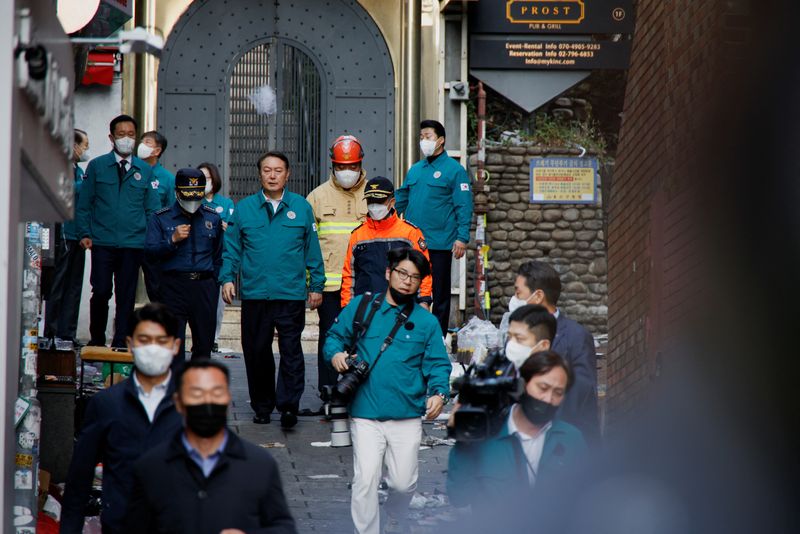 © Reuters. South Korean President Yoon Suk-yeol walks at the scene where many people died and were injured in a stampede during a Halloween festival in Seoul, South Korea, October 30, 2022. REUTERS/ Heo Ran

By Soo-hyang Choi and Hyonhee Shin

SEOUL (Reuters) -South Korea moved to calm public outrage on Tuesday over a Halloween party crush that killed more than 150 people, most of them young, promising a speedy and intensive inquiry and calling for tough new safety measures to prevent similar disasters.

The death toll from the crush at a crowded Halloween street party on Saturday climbed to 156 with 151 injured, 29 of whom were in serious condition. At least 26 citizens from 14 countries were among the dead.

Tens of thousands of revellers – many in their teens and twenties and dressed in costume – had crowded into narrow streets and alleyways of the popular Itaewon district for the first virtually unrestricted Halloween festivities in three years.

The country’s chief security officer, Interior Minister Lee Sang-min, apologised on Tuesday, vowing to find out the cause of the incident and prevent similar cases from recurring.

“As the minister overseeing the safety of the public, I express sincere apologies over the incident,” Lee said, adding that the government had “limitless responsibility over the safety of our people” as he addressed a parliamentary session televised live.

He has come under sharp public criticism after saying that deploying more police would not have prevented the disaster.

Seoul Mayor Oh Se-hoon also tearfully apologised during a media briefing and said the city government would put all available administrative resources “until every citizen can return to their normal lives”.

National Police Commissioner General Yoon Hee-keun earlier on Tuesday acknowledged crowd control at the scene was “inadequate,” noting that police had received multiple reports warning of possible accidents on the night of the disaster.

“The police will speedily and rigorously conduct intensive inspections and investigation on all aspects without exception to explain the truth of this accident,” Yoon told a news conference.

Prime Minister Han Duck-soo said the ongoing investigation would cover whether government agencies’ on-site responses were adequate. He pointed to inadequate institutional measures for crowd management as a cause of the deadly surge.

President Yoon Suk-yeol has declared a week of national mourning, saying the country had too many safety disasters. He said better responses were critical, including improved crowd control.

“We should come up with concrete safety measures to manage crowds, not only on these streets where this massive disaster took place but at other places like stadiums and concert venues where large crowds gather,” he said at a cabinet meeting.

All the victims have been identified and memorial altars have been set up at the Seoul city hall and in the Itaewon district, where citizens paid their respects.