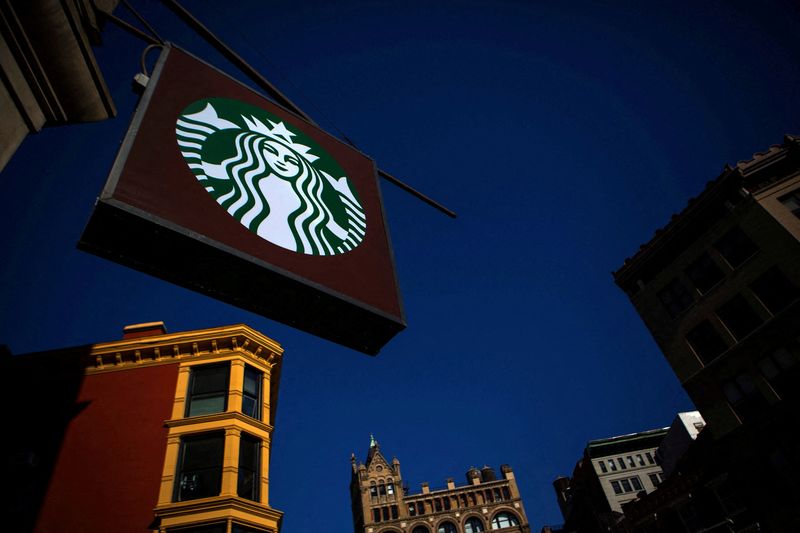 By Hilary Russ and Jessica DiNapoli

But the 10-year consumer-company veteran didn’t say what steps if any he would take to address a growing union movement, or help the coffee chain reach ambitious sales targets as it overhauls its cafes.

Starbucks shares are roughly flat at $84.58 from Sept. 1, when Starbucks announced Narasimhan’s appointment. Investors who spoke with Reuters ahead of its quarterly results Thursday said they hope to hear specifics on his approach on the union and overall business goals, although he is not expected to speak. He takes over as CEO on April 1.

Starbucks last month said it aimed to deliver 7% to 9% sales growth globally through 2025, despite intense competition from rivals, including Dutch Brothers and McDonald’s Corp (NYSE:).

Employees in at least 250 U.S. corporate-owned locations voted to unionize in the last year after campaigning for better working conditions. Outgoing Chief Executive Officer Howard Schultz responded by calling the unions a “third party” and saying the company is “in a battle for the hearts and minds of our people.”

Jake Dollarhide, co-founder of Longbow Asset Management, told Reuters he is not bothered by the tensions around the union. “I want to maximize shareholder value,” he said.

Dollarhide, some of whose clients own Starbucks shares, wants to see Narasimhan expand Starbucks’ canned and bottled drinks business, pushing products such as $3.38 Nitro cold brew and $2.98 Tripleshot Energy deeper into retailers, including Kroger (NYSE:) Co. In 2015 while at PepsiCo (NASDAQ:) Inc, Narasimhan championed a deal for PepsiCo to distribute Starbucks’ ready-to-drink beverages in Latin America.

Four investors whose funds embrace social causes told Reuters they hope that Narasimhan will bring a softer stance to talks with the union. That, they said, could help improve employee retention at a time when Starbucks is overhauling its cafes and needs to keep operations running smoothly.

“It would matter a lot if one of the first things he says is, ‘I went and talked to workers at our stores, heard what their concerns are involving safety, involving wages, involving healthcare,” said Christian Greiner, sub-adviser to Azzad Asset Management’s large cap growth fund, which holds a $2 million stake in the company.

Starbucks did not reply to a request for comment. The company has said previously that it is listening to and investing heavily in employees, including spending on new equipment to make coffee faster and hiking average minimum pay to nearly $17 an hour.

It has also said it respects workers’ choice to join a union and is committed to bargaining in good faith.

There is little in Narasimhan’s background or public remarks offering clues into how he will handle workers’ demands. In bargaining, which began last week in dozens of stores, baristas plan to ask for lower health insurance costs, and for reliable work schedules and more transparency before employees are fired, according to employees involved in the talks.

When Narasimhan headed PepsiCo in Latin America from 2015 to 2019, workers at a Guatemala Frito Lay factory formed an independent union, with nearly 900 of its 1,300 employees, according to union representatives in Guatemala, a relatively small market for the company. PepsiCo at first did not recognize that union but signed a three-year agreement with it in 2018.

Starbucks’ board first scouted Narasimhan as a potential successor to former CEO Kevin Johnson before Johnson’s retirement in March – and before workers filed for union recognition, two sources familiar with the matter told Reuters.

Jonas Kron, Chief Advocacy Officer at Trillium Asset Management, which holds about $48 million of Starbucks shares, said Narasimhan has “room to maneuver where Schultz did not” because he “has not tied his own personal identity or his professional reputation to this hostility to unions the way Schultz has.”

Currently, Schultz’s stance is “dividing the workforce,” said Dieter Waizenegger, executive director at the SOC Investment Group, which works with union pensions that hold about $156.6 million of Starbucks shares.

Kron and three other investors filed a shareholder proposal last month asking the Starbucks board to hire an independent third party to assess its adherence to labor standards in its 2020 Global Human Rights Statement.

What time do Black Friday deals start at Amazon, Walmart, and other retailers?

16 Children’s Books About Death for All Ages