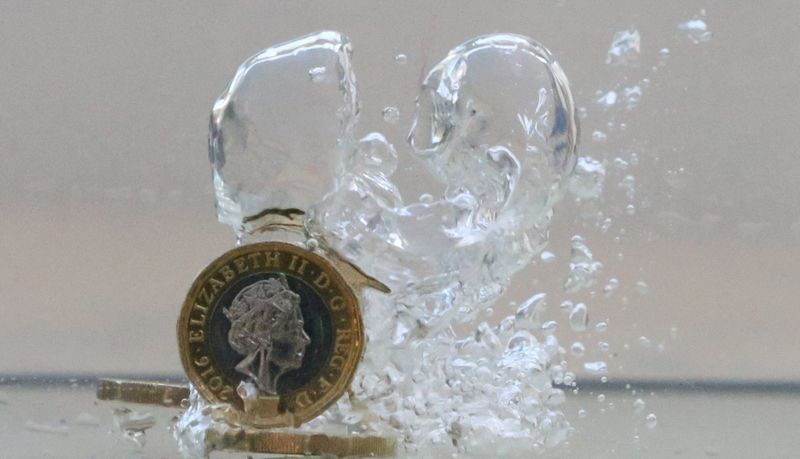 LONDON (Reuters) – The Bank of England has the uneviable task of convincing markets they are wrong about how high UK interest rates need to rise, without pulling the rug from under sterling again in the process.

In all the chaos of UK government decision-making and political leadership over the past month, the BoE was initially sidelined and then handed a mop to clean up the mess.

Given the detritus, it’s done well to at least partly clean up shredded financial market confidence and restore a semblance of credibility to policymaking.

Its fortnight of intervention to contain shockwaves that hit UK sovereign bonds and affected pension funds – all clearly triggered by Sept 23’s unfunded tax-slashing ‘mini budget’ – has helped markets stabilise on their own since Monday.

Ten- and 30-year gilt yields that benchmark long-term borrowing for the country have given back about a half and two-thirds of the respective jumps from just before Sept 23 – albeit at the signifcant cost of tens of billions of additional BoE bond purchases that it now somehow has to sell back into the market again over the coming months.

The additional risk premium on conventional 10-year UK bonds over German and U.S. equivalents is still about a quarter to a half a percentage point compared to last month.

But even after the shape-shifting government reversed most of its controversial fiscal plans and Prime Minister Liz Truss resigned on Thursday, the BoE has yet to defuse panic over just how high it needs to hike policy rates to cut across inflation expectations aggravated by the crisis.

BoE Deputy Governor Ben Broadbent kicked off the process on Thursday by telling markets that meeting their expectations may amount to overkill in a weakening economy.

“Whether official interest rates have to rise by quite as much as currently priced in financial markets remains to be seen,” he said. “If Bank Rate really were to reach 5.25%, given reasonable policy multipliers, the cumulative impact on GDP of the entire hiking cycle would be just under 5% – of which only around one quarter has already come through.”

Futures markets have indeed now cut the expected hike at the BoE’s Nov 3 meeting to 75 basis points from well over 100bp at the height of the shock.

But Broadbent’s concentration on the likely peak terminal rate next year is what matters most.

For context, that UK terminal rate, now pencilled in for around the middle of 2023, rocketed almost two full percentage points from just prior to the botched mini-budget to as high as 6.25%. It retraced half that move to 5.25% just before Broadbent’s speech – and ebbed a little further since.

But at 5.15%, markets still assume nearly four percentage points of UK rate increases from the current 2.25% over the next six meetings – an average of 65 bps a meeting until June. And that will hurt as hard as Broadbent outlined as variable mortgage rates and government interest costs spiral in tandem.

If the BoE is successful in talking that peak back lower towards 5% or below, then it will most likely meet the U.S. Federal Reserve’s equivalent terminal rate coming up from the other direction. Fed terminal rates, now targeted about March next year, have jumped 150 bps to 5% over the past two months.

A crossover of the two peaks would return an expected short-rate premium in favour of dollars for the first time since August, and where it was for eight months prior to that.

And Morgan Stanley (NYSE:), for example, see a UK terminal rate as low as 4% – a huge drop from current market pricing.

The big issue for the Bank is whether anxiety over broad economic policy credibility and inflation expectations dissipates sufficiently to allow it guide markets back down without disturbance – or whether investors just assume the BoE won’t have the willingness or ability to tighten enough to rein in inflation if a deep recession hits.

If it’s the latter, the pound just nosedives again and exaggerates the inflation picture into the bargain.

The stubborn refusal of terminal rate pricing to return to where it was last month reflects the extent of those jitters.

Jeffries doubt the change of PM and cabinet resolves anything in the short term. “A new government just inherits the problems that are plaguing the economy and will continue to plague the pound.”

And ING’s Christ Turner and team reckon the persistent risk premium still built in to gilts and other UK assets will be hard to shake. “The old adage, that it takes years to build confidence but only one day to destroy it, applies here.”

The opinions expressed here are those of the author, a columnist for Reuters.

Jordan Peele’s Nope is coming to Peacock next month

Thousands from rival Tunisian parties protest against president By Reuters