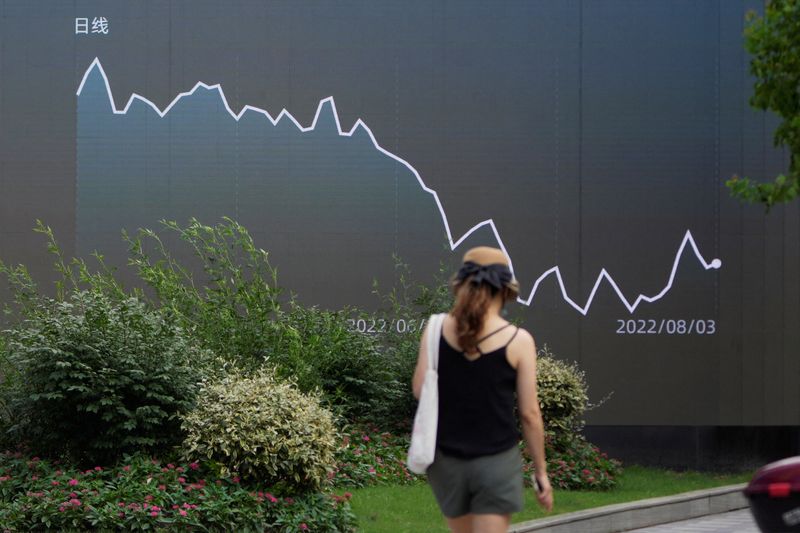 LONDON (Reuters) – European stock markets struggled to recover from recent lows on Wednesday while sterling regained some ground after hitting a 13-day low overnight as the Bank of England reiterated that it would end its emergency bond-buying at the end of the week.

Global equity markets have fallen sharply in recent sessions, hurt by heightened fears about an economic slowdown amid warnings from the International Monetary Fund and World Bank.

Asian stocks were stuck near two-year lows, weighed down by signs that China will persist with its strict COVID-19 policies.

The MSCI world equity index, which tracks shares in 47 countries, was flat on the day at 1100 GMT, holding near the previous day’s two-year low.

Europe’s index was up 0.1%, having declined in the last five consecutive sessions.

“We’ve had a really fast decline in equity markets over the last few days, obviously to do with the heightened recession fears,” said Axel Rudolph, a market analyst at IG Group.

“I think we’re seeing some short-covering and I wouldn’t be surprised if that also feeds into U.S. markets later today, whereby people position themselves more neutrally ahead of the CPI data on Thursday.”

U.S. producer price data due at 1230 GMT is expected to keep the Fed on the path of rate hikes. Consumer price data (CPI) is due on Thursday.

The British pound hit a 13-day low of $1.0925 during Asian trading hours, after Bank of England Governor Andrew Bailey said that pension funds and other investors hit by a spike in UK gilt yields had just three days left to fix their problems before the central bank ends its emergency bond-buying scheme.

But the BoE has also signalled privately to lenders that it was prepared to extend the support beyond Friday’s deadline if necessary, the Financial Times reported.

IG’s Rudolph said that the strain in UK markets – which began when the British government announced its “mini-budget” fiscal plans on Sept. 23 – is contributing to broader negative market sentiment.

“It’s just another nail in the coffin with regards to sentiment and market sentiment has really taken a hit over the last few days,” he said.

Former U.S. Treasury Secretary Larry Summers criticised the British government. “It’s very rare that I have seen such a misguided combination of policy and policy communications as the new Tory government delivered,” he said at an investment conference in Sydney.

“I would have thought that by now it was something that should be universally understood that if you are making a military intervention in a country, it is a terrible idea to announce the deadline by which you will withdraw because it just provides a roadmap for your opposition and encourages them to wait you out.”

UK gilt yields rose across a range of maturities, with 2-year yields seeing the sharpest increase.

The euro was steady at $0.9713, while euro zone government bond yields were up, tracking the weakness in the UK gilts market.

The German 10-year government bond yield rose to its highest since 2011.

The was down around 0.2%. Overnight, the dollar passed the 146-per-yen level for the first time in 24 years, prompting Tokyo authorities to pledge to step in if needed.

The minutes from the Fed’s latest policy meeting are due to be released later in the day.

The IMF’s chief economist said on Tuesday that central banks’ fight against inflation may take another two years to play out, increasing unemployment and lowering living standards for many in the world.

On Monday, the president of the World Bank and the managing director of the IMF warned of a growing risk of recession.

The war in Ukraine also weighed on market sentiment. A leak on a pipeline carrying oil from Russia to Europe added to concerns about energy security.

(This story has been corrected to say STOXX 600 has declined in the past five previous sessions, not four, in paragraph 5)

How to hide apps from your iPhone’s homescreen