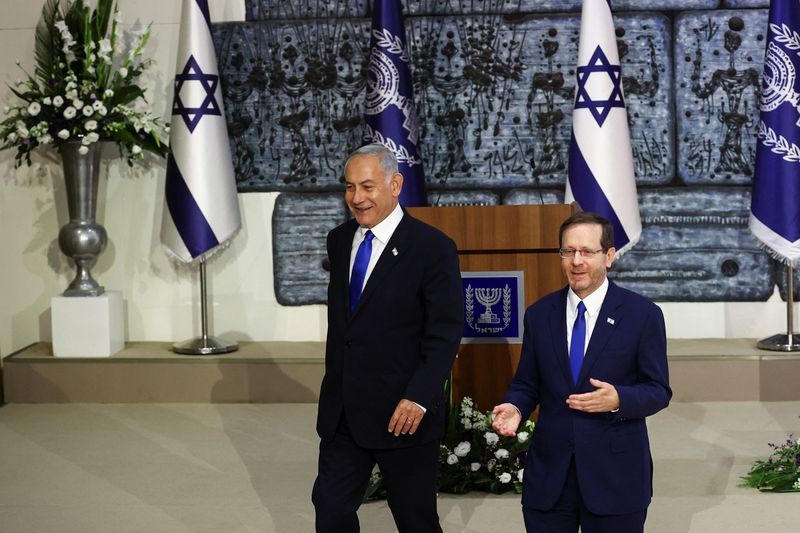 © Reuters. Israel’s President Isaac Herzog walks next to Benjamin Netanyahu during a ceremony where Herzog hands Netanyahu the mandate to form a new government following the victory of the former premier’s right-wing alliance in this month’s election at the Presiden

JERUSALEM (Reuters) -Former Israeli Prime Minister Benjamin Netanyahu received an official mandate on Sunday to form a new government and pledged that he would seek national consensus after an election in which Jewish far-rightists surged, drawing concern at home and abroad.

That puts the conservative Netanyahu on the path to one of the most stable governments in years, after an 18-month hiatus during which he was replaced by a rare but fragile alliance of centrist, liberal, nationalist and Arab politicians.

“I intend to work to broaden the zone of consensus among us,” Netanyahu said in televised remarks at Herzog’s residence, adding that he would represent all Israelis “without exception”.

He asserted that there was already widespread agreement on Israel’s Jewish identity but that individual liberties should also be upheld – an apparent allusion to its 21% Arab minority as well as secularists.

Reiterating two of his long-held convictions, he pledged further free-market reforms to lower costs of living and said: “We must determinedly take action against Iran’s belligerence and, above all, foil its effort to arm itself with nuclear weaponry, which has direct designs against our existence”.

Having forged normalisation with United Arab Emirates, Bahrain, Sudan and Morocco in 2020, Netanyahu said he would now work on “further peace deals, peace through strength, peace in exchange for peace, with additional Arab countries – and thus, to a large extent, end the Israeli-Arab conflict”.

He added: “I did not say the Israeli-Palestinian conflict, but in my opinion this is the preliminary stage that would also bring that outcome.”

U.S.-sponsored talks on founding a Palestinian state alongside Israel stalled in 2014.

The incoming government looks to be the most right-wing in Israel’s history, encompassing the ultra-nationalist Religious Zionism party whose leaders oppose Palestinian statehood, want the occupied West Bank annexed and were anti-LGBT in the past.

One of them, Itamar Ben-Gvir, was convicted in 2007 of racist incitement against Arabs and support for terrorism. He says he is now reformed but still calls for harsh crackdowns against those he deems terrorists or traitors.

Dismissing what he called “fear-mongering” about the health of Israel’s democracy, Netanyahu said the country would continue to be a “beacon” for the region.

More mainstream parties have boycotted Netanyahu’s Likud due to his corruption trial, in which he has denied wrongdoing. Herzog noted Netanyahu’s trial but said it posed no legal obstacle to him serving as prime minister again.

Netanyahu has 28 days to clinch a coalition, with a possible 14-day extension. But he looks likely to finalise the talks this week, having launched them semi-formally right after the Nov. 1 election.

CEO diversity slow to change even as U.S. boards hire more women and minorities By Reuters