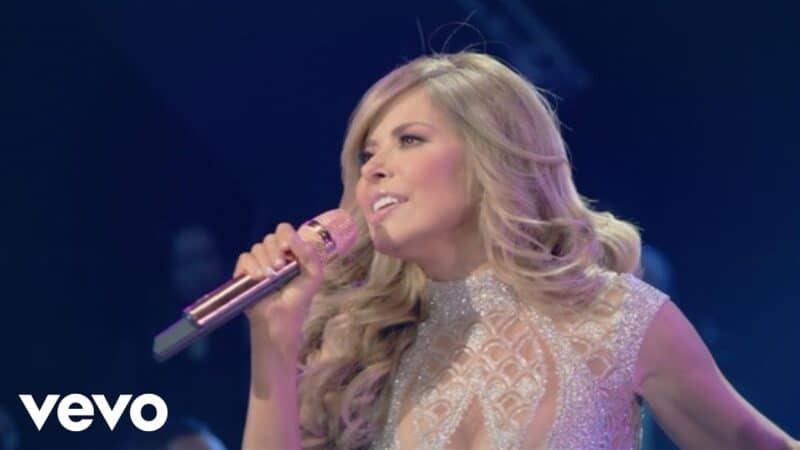 Have you ever heard of singer Gloria Trevi? She is commonly referred to as the diva of Mexican pop music and if you’ve ever seen her perform, it’s easy to see why. If you think that the only thing she does is sing, think again. It just so happens that she’s involved in virtually every aspect of this particular facet of the entertainment industry. In fact, she is also an actress and a television hostess. She doesn’t just sing her songs, but also writes her own material.

She’s also been known to produce a song or two and she’s a professional dancer. Last but not least, she directs loads of music videos. As you might have already guessed, she’s turned all of this into a tidy little business that she also runs herself. Now that you know more about who she is, it’s time to get down to business and discuss 10 of her best songs. Every one of them has a YouTube link. If you’re so inclined, take some time to listen and see if you have a new favorite. Who knows, maybe your favorite song is already listed right here.

This is essentially her take on the type of song that so many people have written over the years. It deals not only with lost love, but with the messy, uncomfortable emotions that often come in the wake of something like this. The song lyrics talk about how she refuses to accept that the relationship has come to an end. As the days wear on, she’s forced to accept that she’s no longer in this relationship, but she’s still not ready to be terribly forthcoming with the truth about what actually happened, largely because it hurts too much to do so.

She talks about love in this song too, but she takes it in yet another direction. Here, she realizes that her significant other is cheating on her with another woman. The lyrics in the song tell the story of her going to the other woman and asking her how long they’ve been together (and whether or not she knew that he was already involved). It’s a very direct song that resonates well with anyone who’s ever found themselves in such a position.

Have you ever had that one person in your life that always seemed to be there for you to help you pick up the pieces every time something else went wrong? More importantly, have you ever had a person like that in your life that you didn’t appreciate as much as you should have? This is a song about having exactly that type of person and taking them for granted. Eventually, she gets her heart broken by the person that she’s completely interested in and when she looks around, the only person there to pick up the pieces is the one that she’s basically ignored. This is a song about learning to appreciate those people in your life and giving them the respect that they’re due.

This is another song that sees the main protagonist confront someone who has been cheating with her significant other. There’s no doubt about it, any person who has ever found themselves in this situation knows how much it stings. She tells the story of that feeling in expert detail.

This is a truly heartbreaking song about a woman who has disobeyed her parents, fallen in love and eventually, became pregnant. She hides it from her parents and decides to announce that the two of them will be married, only for him to begin physically abusing her. She goes on to tell the story of living in this pit of utter loneliness because she can’t bring herself to let anyone know what’s actually going on.

You might think from the title of this song that it’s about things being very good, but that isn’t necessarily the case. As a matter of fact, the song is indeed about everything being the exact opposite. It tells the story of a young woman who has found herself in a relationship that is so terrible, even when she is directly in the midst of something overwhelmingly good, all she can taste is the bitterness of this relationship that clouds her perception of everything else in life.

This is another song about love gone wrong. It talks about losing oneself in a relationship where the other person is so controlling that the individual in question can no longer remember who they even were before this particular relationship occurred. It goes on to talk about more or less becoming a chameleon, constantly trying to change one’s self in order to please this other person. The truly heartbreaking thing is that no matter what the individual in question does, it doesn’t help. The relationship is doomed to fail no matter what happens.

As you might have guessed by now, she sings a lot of songs about love. In this particular case, you have another relationship that isn’t going well. The person in the story has tried numerous times to do her part in helping to work things out, with little or no success. Eventually, she told her significant other that she will give him five minutes to say his piece and after that, the relationship is through. She talks about how she has tried repeatedly to make things work and feels that she is the only one that has been making the effort. In short, the song is basically a stand against being pushed around and having someone else make your choices for you.

Finally, you have a song about falling head over heels in love with someone and not caring what anyone else thinks about it. The song tells a story too, one in which virtually everyone in this person’s life is telling her not to get involved with someone. Nevertheless, she falls in love with that exact individual. The song is about following one’s heart and not caring what anybody else has to say about it.

Last but not least, you have another love song that talks about two people coming to the realization that even though they love one another, they’re not necessarily good for each other. They both want to stay together, but things don’t tend to work out because they don’t bring out the best in each other. Eventually, they agree that the best thing they can do for their own well-being is let the relationship go and move on.