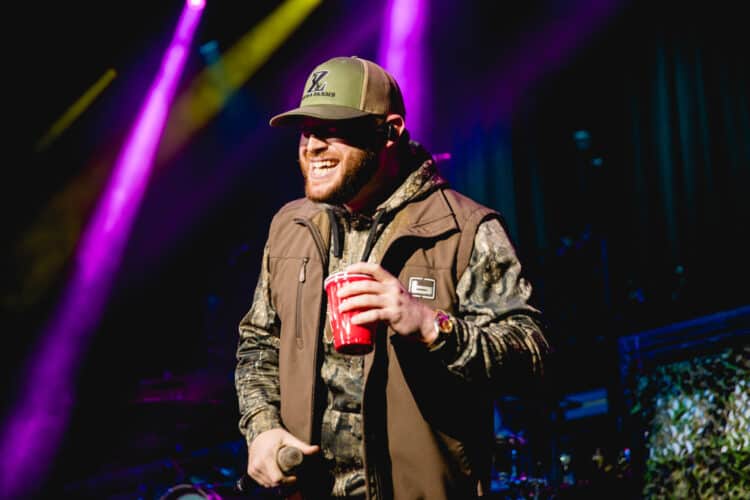 Jonathan Thomas Langston, who goes by Jon Langston, is a Loganville, Georgian-born country music singer. He began his music career in 2013 in Kennesaw, Georgia, playing Chase Rice’s opening act. During the same year, he recorded an extended play, Runnin’ on Sunshine. His breakthrough came two years after releasing the Showtime extended play (EP) courtesy of Treehouse Records. It didn’t take long before it found its way on the Billboard magazine charts, peaking at 26 on the Top Country Albums chart and top 30 on two other charts. Since then, he’s become a darling to many fans thanks to his live performances. Here are the ten best songs he’s released over the years.

Jon Langston co-wrote “Right Girl Wrong Time” alongside Jordan Ragger and Cole Taylor. He sings about meeting a girl, and they instantly feel a strong connection. However, they were worlds apart, and as you know, sustaining a long-distance relationship can be stressful. He keeps mentioning that they were meant to be, but the timing was wrong. He finishes by saying that no amount of distance can separate people in love.

“Love While It Lasted” by Langston is a love letter describing memorable events that two lovers shared. Langston sings about driving in the streets of Tennessee, saying everything about it reminds him of her. However, he knows it’s highly unlikely to take back the hands of time. So, he closes the song by saying it was “love while it lasted.” This song is featured on Showtime EP courtesy of Treehouse Label. The EP peaked at 26 on the US Billboard Top Country Songs, 22 on the US Indie charts, and eight on the US Heat songs. Also, it’s one of the anthemic singles Langston performs at his live shows.

In 2020, Langston released “Drinks” courtesy of Entertainment/EMI Records. The songs penners were Langston, Jaren Mullins, and Matt Alderman. The ballad describes feelings of heartbreak and longing after the end of a relationship. It has been Langston’s anthemic song in live shows after his EP, Now You Know, which peaked a 36 on the charts. Since then, Langston’s catalog has risen to more than 500 million streams.

“Prob’ly at a Bar” is Langston’s single that never made it to the charts, though critics say he did a tremendous job. The following year, he was signed to UMG Nashville imprint EMI Records Nashville and 32 Bridge Entertainment. The record label’s founder, Luke Bryan, asked him to hop onboard following two successful releases that peaked on Hot Country Songs that year.

2016 was when Langston was featured in a single, “Yung and Dum,” by American metalcore band issues. He also recorded the single “All Eyes on Us” the same year, but it didn’t reach the charts. The song describes a man feeling like he’s on top of the world, thanks to a sophisticated girl he was dating. It’s unclear who he was referring to, but it’s a piece of excellent country music depicting a man with a high sense of grandiose.

“Beers Got Drank” is Langston’s track, penned by Langston, Rhett Atkins, Dan Isbell, and Jacob Rice. Jody Stevens produced it. In one of his interviews, Langston admitted that it was a while since he released an anthemic song. He hopes his fans will enjoy this song, particularly during summer. The single was also recorded by 32 Bridge Entertainment/EMI Records in Nashville.

“If You Want My Love” is an emotionally powered rendition of Langston’s “Back Words,” It spun on the Country airwaves by May 2022. The singer once shared on his Instagram account that he was a huge fan of NF. So, getting a chance to release his version of a song so endearing to him was something he never expected. Entertainment / EMI Records recorded the song.

Back in 2015, no record deal was signed by Langston yet. However, that didn’t prevent him from finding success with his single, “Forever Girl,” plus its video. So, the singer featured it on his self-titled EP, released that year. Luckily, his project rose to number three on iTunes and held the top ten for subsequent weeks. Spotify recorded more than two million streams after the footsteps of the previous online successes, Showtime, She’s So Georgia, and Runnin’ in Sunshine.

“Back Words” is one of the most recent of Jon Langston’s singles. It was written by Ross Copperman, Michael Hardy, and Jon Nite. On February 25th, he did his All Good Out There Tour in Gainesville, Florida. The singer uses his song to reflect the “goodbye” he said, though he admits that he can’t take “back words.”

Langston’s childhood life in Loganville, GA, made him look up to music heroes Alan Jackson and the Eagles. At first, his passion was football, and he earned a division 1 college football scholarship. But after sustaining a head concussion that left him blind for fifteen minutes, he realized that pursuing sports was pointless. Eventually, he ditched football for music and has never regretted his bold decision. His song “When It Comes to Loving You” talks about how he loves watching football with his granddad. He even mentions enjoying a beer on a Friday night after work. However, he doesn’t feel fulfilled knowing he’s not near his lover. All he wants is to be with her at all times. The song hit radio airwaves, peaking at No. 1 on the genre iTunes Charts.

10 Awesome Songs with “Remember” in the Title