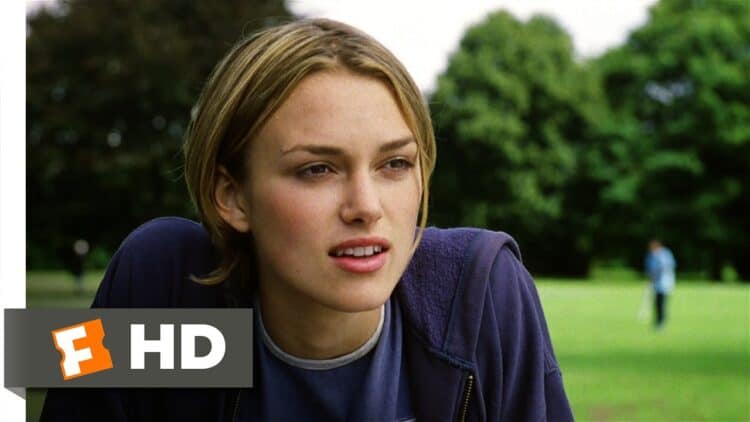 ‘Bend It Like Beckham’ is a 2002 British sports comedy film directed by Gurinder Chadha, who also co-wrote the screenplay with Paul Mayeda Berges and Guljit Bindra. The film stars Parminder Nagra, Keira Knightley, Anupam Kher, Jonathan Rhys Myers, Archie Panjabi, Juliet Stevenson, and Shaznay Lewis. It is about a British Indian Sikh girl who is passionate about football, but her parents forbid her to play. Her parents disapprove and forbid her to play, but she goes behind her parents’ backs. She befriends another girl who plays football for a local women’s team, and they start playing matches together. Other than the storyline, the film was noted for its sports action. Another element of the movie that contributed to viewers’ enjoyment of watching the movie was its soundtrack. Here are the 10 best songs from the ‘Bend It Like Beckham’ soundtrack ranked.

In addition to popular songs by western artists, the soundtrack for ‘Bend It Like Beckham’ also features music by Hindi and Gujarati artists. One of the best examples is ‘Hot, Hot, Hot,’ which was recorded by UK-based Hindi/Gujarati artist Bina Mistry.

In the scene where Jess, Jules, and Joe are dancing in the nightclub, the song playing is ‘I Turn to You.’ It was recorded by former Spice Girls member Melanie C, also known as Sporty Spice, and it was included on her album ‘Northern Star.’ Melanie C also contributed the song ‘Independence Day’ to the soundtrack. She is not the only member of the girl band to have contributed to the ‘Bend It Like Beckham’ soundtrack, as Victoria Beckham, also known as Posh Spice, also contributed two songs.

According to Tune Find, the song playing in ‘Bend It Like Beckham’ when Jess finds out she can be an advocate is ‘Dream the Dream.’ The song is performed by Shaznay Lewis, a former member of the girl group All Saints, and it was her debut single as a solo artist.

Victoria Beckham’s song ‘I Wish’ was recorded in 2021 and included in her self-titled debut album, which is her only album to date. Originally, it was intended that ‘I Wish’ would be the third song released from the album, but Beckham’s second pregnancy meant she decided to shelve the single’s release. Despite not being released as a single, the song featured in the soundtrack of the film, which is named for the singer’s football player husband. Victoria Beckham also contributed the song ‘I.O.U’ to the soundtrack.

‘She’s a Lady’ is a song written by Paul Anka, and he recorded it in 1969. The song was included on his self-titled album the following year. Although Anka wrote the song and was the first to record it. The best-known version of the song was recorded by Welsh singer Tom Jones in 1971. Not only was it Jones’ highest-charting hit in the United States, but it was also his final Top Ten hit on the Billboard Hot 100 in the United States.

‘Nessun Dorma’ is an aria from the final act of the opera ‘Turandot’ by Giacomo Puccini. Many opera singers have performed the aria, and the most famous version is probably by Luciano Pavorotti, who performed the song for the 1990 World Cup. The version in the ‘Bend It Like Beckham’ soundtrack is performed by Tito Beltran and The City of Prague Philharmonic Orchestra.

Curtis Mayfield first recorded ‘Move On Up’ in 1970 for his album ‘Curtis.’ The original version was nine minutes long, and it failed to chart when he released it as a single. Mayfield edited the song and released a shorter version of the track the following year, and it spent 15 weeks in the Top 50 of the UK Singles Chart.

British electronic pop duo Basement Jaxx released their second album ‘Rooty’ in 2001, and one of the tracks featuring on the album was ‘Do Your Thing.’ The song was released as a single the following year, then rereleased in 2005. It has a New York vibe and features a big-band jazz section that is led by the piano.

The alternative rock band Texas recorded ‘Inner Smile’ in 2001, and it is featured on the album of the same name. It was written by Gregg Alexander and Rick Nowels. It is based on an unreleased demo of the same name by Alexander. The song was the second single released from Texas’ album ‘The Greatest Hits.’ It peaked at number six on the UK Singles Chart and was a Top 20 hit in Spain, Ireland, the Netherlands, and Italy.

One of the best songs from the ‘Bend It Like Beckham’ soundtrack is ‘Atomic,’ which is a single by the rock band Blondie. Debbie Harry and Jimmy Destri wrote the song, which was featured on the band’s fourth studio album ‘Eat to the Beat.’ Although the album was released in 1979, ‘Atomic’ was not released as a single until the following year. ‘Atomic’ topped the UK Singles Chart and was a top ten hit in countries including Ireland, Belgium, Austria, New Zealand, and Norway.

Is Biden’s Approach to Latin America a Problem?

10 Awesome Songs with “Total” in the Title

The 10 Best Songs for Doing CPR