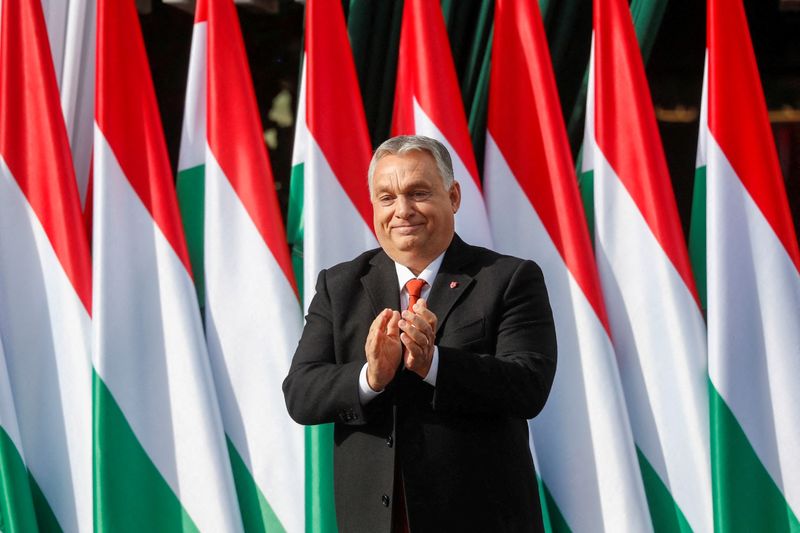 © Reuters. Hungarian Prime Minister Viktor Orban attends the inauguration of Mindszentyneum during the celebrations of the 66th anniversary of the Hungarian Uprising of 1956, in Zalaegerszeg, Hungary, October 23, 2022. REUTERS/Bernadett Szabo

BUDAPEST (Reuters) -Thousands of Hungarians including teachers and students marched through Budapest on Sunday to protest against the government, demanding higher wages for teachers and a curb on surging inflation that is eroding incomes.

Walking across a bridge over the Danube, protesters held up banners like “Orban get lost” and “No teachers, no future,” a few hours after nationalist Prime Minister Viktor Orban pledged to preserve economic stability and maintain a cap on household energy bills even as the EU slides into an “economic crisis”.

But at the latest in a series of anti-government protests participants said his government had let teachers down by giving them meagre salaries, while inflation, which topped 20% in September and is still rising, was becoming unbearable.

“I am here…for my children, there should be change,” said Gyongyi Bereczky, a mail carrier, who joined the protests for the first time. “This runaway inflation… we cannot save up at all anymore, simply we cannot make ends meet as prices are soaring.”

Teachers and students have been protesting for higher wages, a solution to a deepening shortage of teachers, and the right to strike.

As the country marked the anniversary of the 1956 uprising against Soviet rule, Orban, who was reelected for a fourth consecutive term in April, said earlier on Sunday that next year would pose challenges with the war in neighbouring Ukraine.

“A war in the east, and an economic crisis in the West,” Orban told supporters in Zalaegerszeg, about 200 km (124 miles)west of Budapest, adding that there was “financial crisis and economic downturn in the EU”.

“In 1956 we learnt that unity is needed in difficult times… we will preserve economic stability, everyone will have a job, we can defend the scheme of caps on energy bills, and families will not be left on their own.”

Caps on gas and electricity bills have been a key plank of Orban’s policies, but the costs of the scheme surged this year due to soaring energy prices, burdening the state budget. The government was forced to scrap the cap for higher-usage households from Aug. 1.

It is due to amend the 2023 budget in December as the budget law, approved in July, forecast growth at 4.1% next year while inflation was seen at 5.2% — forecasts since rendered obsolete by the surge in prices into double-digits. Economic growth is now expected to slow to 1% next year.

The forint plunged to record lows earlier this month, forcing the central bank to ramp up interest rates in an emergency move.

Facebook warns it could block news in Canada over proposed legislation