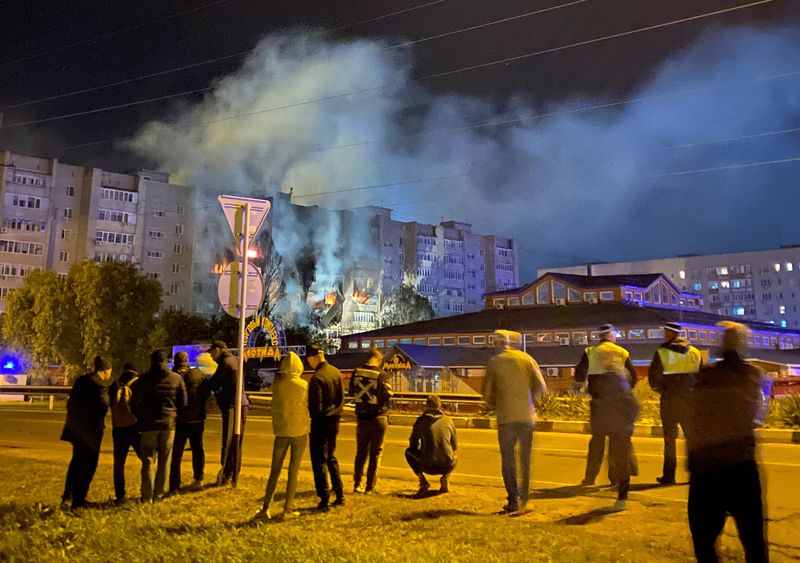 © Reuters. FILE PHOTO: A view shows a site of a plane crash on residential building in the southern city of Yeysk, Russia October 17, 2022. REUTERS/Stringer

YEYSK, Russia (Reuters) – At least 13 people including three children were killed when a Sukhoi Su-34 fighter jet crashed into the courtyard of a nine-storey apartment building and exploded in a fireball in southern Russia just across the Sea of Azov from Ukraine.

The supersonic jet, which the defence ministry said was on a training flight, was seen on video footage speeding across the horizon on Monday with a fire in one engine before a blast and a fireball engulfed the building in the city of Yeysk.

Fire raged through several floors as what appeared to be ammunition exploded in the heat to the shock of onlookers. The crew ejected shortly before the crash and one was shown lying on a street still attached to a parachute webbing.

Russia’s emergency ministry said 19 people had been injured. At least 10 bodies were pulled from the rubble of the building, the ministry said, while 360 people were evacuated.

“Thanks to the professional, competent and prompt actions of fire and rescue units, 68 people were rescued during the search and rescue operation in Yeysk,” Emergency Minister Alexander Kurenkov said in a statement.

Pictures from the scene showed a scorched building and the ash-white remains of the Sukhoi jet beside a blackened tree and a burned-out car next to the apartment building.

“According to the ejected pilots, the cause of the crash was a fire in one of the engines during takeoff,” TASS quoted the defence ministry as saying.

Data Incoming: How to Close the Cyber Data Gap

Fintech Marqeta pushes into banking for next growth phase By Reuters

Marvell shares fall after a ‘significant reset’ By Investing.com