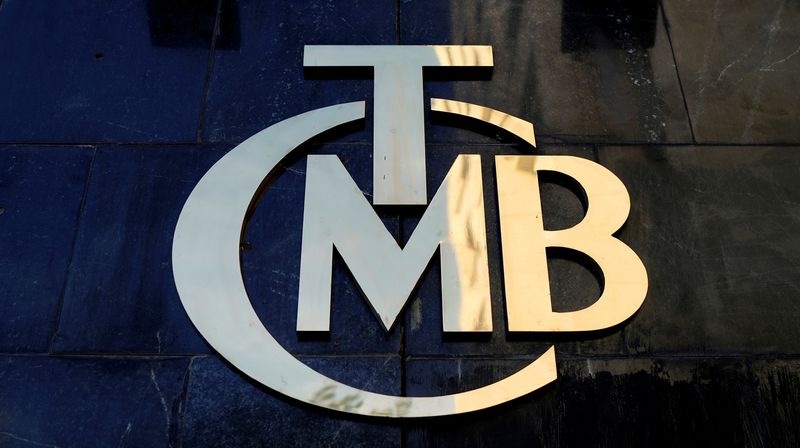 © Reuters. FILE PHOTO: A logo of Turkey’s Central Bank (TCMB) is pictured at the entrance of the bank’s headquarters in Ankara, Turkey April 19, 2015. REUTERS/Umit Bektas

ISTANBUL (Reuters) – Turkey’s central bank delivered another surprise 100 basis-point rate cut on Thursday, sending the lira tumbling to an all-time low, even as inflation rose above 80% and as central banks globally race in the opposite direction and tighten policy.

touched a record 18.42 versus the dollar, surpassing the level reached during a full-blown currency crisis last December. It edged back to 18.37 by 1223 GMT.

Analysts called the monetary easing unsustainable and driven by President Tayyip Erdogan’s effort to lower borrowing costs to stoke exports and investment, and they predicted more currency depreciation ahead. [L8N30T3FS]

Unorthodox rate cuts over the last year, along with rising commodity prices, have sent inflation to a 24-year high and sparked a cost-of-living crisis for Turks.

The central bank justified the move by citing continued indications of an economic slowdown, and it repeated that it expected disinflation, or a deceleration in the inflation rate, to set in.

“Leading indicators for the third quarter continue pointing to loss of momentum in economic activity due to the decreasing foreign demand,” its policy committee said.

“It is important that financial conditions remain supportive to preserve the growth momentum in industrial production and the positive trend in employment,” it said, pointing to increasing uncertainties in global growth and escalating geopolitical risk.

The rate cuts go against a global tightening cycle that saw the U.S. Federal Reserve hike its benchmark overnight interest rate by 75 basis points on Wednesday to a range of 3.00%-3.25%. The European Central Bank also raised its key rates by 75 basis points this month.

Liam Peach, senior emerging markets economist at Capital Economics, said that the “window for easing remains open” but that further cuts would likely be more gradual.

“It may not take a significant tightening of global financial conditions for investor risk sentiment towards Turkey to sour and add more downward pressure on the lira,” Peach added.

Last month, in a previous shock to market expectations, the bank slashed its key one-week repo rate by 100 basis points to 13% to head off a cooling economy. It had left the rate steady the previous seven months.

In the latter part of last year it lowered the rate by 500 basis points in line with an unorthodox policy advocated by Erdogan, leaving real rates deeply negative, which is a red flag for investors.

Turkey’s lira has halved in value in the last year largely due to the policy of cutting rates despite soaring prices.

“As an economist, it is hard to comment on this decision, because normally, higher inflation requires higher interest rates,” she said. “The freestyle monetary policy management costs, and is certainly not sustainable.”

Erdogan has prioritised exports, production and investments under an economic programme aiming to lower inflation by flipping chronic current account deficits to a surplus.

That target is all but unattainable this year due to the surge in energy prices and a global economic slowdown that is likely to hit Turkey’s exports.

Since last month’s cut, the central bank has taken steps that are meant to address the widening gap between the bank’s policy rate and lending rates, sowing confusion for lenders and borrowers alike.

Oil prices fall over 1% ahead of expected U.S. interest rate hike By Reuters