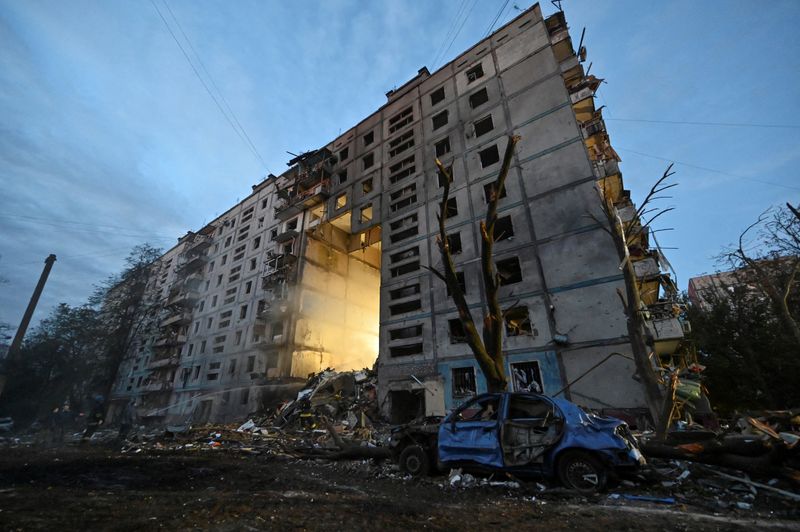 (Reuters) -At least 12 people were killed as a result of shelling in Ukraine’s southeastern city of Zaporizhzhia in the early hours of Sunday, and 49 people hospitalised, including six children, Ukrainian officials said.

A nine-storey building was partially destroyed overnight, five other residential buildings levelled and many more damaged in 12 Russian missile attacks, said Oleksandr Starukh, the governor of the Zaporizhzhia region.

“There may be more people under the rubble,” Starukh said on the Telegram messaging app. “A rescue operation is underway at the scene. Eight people have already been rescued.”

Ukraine’s President Volodymyr Zelenskiy confirmed the number of the casualties and vowed that those who ordered and issued the “merciless” strikes will be hold responsible.

Reuters could not independently verify the reports.

The city, about 52 km (30 miles) from a Russian-held nuclear power plant that is Europe’s largest, has been under frequent shelling in recent weeks. On Thursday, 18 people were killed in an attack.

An overnight shelling on Saturday cut power to the nuclear plant. Kyiv and Moscow have blamed each other for shelling at the Ukrainian-operated facility, which has damaged buildings and threatens a catastrophic nuclear accident.

Parts of the Zaporizhzhia region, including the nuclear plant, have been under Russian control since the early days of Russia’s invasion in Ukraine, but the Zaporizhzhia city, the capital of the region remains under Ukrainian control.

XRP hits 13-month high versus Bitcoin with 35% daily surge — But is a correction inevitable? By Cointelegraph