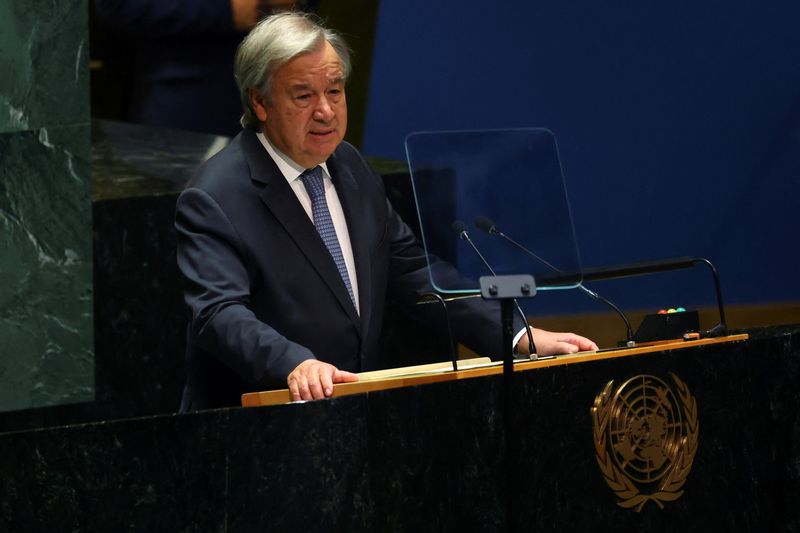 UNITED NATIONS (Reuters) – U.N. chief Antonio Guterres said he spoke with Russian President Vladimir Putin on Wednesday about Ukrainian Black Sea grain exports and that he was hopeful a U.N.-brokered deal would be maintained and expanded to include Russian ammonia.

“To remove the obstacles that still exist in relation to the export of Russian fertilizers is absolutely essential,” Guterres told reporters shortly after speaking to Putin.

The deal included ammonia – a key ingredient in nitrate fertilizer. A pipeline transporting ammonia from Russia’s Volga region to Ukraine’s Black Sea port of Pivdennyi (Yuzhny) was shut down when Russia invaded Ukraine on Feb. 24.

The United Nations is now trying to broker a resumption of those ammonia exports.

“There are … talks in relation to the possibility of Russian ammonia exports through the Black Sea,” said Guterres, adding that there was a “dramatic situation” in the world fertilizer market.

“We are risking to have fertilizer market crunch,” he said. “We have news from different parts of the world where the areas cultivated are much smaller than in the previous cycle, which means that we risk to have in 2022 real lack of food.”

He said there had been some exports of Russian food and fertilizers from Russian ports but they were “much lower than what is desirable and what will be needed.”

The United States and others have stressed that Russian food and fertilizer is not subject to sanctions imposed over Moscow’s invasion of its neighbor, but Russia has asserted there has been a chilling effect on its exports.

The United States said last week it is working with the United Nations to address any Russian complaints.

Despite the success so far of the food and fertilizer export deal, Guterres said that an end to the war was “still far away.”

“I believe that peace is essential – peace in line with the U.N. Charter and international law. But I would be lying if I would say that I hope that it will happen soon,” Guterres said.

Guterres said he also spoke with Putin about prisoners of war, a U.N. fact-finding mission into a July attack in the front-line Ukranian town of Olenivka that killed prisoners held by Moscow-backed separatists, and the Russian-held Zaporizhzhia nuclear power plant in Ukraine.

He said there would be no obstacles from Russia on the fact-finding mission making its way to Olenivka,

A U.N. human rights mission in Ukraine said last week that Russia is not allowing access to prisoners of war and that the United Nations had evidence that some had been subjected to torture and ill-treatment which could amount to war crimes.

“I strongly hope that all prisoners of war from both sides will be exchanged,” Guterres said.

The DEA is investigating Done over ADHD drug prescriptions